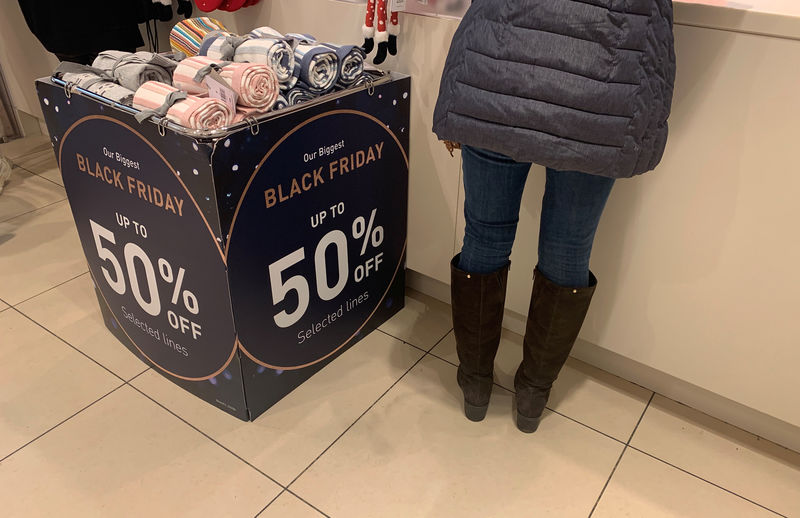 © Reuters. Customer stands next to a container advertising Black Friday offers in a branch of Mamas and Papas in Manchester

LONDON (Reuters) – With harsh lessons learnt from past Black Fridays, British retailers are stretching promotions over several weeks, aiming to smooth out consumer demand and reduce the pressure on supply and distribution networks.

Brought over from the United States by Amazon (O:) in 2010, the annual event started as a single day of discounting before growing into a long weekend that took in ‘Cyber Monday’.

It then grew to a week or so either side and is now getting longer and longer, though after chaos and scuffles in stores in 2014 it is now predominantly an online affair.

With recent consumer spending subdued, Brexit still unresolved and a looming national election creating new uncertainties, retailers are in need of a tonic.

AO went live with Black Friday deals, such as a KitchenAid Artisan Stand Mixer reduced from 449 pounds ($578) to 279 pounds, on Nov. 13 and some deals will run into December.

Dixons Carphone (L:), Britain’s biggest electricals and mobile phones retailer, launched a first wave of promotions on Nov. 13 on products such as laptops, TVs and vacuum cleaners, and deals will run for a few days after Black Friday itself on Nov. 29.

Amazon’s Black Friday Sale runs for eight days from Nov. 22, but it has been running early Black Friday deals this week.

British retailers’ early experiences of Black Friday, when stores were overcrowded, websites crashed and delivery operations were overloaded, showed the folly of concentrating a huge amount of business on one day and then having a relatively flat period afterwards.

“While this may ease the demand on logistics operations over the period, it will mean that shoppers demand ever steeper discounts during Black Friday as they expect something more from retailers during this time,” said Zoe Mills, retail analyst at GlobalData, the data and analytics company.

It forecasts that UK shoppers’ spending in the Black Friday period would rise 2.2% year on year to 4.3 billion pounds.

Black Friday, the day after the U.S. Thanksgiving holiday, is so-called because it was historically the day when retailers would move into profit after months in the red. It traditionally marks the start of the U.S. holiday shopping season.

PwC, the advisory firm, reckons 52% of British consumers are either interested in buying or plan to buy something during Black Friday, with average spend forecast at 224 pounds. But it says consumers are increasingly cynical about the event.

“Some consumers doubt the quality of the deals on offer, with many seeing them as not especially good value or not worthy of interest, and this is likely to have been exacerbated as Black Friday deals have spread to the whole of ‘Blackvember’,” said Lisa Hooker, consumer markets leader at PwC.

Black Friday’s popularity has meant Britain’s Christmas trading season now has three distinct peaks – around Black Friday, the week up to Dec. 25 and the post-Christmas sales.

But nearly a decade after coming to Britain, the event’s worth to retailers still polarizes opinion.

Marks & Spencer (L:) has dabbled with Black Friday in the past but has opted out since 2015. CEO Steve Rowe says his focus is on improving M&S’ value all year round.

“That’s the way to deliver great value for customers, not one off promotions, so we won’t be taking part.”