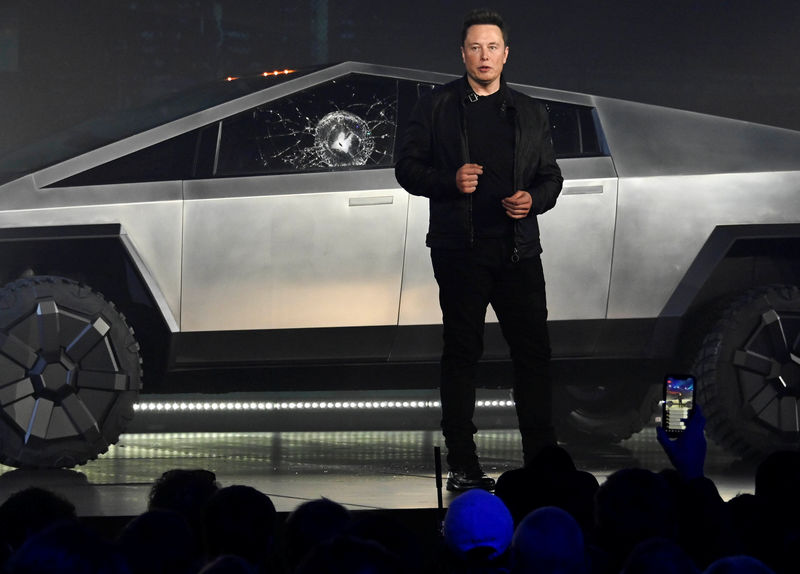 By Nick Carey and Naomi Tajitsu

DETROIT/TOKYO (Reuters) – Tesla Inc’s (O:) launch of its futuristic Cybertruck pickup suffered a setback when its “armored glass” windows shattered, but it was the overall look of the car that worried Wall Street on Friday, and the company’s shares fell more than 6%.

In the much-anticipated unveiling to cheering fans late on Thursday, Tesla boss Elon Musk had taken aim at the design, power and durability of mainstream trucks, only to be shaken when his boast about his new vehicle’s windows backfired.

“Oh my fucking God, well, maybe that was a little too hard,” Musk said, when his head of design, Franz von Holzhausen, cracked the driver’s side window with a metal ball in a series of tests for the crowd at the event in Los Angeles.

He allowed von Holzhausen another throw to the rear passenger window, only to see that crack as well.

“It didn’t go through, so that’s a plus side,” Musk said, adding: “Room for improvement.”

Musk singled out the Ford (N:) F-150, the top-selling vehicle in the United States, to highlight the capabilities of the Cybertruck, showing an edited video of the two trucks in a back-to-back “tug-of-war” in which the Tesla truck wins.

Some Wall Street analysts praised the launch on Friday, but others doubted the futuristic design’s mass appeal. Tesla shares were down 5.7% at $334.68. Ford shares rose around 1%.

“Musk has been enthusiastic about his Blade Runner-inspired design for months, but we were still surprised how futuristic he went with this one and believe it may shatter his dreams,” Cowen analysts wrote in a note.

“While we are pleased to see Tesla enter the most profitable segment of the North American passenger car market, we do not see this vehicle in its current form being a success.”

The U.S. pickup truck market is one of the world’s most profitable vehicle segments and is dominated by Ford, General Motors Co (N:) and Fiat Chrysler Automobiles NV (FCA) (MI:) (N:).

Pickup buyers are fiercely brand loyal and are viewed as traditional in their choice of vehicle.

Karl Brauer, executive publisher at Kelley Blue Book and Autotrader, said Ford, GM and FCA would breathe a sigh of relief after seeing Musk’s truck because he was trying to sell too much – a new technology and an outlandish design.

“There are fans out there who’ll buy anything with a Tesla badge on it, but this will unlikely pierce the meat of the truck market,” Brauer said. “Tesla is putting up too many barriers for people nervous about stepping out of their comfort zone.”

Online critics also made fun of the space-craft style look.

“I wish Elon Musk hadn’t blocked me on Twitter after I said his Mars colonization idea was dumb, so I could tell him how ugly his new #Cybertruck is,” tweeted author @MarkDice, who has 1.5 million YouTube followers.

With a starting price of $39,900, the Cybertruck takes aim at the heart of Detroit automakers’ profits, while drawing familiar support from Tesla watchers online.

“Yes, it looks like a retro version of the future. It’s supposed to. The incredibly simple body lines will lead to incredibly simple manufacturing, while keeping the focus on its performance,” said @AElchamaa.

“Electric power-trains are not cheap, but this truck is giving you a lot of it for its money.”

To show off the robust design of the new pickup, Musk asked von Holzhausen to take a sledgehammer to the side of the vehicle, whose exterior will be made from the same stainless steel used in the Starship rocket developed by Musk’s SpaceX aerospace company.

The crowd cheered when the hammer bounced off the surface without leaving a mark.

But the supposedly tough windows shattered with just one hit.

“Never demonstrate something in a live audience, that you haven’t tried repeatedly backstage,” wrote another Twitter user, @DrBenH.

JP Miller, CEO of Paul Miller Ford in Lexington, Kentucky, sells an average of 100 new Fords a month, around 40% of which are pickup trucks. Many of them are work trucks and Miller said when watching Tesla’s unveiling on Thursday night he could not see any of his customers wanting a Cybertruck.

“I have to say, I was a little confused,” Miller said. “Pickup trucks are critical for building America and I couldn’t see how that could apply to Tesla’s truck.”