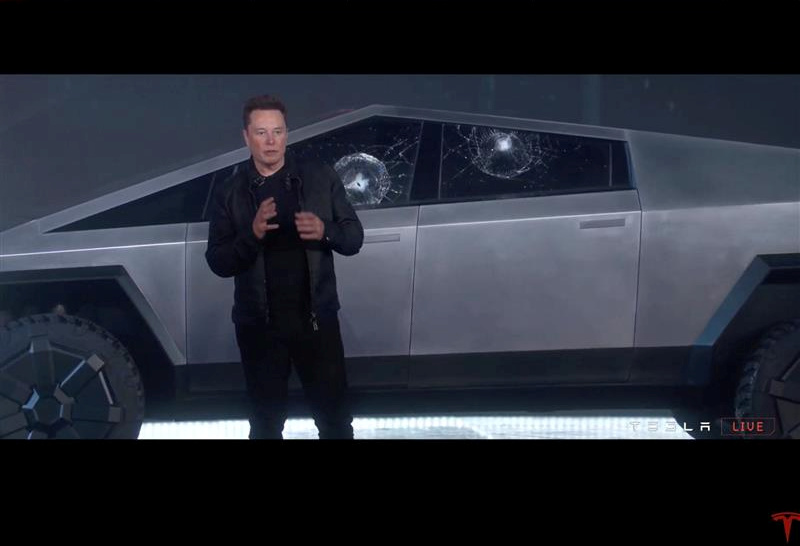 During the tightly choreographed unveiling of the Cybertruck to cheering fans on Thursday, Tesla boss Elon Musk had taken a stab at the design, power and durability of mainstream trucks, only to be shaken when his boast about his new truck’s windows backfired.

With a starting price of $39,900, the Cybertruck’s futuristic, angular body in gun-metal grapy resembles an armored vehicle and takes aim at the heart of Detroit automakers’ profits.

Musk singled out the Ford F-150, the top-selling vehicle in the United States, to highlight the capabilities of the Cybertruck, showing an edited video of the two trucks in a back-to-back “tug-of-war” in which the Cybertruck takes off, dragging the F-150 behind it shortly after both trucks accelerate from starting position.

To show off the robust design of the new pickup, Musk enlisted his head of design, Franz von Holzhausen, to take a sledgehammer to the side of the vehicle, whose exterior will be made from the same stainless steel used in the Starship rocket developed by Musk’s SpaceX aerospace company.

The crowd cheered when it bounced off the surface without leaving a mark.

But the truck’s windows were not as fortunate, cracking like spiderwebs when von Holzhausen threw metal balls at them.

The blunder overshadowed the launch, which was live-streamed from Los Angeles and made #cybertruck a trending word on Twitter.

“Oh my …, well, maybe that was a little too hard,” Musk said, looking with surprise at the cracked driver’s side window.

Still, he allowed von Holzhausen another throw to the rear passenger window, only to see that crack as well.

“It didn’t go through, so that’s a plus side” he said, adding: “Room for improvement”.

Reactions on Twitter varied including some advice on product launch and planning.

“Never demonstrate something in a live audience, that you haven’t tried repeatedly backstage,” wrote @DrBenH, while @JustinParayno wrote “I see it as a positive because @elonmusk’s decision to test it live hopefully will cause @Tesla to be more cautious and make sure the sold Trucks will not crack.”

Others were more optimistic.

“I personally don’t care that the glass shattered any other vehicle’s glass would have broken down completely,” wrote @Kev112301, while @erikwray posted “There will be hiccups and they’ll get worked out. The #Tesla cars are amazing and only get better over time.”

Tesla plans to start manufacturing the truck around late 2021.