Devitt raised his rating to buy, after initiating Uber at hold in July. He kept his stock price target at $34, which is 15% above current prices, but 24% below the $45 initial public offering price. Uber went public on May 10.

“Some competitive rationalization in ridesharing and related progress in reining in costs has pulled forward breakeven expectations meaningfully versus six months ago,” Devitt wrote in a note to clients. “Management has set a 2021 target of profitability, which may be plausible though is not priced into the stock, in our view. Valuation is more constructive here.”

Devitt said there are several key points relating to Uber fundamentals that have changed since he started covering Uber that now make him bullish:

Lower levels of industry couponing in Uber’s Rides business, specifically in the U.S., and the rationalizing of driver incentives has helped the company “meaningfully” outperform loss expectations year to date, and puts Uber in position to beat full-year expectations by a wide margin.

Uber disclosed segment-level details for the first time in its third-quarter report, including bookings, revenue and underlying earnings by business.

The numbers showed that even when allocating 100% of the $623 million segmented to corporate overhead to the Rides business, that business broke even in the third quarter.

“Incremental [year-over-year] Rides margin of 40%+ suggests further room for scaling of the Rides business,” Devitt wrote. “One the downside, Eats is highly unprofitable, though the company has outlined a more concrete plan to improve this segment.”

Also read: Uber earnings provide yet another look at the challenges of food delivery.

Management plans to invest aggressively in Eats markets where the company can establish or defend a #1 or #2 market position over the next 12 to 18 months. For the markets that Uber can’t win, the company said it will dispose of assets or consider acquisitions that would boost market share.

“We find it encouraging the company has put a timetable on improving or exiting unprofitable Eats markets,” Devitt wrote. “Along these lines, in September, the company exited the South Korea food delivery market amid tough competition.”

Key point #4 — Some additional reasons for the new bullish stance

• Uber’s latest disclosures indicate that was only a 20% overlap between monthly active platform consumers (MAPCs) for its Rides and Eats businesses, which implies there are significant potential runways for synergies, including lower-cost user acquisition. “Synergies between Rides and Eats products are still early, but could be a tailwind,” Devitt said.

• There is potential equity value support if Uber decides to realize the value of its investments in Didi, Grab and the Yandex.Taxi joint venture. And Devitt says current market valuations credit “little, if any” value for Uber’s Freight subsidiary. “The market perception could change as Freight continues to grow the business,” Devitt said. He said there may be additional value-creation opportunities in Uber’s Advanced Technologies Group business as well, which currently isn’t getting much valuation credit even though it has received $1.5 billion in outside investments at a valuation of $7.25 billion as of April from Toyota, Denso and Softbank.

• One of the key overhangs on Uber’s stock is uncertainty regarding labor classifications, including California AB5, which restricts how companies can classify workers as contractors rather than full-time employees who are entitled to benefits. Devitt said Uber and other rivals have indicated there have been “constructive discussions” with lawmakers and say they are “optimistic” that a middle-ground solution can be reached. “There is risk to the California regulatory situation but believe at current [share price] levels the sentiment more than reflects to the risk relative to Uber’s exposure,” Devitt wrote.

Devitt the least bullish of the Uber bulls

Devitt certainly isn’t the only Wall Street analyst that is bullish on Uber’s stock, but he is the least bullish.

Of the 37 analysts surveyed by FactSet, 25 analysts, or 68%, have the equivalent of buy or overweight ratings. Of those bulls, Devitt’s price target is the lowest, as the others’ targets range from $40 to $64.

The average target of all the analysts is $44.88, which is 52% above current levels but fractionally below the IPO price.

SunTrust Robinson Humphrey’s Youssef Squali reiterated Friday the buy rating and $56 stock price target he’s had on the stock since initiating coverage of Uber in June. He said the stock has likely “bottomed out,” as the new Rides profitability disclosure provides “valuation support.”

Squali said now that the expiration of the IPO lock-up agreement on Nov. 6, which Squali estimates freed up about 1.2 billion shares to be available for sale, is no longer an overhang, Uber’s valuation can “catch up” to Lyft’s.

“Uber’s category position in Rides, platform approach, management experience and investment stakes (particularly in Didi and Grab) should garner a premium multiple relative to Lyft over time, given its larger [total addressable market] and scale,” Squali wrote in a research note.

Fundamentals may be ‘turning the corner,’ but technicals aren’t quite there yet

Some simple readings of Uber’s stock chart suggest the stock has a little further to go before technicals can support the bullish case. 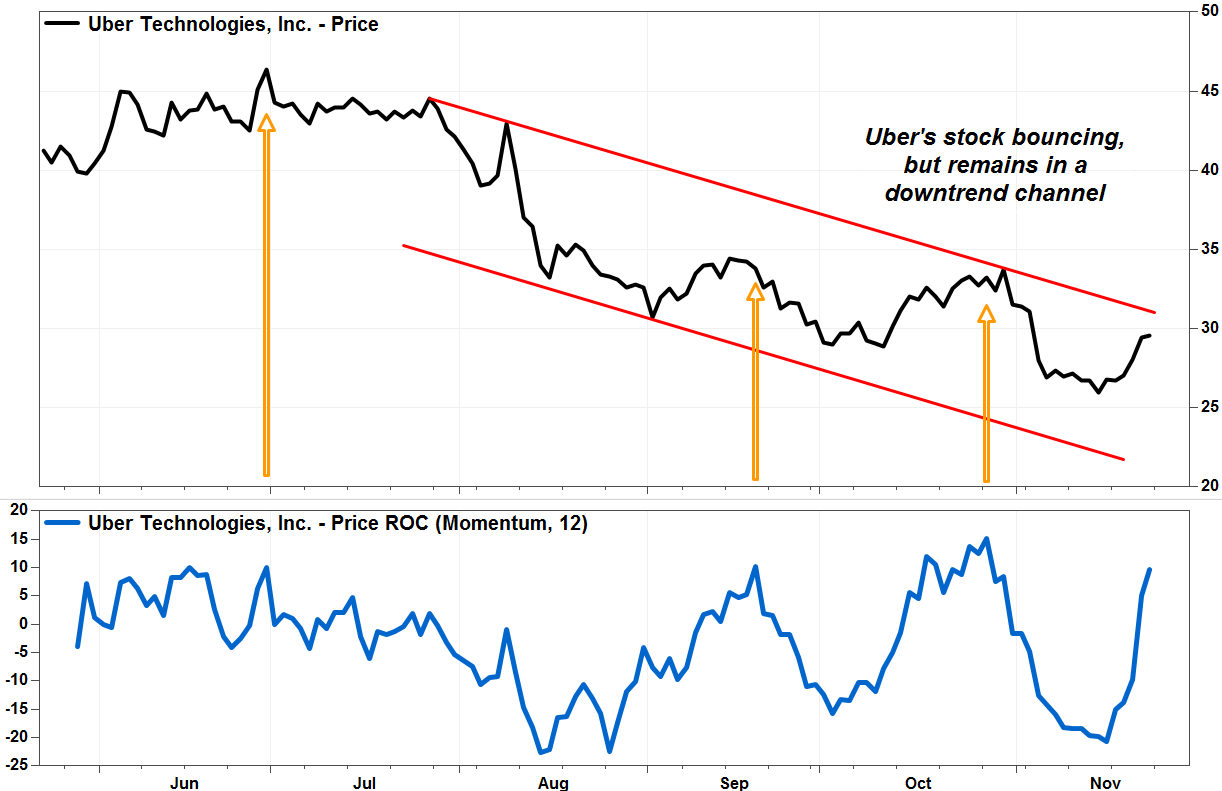 The stock remains below a trendline, and within a channel, that has tracked the downtrend since the highs since Devitt started covering the stock. It would take a close above the top downtrend line, which currently extends to about $31, to register a breakout, and suggest a new uptrend may have started.

Separately, the stock’s momentum indicator, which measures the magnitude of gains relative to the magnitude of declines over a specific time period suggests an overbought technical condition, as it has reached levels that previously coincided with pullbacks in price.