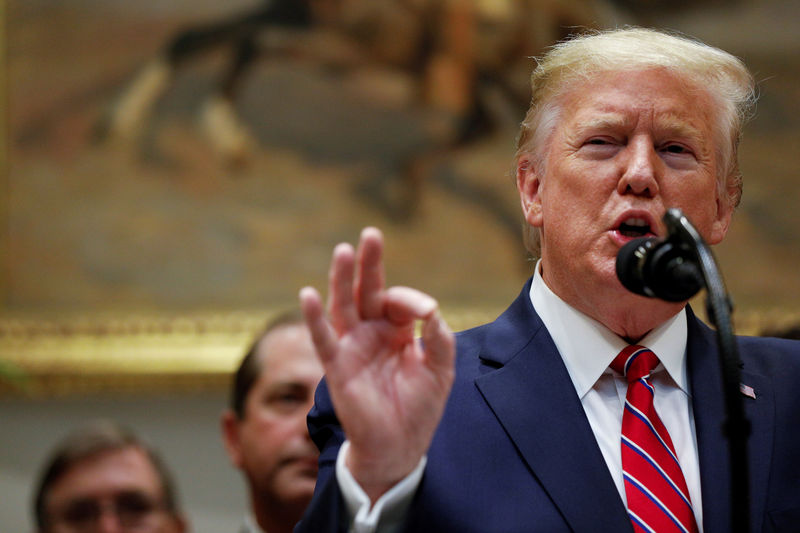 WASHINGTON (Reuters) – U.S. President Donald Trump said on Friday that he alone was preventing China from crushing protesters in Hong Kong with a million soldiers, as he defended his attempts to strike a trade deal with Beijing amid fears of a Chinese crack down on the demonstrations.

In one of his most bombastic statements yet over relations with China, Trump said in a television interview he had told Chinese President Xi Jinping that clamping down on the Hong Kong protesters would have “a tremendous negative impact” on efforts to reach an accord to end a 16-month trade war between the United States and China.

“If it weren’t for me Hong Kong would have been obliterated in 14 minutes,” Trump told Fox News Channel’s “Fox & Friends.”

“He’s got a million soldiers standing outside of Hong Kong that aren’t going in only because I ask him please don’t do it, you’ll be making a big mistake, it’s going to have a tremendous negative impact on the trade deal and he wants to make a trade deal,” Trump added, referring to Xi.

Trump was asked what he planned to do about calls from some quarters for him to veto congressional legislation supporting the Hong Kong protesters that has greatly angered China and appeared to link it with the trade deal he has been seeking, but gave no clear answer.

“Look we have to stand with Hong Kong, but I’m also standing with President Xi. He’s a friend of mine. He’s an incredible guy. We have to stand.

“But we also are in the process of making the largest trade deal in history and if we could do that that would be great … If it weren’t for me thousands of people would have been killed in Hong Kong right now and you wouldn’t have any riots you’d have a police state.”

Trump added that a trade deal with China was “potentially very close.”

The U.S. Congress on Wednesday gave final approval to a bill that would put the special treatment Hong Kong enjoys in U.S. law under tighter scrutiny linked to the extent of Hong Kong’s autonomy from Beijing, and threatens officials responsible for human rights violations with sanctions.

The president has 10 days, excluding Sundays, to sign a bill passed by Congress, unless he opts to use his veto powers.

Months of increasingly violent street protests in Hong Kong have raised fears that China might send troops from the mainland to crush the unrest, but there has been no sign of the massive intervention Trump referred to.

In August, Beijing moved thousands of troops across the border into Hong Kong in an operation state news agency Xinhua described at the time as a routine “rotation,” but the city’s government has said the mainland army is not part of Hong Kong police operations to quell the demonstrations.

On Saturday, Chinese army troops from the small garrison stationed in Hong Kong helped to clean bricks and debris left behind by protesters at a university campus, the first time they have been seen out on the streets since the start of the unrest in June. Hong Kong leader Carrie Lam said this move should not be “over interpreted.”