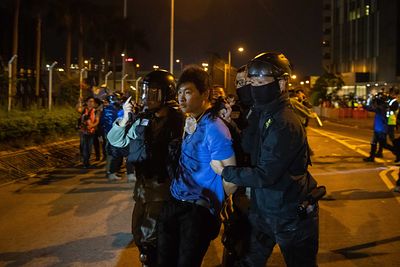 Police detain protesters and students in Hong Kong on November 19

As protests in Hong Kong reached fever pitch this week with police placing a number of protester-occupied university buildings under siege, using rubber bullets and tear gas to dislodge demonstrators, global markets have largely shrugged off these events. Even a move by the U.S. Congress which passed the Hong Kong Human Rights and Democracy Act, complicating the ongoing U.S.-China trade talks, failed to unduly worry investors.

Investors and analysts interviewed by MarketWatch offered several explanations for why the conflict in Hong Kong can safely be ignored, but others worried that its escalation is just another in a series of signals that chances for a U.S.-China trade deal are much slimmer than markets realize.

U.S. Congress turns up the heat

One reason for optimism is that the Hong Kong Human Rights and Democracy Act, which passed both houses of Congress with large majorities and awaits President Trump’s signature, is mostly symbolic protest against mainland China’s Hong Kong policy, according to Andrew Coflan, China analyst at the Eurasia Group.

In other words, the bill doesn’t materially change the dynamics of the U.S.-China trade negotiations other than giving President Trump another arrow in his quiver in the trade war, one he may very well decline to use. In an interview Friday on “Fox & Friends” the president was noncommittal about whether he’d sign the bill, saying “We have to stand with Hong Kong, but I’m also standing with President Xi.”

Since 1992, U.S. law has given Hong Kong a special status that relieves it from tax, trade and visa policies that govern relations between the U.S. and mainland China. Hong Kong exports, for instance, are not subject to recent tariffs imposed on the rest of China. An estimated $38 billion in trade between Hong Kong and the U.S. could be jeopardized if Hong Kong’s special status is jeopardized.

The U.S. also has its own reasons for not rocking the Hong Kong boat. It offers U.S. companies a relatively safe way to access the Chinese market and uses a U.S. dollar peg, linking it with the American financial system. According to the Congressional Research Service, some 290 U.S. companies have their regional headquarters in the city that year and another 434 had regional offices.

A History of Dissent in Hong Kong

Meanwhile, the current Hong Kong protests are not the first clash between citizens and Beijing in recent years. “A lot of investors use history to project what will happen in the future,” said James McDonald, chief executive officer of Hercules Investments.

“If you look at previous protests that took the Hang Seng index down — the umbrella movement in 2014, anti WTO protests in 2005, and even the Tiananmen sympathy protests in 1989,” none of these suppressed equity valuations in Hong Kong for very long, let alone U.S. markets, he said. “There is a perception among investors that these protests will fizzle out,” as did previous movements.

Neil Hennessy, chairman at Hennessy Funds argued that investors would be best off ignoring the events in Hong Kong and the broader U.S.-China trade deal, given the limited impact the conflict has had on the U.S. economy and equities markets. “Tariffs scared everybody, they were going to cause inflation to go through the roof, and cause Americans to pay 25% more for all our products, and that turned out to be just noise,” he told MarketWatch.

He said that U.S. companies have so far successfully forced Chinese manufacturers to eat the cost of tariffs, while arguing that the Chinese economy is increasingly fragile and that the government there will eventually accept a deal that benefits the U.S.

There are also reasons to doubt whether reaching a trade deal is actually in the interests of the Chinese or President Trump.

“The market has just latched on to this notion that we have to get a deal because Trump loves the stock market and he needs a strong economy to win in November, ergo a deal will get done,” said Brian McCarthy chief strategist at Macrolens. “But I’m not convinced the president believes the trade war is that big of a deal to the U.S. economy.”

Unless China clearly capitulates to the U.S. demand to retain tariffs as an enforcement mechanism and also agrees to make substantial changes with respect to subsidization of industry, “Trump rolling back tariffs would be politically tone deaf,” McCarthy said.

“Given how this bill has rolled through the U.S. Senate, there’s bipartisan support for opposing China,” he added. “It’s one issue that Trump can claim leadership on, why would he give that up?”

Events could overtake the current state of play though, with District Council elections due in Hong Kong on Sunday, Nov. 24. Eurasia Group’s Coflan said that after the siege, the pro-democracy movement will focus on this event to maintain the momentum of the protests.

If Beijing forces the elections to be delayed — and officials have already drafted contingency plans to postpone them until Dec 1 — it could “signal further erosion of civil rights and democratic norms,” Coflan said, potentially exacerbating protester response and police countermeasures and fan the flames of public opinion in the US against compromise with China.

They also will provide a measure of public opinion in Hong Kong. If pro-democracy candidates have a strong showing and attract healthy turnout, that would indicate that the Hong-Kong citizenry have the stamina for a prolonged clash with mainland China.

With an ongoing stalemate in U.S.-China trade negotiations, investors will be eager for signs that the trade war is not slowing the U.S. economy materially and the coming holiday-shortened week will provide a bevy of such indicators.

On Monday, the Chicago Federal Reserve will issue its national activity index, while Tuesday will feature the release of data on the U.S. trade deficit, the Case-Shiller home price index, the Conference Board’s consumer confidence index and data on new home sales in October.

On Wednesday, investors will get a reading on weekly unemployment claims, a revision of the Commerce Department’s estimate of third-quarter GDP growth, data on durable goods orders and core capital expenditure orders, a key measure of business investment. The day before the U.S. Thanksgiving holiday, on Thursday Nov. 28, will also see data on pending home sales, personal income and spending as well as the Fed’s preferred measure of inflation.

On Thursday stock markets will be closed for the Thanksgiving holiday, and will close at 1 p.m. Eastern Time on Friday.