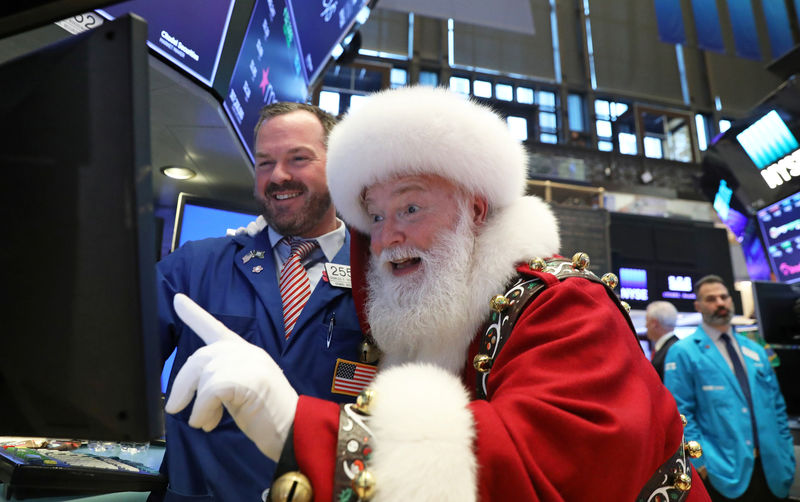 NEW YORK (Reuters) – (This November 22 story has been refiled to add dropped word in paragraph 12.)

A year after the U.S. stock market plunged, many investors believe conditions are in place to avoid another year-end pullback and possibly set the stage for a rally to finish off 2019.

A more accommodative Federal Reserve compared with a year ago is an important argument for investors who are confident the market is unlikely to see a repeat of 2018’s swoon.

Last year, investors were concerned the Fed was raising interest rates too quickly. By contrast, the Fed has been cutting rates this year, and while the central bank is not expected to lower rates again in December, it also is not expected to raise them.

Another change from a year ago, cited by investors: Stock markets globally are more synchronized in their strong performance.

“The prospects this year are better,” said Michael Antonelli, market strategist at Robert W. Baird in Milwaukee. “It’s not just the U.S. that’s doing well right now. It’s happening in lots of places around the globe, and that puts investors in a more risk-taking mood.”

One wild card for markets heading into year-end is the United States’ trade war with China. The dispute remains unresolved, but there is optimism about a preliminary U.S.-China trade agreement that could also lift stocks into the new year.

The index’s 2.7% collapse on the eve of the Christmas holiday marked the bottom, and the S&P 500 () registered its biggest percentage decline for a fourth quarter since 2008, the height of the financial crisis.

“It’s in the back of everyone’s mind. We’re all worried if there’s going to be another big selloff in December,” said Ryan Detrick, senior market strategist at LPL Financial in Charlotte, North Carolina.

“We don’t think so,” he said. What’s more, with the current strength in markets globally, “you could have a chase into the end of the year.”

Equity indexes around the world have joined U.S. stock averages in recent weeks in setting new highs. So far this year, Europe’s Stoxx 600 () is up about 19% and recently hit its highest level in more than four years.

With stock performance at the very end of the year, there is often more at stake than just feeling good around the holidays.

The last five trading days of the year and the first two of the new year comprise the traditional Santa Claus rally, according to the “Stock Trader’s Almanac.”

In 2018, the market bounced back after its Dec. 24 plunge, resulting in an overall gain of 1.3% for those seven trading sessions – right in line with the historical average, based on the almanac’s data going back to 1950.

But any absence of a Santa Claus rally could portend rough times for the market in the months ahead.

“Santa’s failure to show tends to precede bear markets, or times stocks could be purchased later in the year at much lower prices,” the almanac says.

A year-end rally could be derailed by any upset on the U.S.-China trade front.

“We’re six weeks removed from the announcement there was going to be a trade deal between the U.S. and China, and it doesn’t seem like we’re necessarily closer to hearing about that deal or what it entails,” said Brian Nick, chief investment strategist at Nuveen in New York.

Yet, “the market has continued to push higher on most days on optimism the two sides are still talking. So there’s room for disappointment there for sure.”

Also, Nick said, the market could have trouble rallying into year end given the recent sharp move up. “It feels like we maybe we got the Santa Claus rally a little bit early this year.”

Any sign of disappointing sales over Black Friday and the holiday season could be another risk, strategists said.

But there are plenty who still expect holiday cheer for Wall Street this year, and upbeat news on trade would only add to that view.

“Between now and the end of the year, I’m assuming there will be a Santa Claus rally,” said Tim Ghriskey, chief investment strategist at Inverness Counsel in New York.