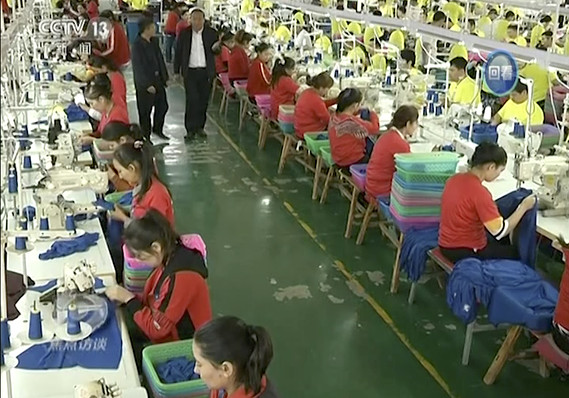 Trainees work in a garment factory in China. High U.S. tariffs have had a puzzling lack of impact on the price of Chinese imports.

Steep U.S. tariffs on most Chinese goods have had a puzzling lack of influence on import prices, raising questions about who exactly is paying the lion’s share of higher duties.

It’s not the Chinese, at least not directly. American businesses and consumers are bearing the biggest direct cost of billions in dollars in U.S. tariffs, a wave of research has found.

What’s far less clear is how the burden is split, according to the New York Federal Reserve.

The Trump administration launched its first broadside against China in July 2018 with a round of tariffs. Duties up to 25% have since been levied on some $370 billion in imports, encompassing most Chinese goods sent to the U.S. market each year.

Tariffs are collected when Chinese products enter ports in cities such as Los Angeles, Miami and Savannah, Ga. They are paid by the U.S.-based companies that receive the goods.

One thing is quite clear, the Fed study said. Chinese companies themselves haven’t swallowed most of the cost tied to U.S. tariffs, as President Donald Trump has frequently contended.

Chinese firms could have cut prices to ease the financial burden on their American partners, the Fed said, but the reduction would have had to equal about 20% to fully offset the effects of a 25% tariff.

Instead Chinese prices have fallen just 2% or so since the tariffs first went into action.

“This drop is a small fraction of the amount required to offset the increase in tariff rates,” the New York Fed said.

Even that doesn’t appear to be noteworthy. The cost of imports from countries not affected by the tariffs, such as Mexico and South Korea, have fallen by about the same amount.

The Chinese currency USDCNY, -0.0398%, meanwhile, has declined 10% in value vs. the dollar since tariffs were enacted. So Chinese suppliers could in theory cut prices they charge U.S. importers by the same amount to relieve the harm.

Instead, Chinese companies seem to have padded their own profits to offset the decline in demand tied to U.S. tariffs, the Fed said.

Read: It’s great the stock market is setting records, but it’s not because economy is great

Their profit margins may already be razor thin. They might not have many competitors. Or they may worry that cutting prices for U.S. customers will spur non-U.S. customers to demand the same, the Fed said.

Whatever the case, there’s no doubt that demand for Chinese goods has abated. In fact, the U.S. has raised just two-thirds of the revenue through tariffs that should have been expected largely because of a decline in Chinese imports.

The Fed said imports of Chinese products affected by U.S. tariffs have fallen by an annualized $75 billion. That’s a huge chunk of business that’s gone to Europe, Japan and other Asian countries.

These are the kinds of losses that have pushed China to resume negotiations with the U.S. The two countries are struggling to announce the first step of a broader agreement. 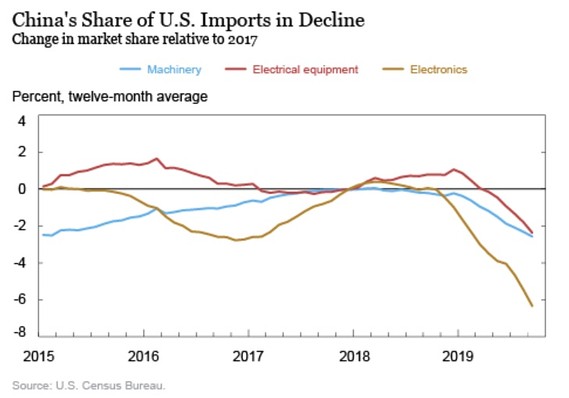 China’s share of the U.S. market for machinery and electrical equipment, for example, has fallen about 2 percentage points since 2017. And it’s portion of the U.S. electronic market has tumbled 6%.

“Regardless of whether consumers or businesses bear the burden, sustained high tariffs on Chinese goods will encourage a search for alternative suppliers,” the New York Fed said in a report written by researchers Matthew Higgins, Thomas Klitgaard and Michael Nattinger.

One caveat: Some companies may be shifting the final stages of production for goods largely made in China to third countries to avoid the tariffs. How much is impossible to say.

It’s even harder to figure out how the cost of tariffs is split, the Fed said, between U.S. wholesalers at the port of entry, retailers who sell the products and consumers who eventually buy them.

The Fed pointed out there’s not much data or research to make accurate estimates because heavy tariffs largely fell into disuse among the wealthiest nations after World War Two.

The most likely scenario is that U.S. companies have largely absorbed the cost of tariffs by accepting lower profits given the strong resistance by customers to higher prices. Companies have been unable to raise prices very much for years.

There’s one other intriguing possibility, the Fed suggested: Companies may be leaving reported import prices unchanged to reduce their U.S. profits and lower their tax burden.