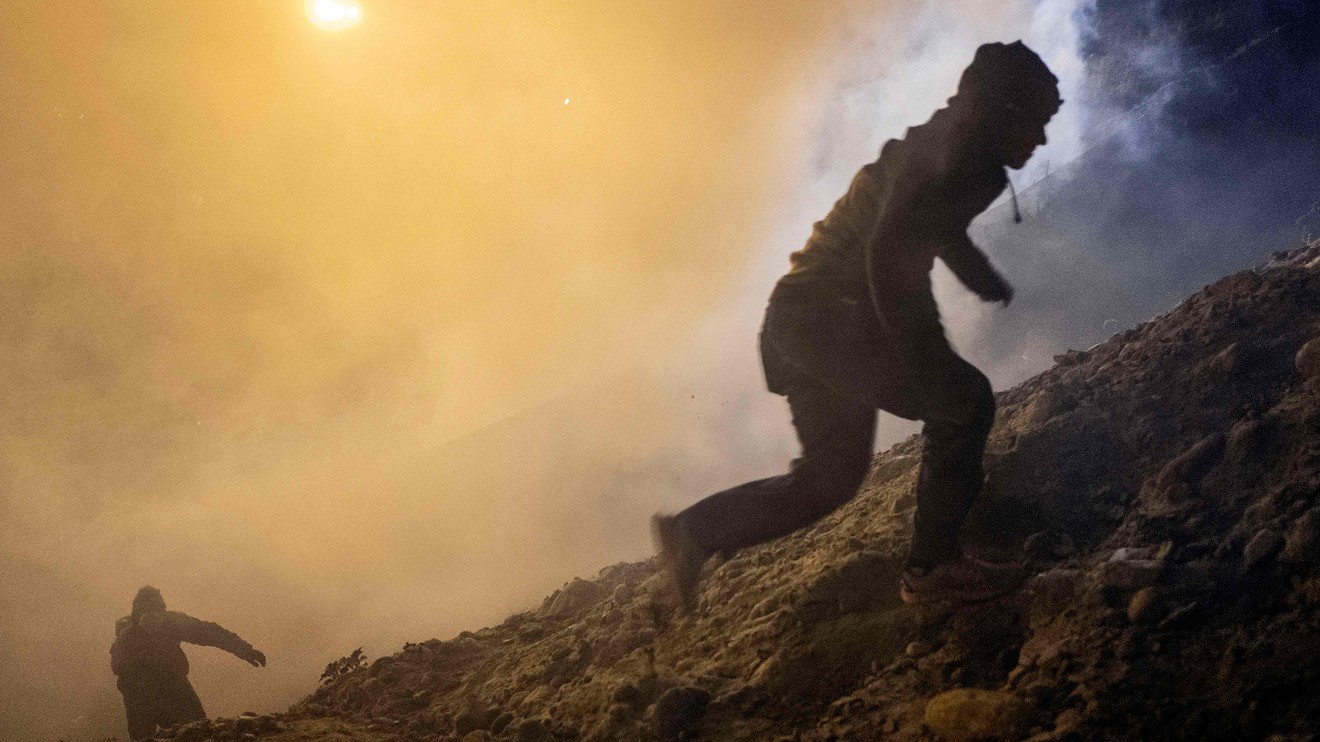 Executives from KKR & Co. Inc. have raised more than $1 billion in 2019 for their “impact fund“ as the alternative investment firm has made respect for human rights one of the tenets of its private-equity business.

Yet some analysts say at least one holding that KKR manages is at odds with its declaration that it is taking greater account of investments that pose environmental, social and governance risks, or ESG. In April 2018, KKR’s KKR, +0.28%  corporate credit arm entered into an investment advisory partnership that included oversight of a debt and equity stake in a producer of tear gas, anti-riot bullets and other crowd-control gear.

The tear gas produced by Safariland LLC’s brands have been used against demonstrators in Puerto Rico, Turkey and even in America over the past decade, according to news reports and researchers.

Under its partnership with FS Investments FSK, +0.33%, KKR continues to manage two Safariland loans valued at around $121 million and more than $6 million of equity, which represents at least 5% of the company’s equity, based on company filings.

The stake in Safariland, which also manufactures a variety of other equipment for law enforcement and military markets, was acquired as a portion of a much larger portfolio involving six business development companies affiliated with FS Investments. Representatives for Kanders and Safariland, and FS Investments declined to comment.

“KKR can’t have it both ways,” said Mayra Rodriguez Valladares, managing principal at capital markets consulting firm MRV Associates. “If it really has ESG policies, it can’t be involved in any way, shape and form with Safariland,” she said.

“They can sell the loan. They are not obligated to keep it,” she said, referring to KKR’s stake in Safariland.

Several ESG investing professionals interviewed by MarketWatch said KKR’s exposure to tear gas companies could be problematic to its credibility as a responsible investor.

At the same time, most ESG-friendly money managers don’t have ready views on whether investments in tear-gas companies are appropriate in part because few have ever lent money or held stakes in such firms, according to Sonya Dreizler, a financial services consultant on sustainable investing.

A KKR spokesperson said that it inherited investments in the company as part of that larger deal in 2018 and didn’t have the opportunity to screen out individual companies.

Industry publication Private Debt Investor reported that the original decision to invest in Safariland was made by Blackstone’s credit arm when it ran the same business development company under FS Investments’ name, before it came under KKR’s management. Blackstone declined to comment.

“All of the deals didn’t go through our normal process that we undertake when sourcing and selecting new investments, but we did review all of the companies for major ESG issues (and overall performance) and continue to review the portfolio periodically,” the KKR representative told MarketWatch.

Since KKR started running the business-development company, FSK, +0.33%  — tax-advantaged investment vehicles designed to extend credit to small and medium businesses—KKR has been shifting the portfolio to deals they had sourced, which applied to around three quarters of the holdings, the spokesperson said.

The loans and equity in Safariland I can are held in an investment vehicle that is separate from KKR’s dedicated impact fund. Though KKR’s ESG policy says it would respect the human rights of those affected by its investment activities, this policy only applies to its private equity assets.

The money manager’s annual report outlining its progress on ESG issues said one of its goals was to also develop a “more comprehensive responsible investment approach for our credit business” by the end of 2019.

Outrage over the use of Safariland’s anti-riot equipment against civilians at the U.S.’s southern border in 2018 later prompted the resignation of Warren Kanders, Safariland’s multimillionaire owner, from the board of trustees for the Whitney Museum in July.

In the 2019 Whitney Biennial exhibition, research consultant Forensic Architecture described in a video how they identified tear-gas canisters from Defense Technology, a Safariland brand, that had been fired by U.S. border agents into a throng of migrants, including children, at the U.S.’s southern border with Mexico.

Defense Technology’s tear gas has also been deployed against anti-austerity demonstrations in Puerto Rico, in Istanbul, Turkey, and in the U.S. town of Ferguson, Mo., based on news reports and photos analyzed by Omega Research Foundation and Forensic Architecture.

The company also produces less controversial gear. Warren Kanders was quoted as saying in a Forbes profile that the majority of Safariland’s revenues came from the sale of body armor, and that “people need to be protected and police officers with families are living today because of what I do, what our company does.”

Other private-equity firms have had a history of holding stakes in tear gas manufacturers, with Palm Beach Capital listing Safariland as a current portfolio company on its website and Carlyle Group investing in a minority equity stake in Combined Systems, Inc., whose products have been used to disperse Hong Kong demonstrators.

The Carlyle fund holding Combined Systems’ stock has been closed, and its assets sold off. Palm Beach Capital didn’t reply to requests for comment, and Carlyle declined to comment.

Though ESG-inclined money managers will look to avoid manufacturers of controversial weapons, a narrowly defined group including cluster bombs but not tear gas, it became a “trickier” issue for companies that have a smaller proportion of their business involved in these sectors, said Lori Heinel, deputy global chief investment officer at State Street Global Advisors.

The use of tear gas and other crowd-control equipment to deal with protests can be viewed as an ethical alternative to lethal firearms, said a few specialists on ESG investing. A report on “less lethal weapons” provided by the United Nations’ Office of the High Commissioner for Human Rights says police may use tear gas if some individuals in a demonstration are acting violently, but that this should be used as a last resort to disperse a crowd and take consideration of bystanders.

However, Michael Crowley at Bradford University and medical experts including Rohini Jaar, a faculty member at the Berkeley’s School of Public Health, say governments can and do misuse less-lethal tear gas and anti-riot equipment to quell protests, suggesting the risk to a company’s reputation from selling crowd-control gear should rank more highly on sustainable investors’ agendas.

Researchers noted tear gas had been designated as a chemical irritant and not a weapon by the Organization of Prohibition of Chemical Weapons, even though the Geneva Convention bans its use in wartime.

A review of 31 studies published in BMC Public Health of tear gas and other chemical irritants used for crowd control, found 8.7% of the more than 9,000 injuries documented were considered severe and required medical management, with that number jumping to 27% if the victim was hit directly by the canister.

Tear gas is less harmful if wielded in line with protocol, that is, in an open environment that allows for its swift dissipation, said Sven Eric Jordt, a toxicologist at Duke University, one of the few academics who has conducted studies on how the chemical triggers pain. But well-trained police have been found to often flout guidelines by firing tear gas in enclosed spaces and aiming the canisters directly at targeted individuals, circumstances which can lead to death, he added.

Patrick Wilcken, arms-control researcher at Amnesty International, says Safariland should monitor how their products can be abused by police, and cease sales if they find they cannot mitigate the human rights risks.

“By extension, responsible investors should be assessing and monitoring human rights risks associated with their financial support and not entering into partnerships where these risks cannot be prevented or mitigated,” he said in emailed comments.

In response to an op-ed penned by Brown University’s student newspaper in Feb. 2018, Kanders said “ultimate responsibility” lies with those who made use of Safariland’s products.

“Investors are coming at ESG from a place of values and ethics. Is there a mismatch?” said Leslie Samuelrich, president of Green Century Funds.

She said that some investment managers aren’t being genuine in their ESG stance but are eager to draw investors who are eager to allocate funds to more socially beneficial funds.

“It points to a growing problem where firms are saying we use ESG in part of what we do, then they put the whole banner of sustainability over that firm,” said Samuelrich, adding that this approach wasn’t “authentic.”

But even some ESG investors don’t necessarily view divestment or avoiding such investments altogether as the best way of effecting social change, and that sometimes keeping a financial stake in controversial companies can help investors to advocate for change from within.

“If I divest, I won’t have a seat on the table. We don’t know what policy might be more effective. Thoughts about the benefits of engagement are very much recent developments within ESG,” said Ioannis Ioannou, a professor at the London Business School.