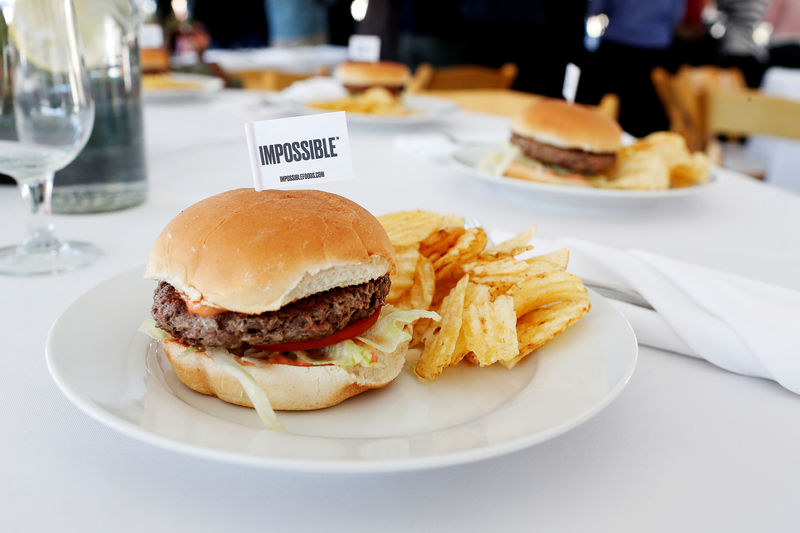 By Joshua Franklin and Anirban Sen

(Reuters) – Impossible Foods Inc, maker of the plant-based Impossible Burger, is in talks with investors about a new round of fundraising that could more than double the $2 billion valuation it attained in May, according to people familiar with the matter.

The Redwood City, California-based company is seeking to capitalize on growing consumer demand for meat alternatives. Rival Beyond Meat Inc (O:) has seen the value of its shares more than triple since going public in May, and is now worth around $4.8 billion.

Impossible Foods, aiming for a valuation of between $3 billion and $5 billion in the fundraising round, is looking to raise between $300 million and $400 million, the sources said. They cautioned that plans may change based on investor feedback.

Some existing Impossible Foods investors have been pushing for a larger raise at a higher valuation, one of the sources said.

The fundraising could set the stage for an initial public offering (IPO) for Impossible Foods as early as next year, according to the sources, who requested anonymity because the matter is confidential.

“We need to consider every option for fueling our long-term growth. However, we have not announced any plans or timing regarding an IPO,” an Impossible Foods spokeswoman said, declining to comment on any potential fundraising plans.

A big increase in the company’s valuation would indicate venture capital investors remain willing to bankroll big valuations in private fundraisings, despite the struggles of several high-profile startups in 2019.

Companies such as ride-hailing firms Uber Technologies (N:) and Lyft Inc (O:) have been unable to replicate high valuations attained in fundraising rounds in the stock market.

Office-sharing company WeWork was valued at as much as $47 billion in private fundraising rounds, but was considering going public at a valuation of as low as $10 billion before postponing its IPO in September.

Impossible Foods, whose backers include venture capital investors Khosla Ventures and Horizons Ventures, as well as celebrities like tennis star Serena Williams (NYSE:) and singer Katy Perry, has so far raised $777 million in the private market, according to data provider PitchBook.

Impossible Foods says its burgers are sold at more than 15,000 restaurants around the world. It also recently started selling its products at certain U.S. grocery stores.

The global meat substitutes market generated revenue of $4.2 billion in 2018, and is expected to be worth $6.1 billion by 2023, as more consumers convert to veganism or cut down on consumption of red meat, according to a report by Research on Global Markets.

Despite breakneck growth, some analysts have raised questions about whether the plant-based meat market has been overhyped. Beyond Meat shares, while still well above their IPO price from May, have pared gains to trade at less than half their all-time high.