Home
Stocks
FA Center: Here’s why those billionaires could be wrong about a Warren presidency tanking stocks
Prev Article Next Article

It’s impossible to know, but it is possible to take an objective look at the question. That’s because of the insight gained from analyzing trading data from online gambling sites, such as PredictIt.org, which allow investors to bet on various outcomes. By comparing changes in the Warren presidency contract with the price changes of various sectors in Warren’s crosshairs — such as big-tech, health insurance, banks, and energy — we can determine the likely market impact if Warren is elected president in 2020.

I conducted just such an analysis for this column. I followed methodology introduced in a study nearly 20 years ago by Eric Zitzewitz, now an economics professor at Dartmouth College, and Justin Wolfers, now a professor of economics and public policy at the University of Michigan.

I first fed into my PC’s statistical package daily prices for the PredictIt.org contract related to Elizabeth Warren becoming President (back to Jan. 11, when it first began trading). It is a so-called all-or-nothing contract, since it pays $1 if she is elected and zero if not. As a result, its price at any given time represents investors’ collective belief on the odds she will become president. It recently traded at 14 cents, implying a 14% probability of that eventuality. Since January, this contrast has traded as high as 37 cents and as low as 2 cents.

I then also fed into my software daily prices for Facebook FB, +0.45%  stock as well as the Select Sector SPDRs benchmarked to the financial, health care, energy, and industrials sectors. I also included the price history for the S&P 500 SPX, +0.22%  . I then searched for correlations between the Warren contract and any of these other price histories.

To illustrate the complex statistics required to detect any pattern, consider that on Nov. 7, the Warren contract rose in price, to 20 cents from 19 cents. On that same day, Facebook stock fell by $1.13. These two data points suggest that a Warren presidency would in fact be negative for Facebook stock, since improved Warren odds correlated with a lower Facebook price.

Yet on Oct. 24, both the Warren contract and Facebook simultaneously gained in price — by six cents and by 23 cents, respectively. Those data points suggest that a Warren presidency wouldn’t have such a negative impact on Facebook stock, after all, and might even be positive.

Read: This is what the net worth of the world’s elite would look like if Elizabeth Warren’s tax plan had been in effect since 1982

To search for any possible overall pattern, the software looked at all daily price changes back to January. It also looked at weekly changes. My statistical software could not detect any pattern at standard levels of statistical significance. Nor did any significant patterns emerge for any of the stock market sectors I analyzed, or for the S&P 500 itself. 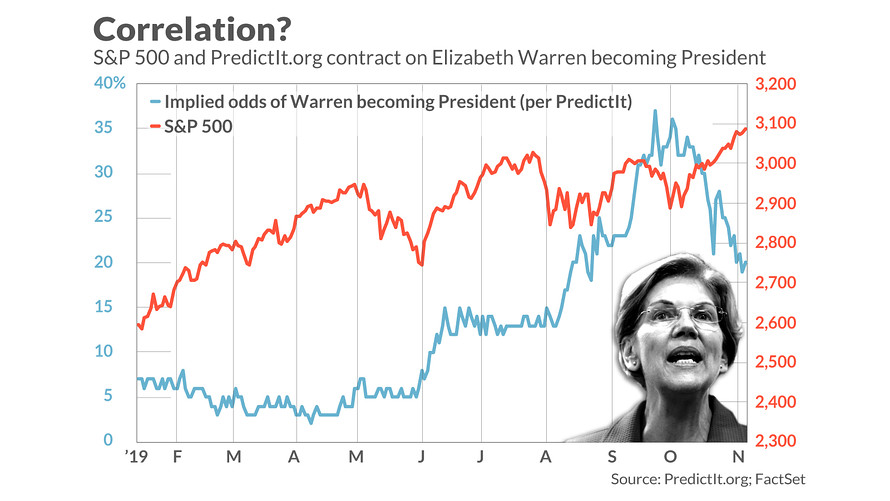 Maybe my PC’s statistical software is missing something. For insight, I turned to Zitzewitz, who explained that we simply don’t yet have enough data to measure the potential impact of a Warren presidency — despite the dire predictions from some captains of industry. A related difficulty with drawing any conclusions, he said, is that “we haven’t had an event that has moved Warren’s probability without also affecting lots of other things.”

He means, of course, that correlation isn’t causation. What might have a big impact on Warren’s odds of winning that doesn’t affect lots of other things? Zitzewitz wasn’t sure. “Sometimes that’s too tall an order, since many political events have multiple impacts,” he wrote in an email. “Perhaps Iowa or New Hampshire [primaries] will give us an event like that.”

Meantime, you might be justified in arguing that a Warren presidency would impact the overall stock market or certain sectors — positively or negatively. But your argument says more about your politics than about what the market itself says is likely to happen.