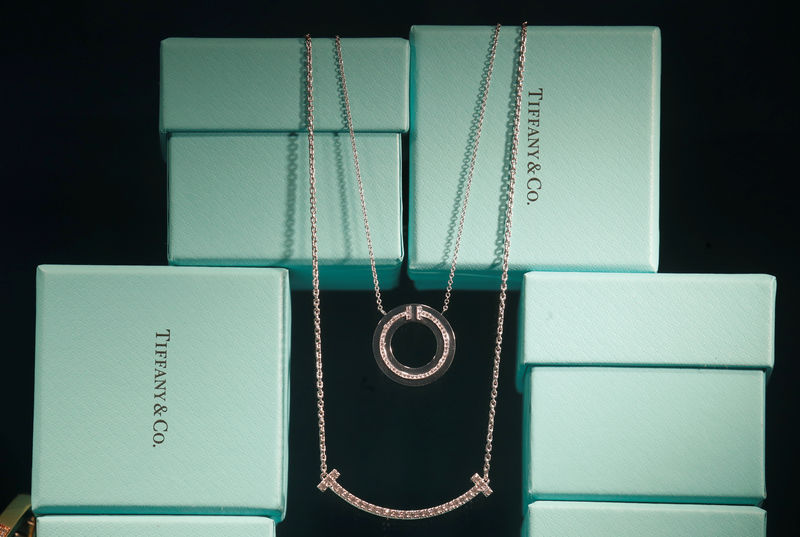 © Reuters. Tiffany & Co. jewelry is displayed in a store in Paris

LONDON/PARIS (Reuters) – Tiffany was codenamed “Tea” and LVMH was “Latte” in the whirlwind talks that led to the U.S. jeweler being taken over by the French luxury group for more than $16 billion, in a homage to famed film “Breakfast at Tiffany’s”.

The monikers were an attempt to ensure secrecy about a deal that LVMH wanted to seal swiftly before its competitors could intervene, according to two sources involved in the talks.

LVMH’s bid approach was discussed by executives at the two companies in mid October, soon before the French firm launched a big factory in Johnson County, Texas, with U.S. President Donald Trump cutting the ribbon at the opening ceremony.

On Oct. 15, LVMH (PA:) executives had flown to New York, seeking to negotiate an agreement before Tiffany (N:) reported its next results in December, one of the sources said.

The urgency was driven by the fact that the Hong Kong protests and the U.S.-China trade war were expected to hit Tiffany’s results and drive down its share price, potentially luring industry rivals looking to exploit its weakness, said the source.

“It was important for LVMH to be the first-mover because, when you are the world number one, it is difficult for rivals to launch a bidding war,” he said.

The swoop was orchestrated by a trio of Italian businessmen, including LVMH managing director Antonio Belloni and Tiffany CEO Alessandro Bogliolo, who played a key role in LVMH’s 2011 acquisition of Italian jeweler Bulgari – the French group’s first foray into high-end jewelry.

LVMH’s billionaire boss Bernard Arnault, a renowned dealmaker, was himself focused on ensuring he was getting control of Tiffany’s most valuable assets: all the patented elements that came with the Tiffany brand, notably its robin’s egg blue boxes, the sources said.

“Bernard Arnault spent lots of time checking all the IPs and protections on the blue box. The most famous Tiffany product is actually its packaging, the color, the form, the white satin ribbon, all of this is protected,” said one of the sources close to LVMH.

Arnault nodded to this in a Reuters interview on Monday following the announcement of the deal.

LVMH is one of France’s most famous companies and its marquee brand Louis Vuitton is First Lady Brigitte Macron’s designer of choice, but its takeover of American giant Tiffany was essentially an Italian job.

For this deal, Arnault relied on the close-knit connections that his right-hand man Belloni had forged with Tiffany’s CEO Bogliolo and board member Francesco Trapani back in 2011 when the pair worked at Bulgari, the sources said.

Their established relationship helped move the deal along swiftly and gave LVMH an advantage in its approach to Tiffany that few rivals could have emulated, they added.

Belloni, 65, met Tiffany’s Bogliolo and Trapani almost a decade ago when he was leading LVMH’s 3.7 billion euro ($4.1 billion) acquisition of Bulgari.

Trapani, 62, was the boss of Bulgari at the time, a company he led for 28 years. He joined LVMH in 2012 to oversee Bulgari’s integration and then run LVMH’s watches and jewelry division, a job he quit in 2014.

Bogliolo, 54, was a senior executive at the Italian firm, reporting to Trapani.

It was Rome-born Trapani who set in train the process that culminated with Tiffany’s takeover. After amassing shares in the jeweler and backing an activist campaign, he ousted Tiffany’s then-CEO in 2017 and offered the top job to Bogliolo.

Bogliolo’s subsequent struggles to turn around Tiffany amid a slowdown in luxury spending were closely monitored by Belloni who proposed a mid-October meeting to discuss a tie-up, according to the sources.

Belloni tapped a senior Italian banker at Citi, Luigi De Vecchi, to handle the talks, hoping to reach an agreement by the Thanksgiving celebrations on Nov. 28, said one of the sources who is close to LVMH.

De Vecchi was familiar with all the parties involved having worked on the Bulgari deal while he was at Credit Suisse (SIX:).

LVMH did not involve any French banks to negotiate its biggest-ever deal, with advisers in Paris pointing to Belloni’s long-standing relationship with De Vecchi as the main reason.

In the end, it took just over a month and three revised bids to get the Italian job done.