Home
Stocks
Market Extra: Why stock-market investors should fear a 2020 election ‘sweep’ most of all
Prev Article Next Article

Investors worried about how the stock market will react to next year’s federal elections shouldn’t take their cue from the presidential horse race alone.

Odds of either happening appear small at present. But if that were to change equity markets could sell off before voters go to the polls, he said.

That’s because “fear of such a unified government outcome on Election Day 2020 is substantial at the same time that confidence, so very important to markets and economies, remains fragile albeit stabilizing,” Emanuel said in a Sunday note. Survey data and other indicators show chief executives remain wary of the futures and hesitant about planning, particularly with regard to capital spending, as the trade wars have taken “both a psychological and a real toll on businesses,” he said.

Meanwhile, analysts at Goldman Sachs, in a Monday note detailing their 2020 U.S. equity outlook, warned that political maxims “such as ‘United we stand, divided we fall’ do not necessarily hold in investing.”

“In the United States, equity returns during periods of divided federal government have typically exceeded returns achieved when one political party controls the White House, Senate, and House of Representatives,” they wrote. “Since 1928, excluding recessions, when the federal government was controlled by a single party, the S&P 500 median 12-month return equaled 9%. However, the median return under a divided government was 12%.”

Goldman Sachs said it expects the bull market in U.S. equities to continue in 2020, with a durable profit cycle and continued economic growth set to lift the S&P 500 by around 5% to 3,250 in early 2020. But rising “political and policy uncertainty” will keep the index rangebound for most of 2020, they said.

Having noted that several Democratic candidates have called for rolling back the 2017 tax cuts, the Goldman analysts said a unified federal government could prompt investors to assume a reversal of the tax cut and lower projected 2021 S&P 500 earnings per share to $162, a 7% year over year decline — compressing the price-to-earnings multiple to 16, which would be consistent with an S&P 500 level of 2,600.

Tim Moe, Goldman’s chief Asia-Pacific equity analyst, in a Bloomberg interview, spelled it out more directly, warning that the prospect of a rollback of the 2017 corporate tax cut by a unified Democratic government could spark “possibly even up to a 20% correction on the S&P.”

Read: One of the biggest risks facing stocks, according to Goldman: Democrats

Emanuel used the chart below shows that the S&P 500 SPX, +0.60%  has suffered an average return of negative 5.9% in eight election years since 1932 that saw a transition from a divided to a unified government. Stocks have fallen five out of those eight years versus turning in a positive performance in nearly two-thirds of all years. 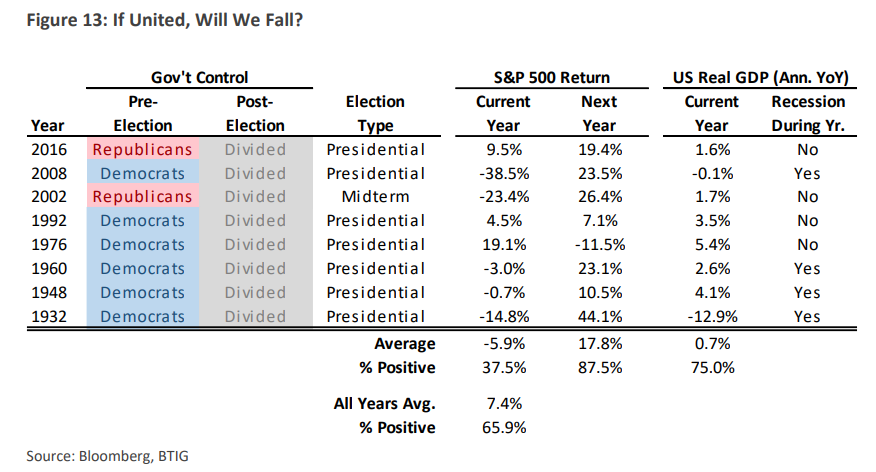 The table also shows that the year after a transition tends to be positive, with stocks rising 87.5% of the time for an average return of 17.8%. But such knowledge “is cold comfort to investors confronted with the present political chaos in the U.S.,” Emanuel wrote.

While investors may be nervous, stocks have been climbing the so-called wall of worry. The S&P 500 and Nasdaq Composite COMP, +1.18%  both edged to all-time highs Monday, while the Dow Jones Industrial Average DJIA, +0.47%  was within striking distance of record territory. The S&P 500 is up nearly 25% in the year to date, with recent support tied to upbeat if not perhaps fragile expectations around prospects for a so-called phase one trade agreement between the U.S. and China.