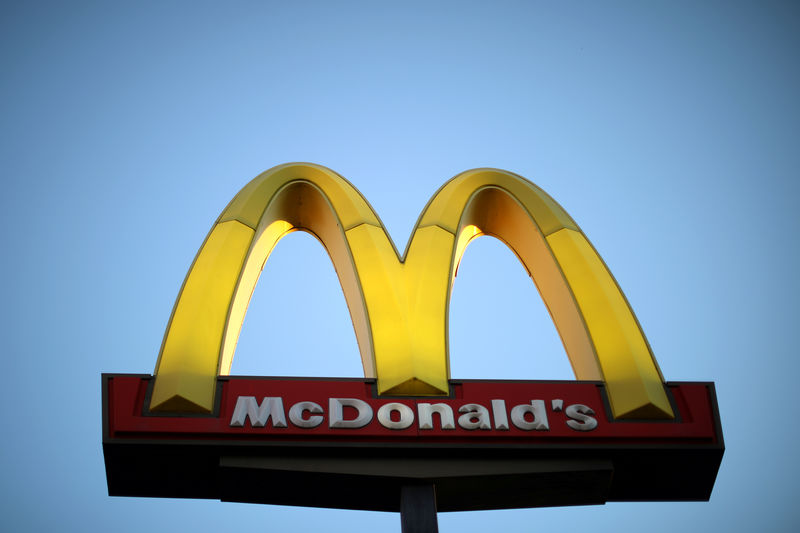 © Reuters. FILE PHOTO: The logo of a McDonald’s Corp restaurant is seen in Los Angeles

The preliminary settlement resolves claims that the company used a timekeeping system that cheated workers out of overtime, barred workers from taking rest breaks during their shifts, and forced workers to clean and iron their uniforms out of pocket.

It resolves claims by about 38,000 cashiers and cooks in California, and is the largest wage settlement against Chicago-based McDonald’s in the United States, representatives for the plaintiffs said.

The accord requires McDonald’s to pay required overtime, track pay electronically, provide rest breaks during rather than at the start or end of shifts, and provide replacement work uniforms when old uniforms become damaged or worn out.

McDonald’s denied wrongdoing as part of the settlement. The accord requires court approval.

In a statement, McDonald’s said it still believes its employment practices complied with California labor law. It also said it is improving training at company-owned restaurants “to promote continued compliance with all wage and hour laws.”

McDonald’s has long been a target of labor organizers who claim it underpays workers and provides unsafe working conditions at company-owned and franchised restaurants.

On Nov. 12, the American Civil Liberties Union and workers in Michigan sued McDonald’s for allegedly allowing sexual harassment to flourish at its restaurants.

Then on Nov. 21, a group of Chicago-area workers sued McDonald’s and several franchisees over a recent restaurant redesign that they said left them vulnerable to physical attacks by angry customers.

Lawyers for the California workers may seek fees of up to one-third of the settlement amount, according to court papers.

McDonald’s has roughly 14,000 U.S. restaurants, of which approximately 95% are franchised. It has more than 38,000 restaurants worldwide.