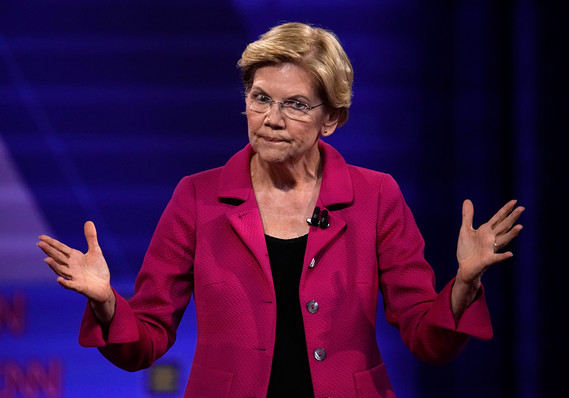 Inequality has become an obsession among global elites and in America, the left charges President Donald Trump’s economic policies exacerbate the problem.

Warren’s ultra-millionaires tax would impose a 2% levy on individual fortunes over $50 million and 3% on those over $1 billion to raise, she says, about $2.75 trillion over 10 years. In her Medicare for All plan, she even floated a 6% levy for billionaires.

All of this is problematic in its premise and execution.

Over the last half decade, low-wage workers — mostly those in restaurant, retailing and the like — have seen their wage growth considerably outpace middle- and high-wage industries.

Working-class men sidelined by the Great Recession, now attracted by higher wages, are re-entering the labor force. The real inequality problem appears concentrated in the middle class — too many college degrees have not added value as specialized professionals and technicians are more in demand than generalists.

About three-quarters of household wealth may be in liquid assets like stocks and bonds but their value fluctuates. If equities were up 20% in 2021, and the IRS took $1 million from a taxpayer owning $50 billion, would it give back the money if the market fell 20% the next year? Likely not.

Larry Summers — hardly an advocate for conservative causes — notes history indicates every 1 percentage point increase in income-tax rates produces a 0.6 percentage point decrease in taxable income. That implies Warren’s ultra millionaires tax would harvest only $1 trillion—broadly in line with the analyses of other liberal and conservative economists.

$100 billion a year is not much gain for the headaches of annually evaluating the value of nonliquid assets like patents and family-held businesses, which the IRS already finds maddening for estate tax purposes. Doubling the rate to 6% would increase tax avoidance further and hardly generate $200 billion, which is dwarfed by the price tag for Warren’s proposals.

For those reasons and the disincentives to risk taking and investment, most of the dozen Western European nations with wealth taxes in the early 1990s have dropped those.

Student-debt relief makes a lot of sense. About half of college freshmen have been hoodwinked by slick for-profit schools and brand-name universities into programs they either can’t complete or that lead to jobs with salaries inadequate to pay off loans.

We are overinvesting in higher education and not spending enough on sound vocational training. Simply canceling debt and further subsidizing tuition won’t correct this error.

Similarly, the Davis-Bacon Act effectively requires most work on federal-funded infrastructure projects be performed at union wages and work rules. Those raise costs and are a blatant example of special-interest politics — unions only represent 6.4% of private-sector workers.

Most growth stories of the last generation were financed by wealthy private investors. Google GOOG, -0.46%  , Apple AAPL, -0.09%   and Microsoft MSFT, +0.07%  were boosted to flying speed with the fortunes Warren wants to tax.

Still, the rise in wealth and income inequality is likely transitory. The big tech companies Facebook FB, +0.45%   Apple , Amazon AMZN, +0.63%  , Google, and Netflix NFLX, -0.39%  are increasingly up against limits in their core markets and will face tough antitrust scrutiny expanding into other lines.

Many of the new unicorns coming along are novel ideas but hardly path-breaking high tech. UBER, +0.34%  is just a more efficient method for dispatching taxis and WeWork an office leasing company. Neither is profitable.

An American Institute for Economic Research study found that the share of income going to the 10% of earners has hardly varied from its average over the last century by more than 5 percentage points. Research published by Bloomberg demonstrates that the recent economic recovery has most benefited working-class employees and workers’ share of gross domestic product is rising again.

Fairness, like capitalism, has its cycles because the forces limiting workers’ leverage rise and fall as disruptive phenomenon appear and then dissipate. Growth and low unemployment appear to be the best antidote for rising inequality.