Home
Stocks
Rex Nutting: How to talk about the economy to your Trump-supporting uncle at Thanksgiving
Prev Article Next Article 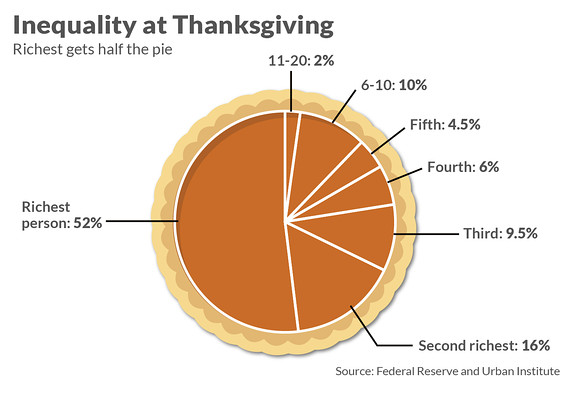 If Thanksgiving dinner were distributed the way that wealth is in America, one person would get half of the meal, while half the guests would a sliver to share.

If your Trump-supporting uncle corners you at Thanksgiving dinner and starts talking about how the U.S. economy is best it’s ever been, what should you do?

If you’re feeling generous (as you should on Thanksgiving), you’ll politely change the subject. You won’t change his mind, nor he yours. You could talk about football, or flowers, or the hideous dress your niece is wearing. Anything but politics. Or economics, which is the same thing.

If you’re feeling a little pugnacious, you should tell him that the economy is on (more or less) the same trajectory it was on when President Donald Trump was inaugurated nearly three years ago, with decent growth in output, jobs, and incomes.

You might print out and hand your uncle this column I wrote recently that goes through the data that proves that the economy is no better than it was before.

The normal state of the economy is modest growth, which is what we’ve had. Trump deserves some credit for helping the economy to keep chugging along, but he hasn’t transformed it as he promised he would. Or as Trump and your uncle claim he did.

But if you want to teach him something, why not take the opportunity to turn Thanksgiving dinner into a discussion of a topic that many Trump supporters agree is a big problem: How the system is stacked against regular folk like the ones who are gathered around your holiday table.

You could talk about how all of us work hard, but most of the bounty we produce ends up in the hands of a very few.

Imagine for a minute that you are standing at the head of the table, about to carve the turkey. Nineteen of your relatives are watching with hungry eyes and drooling lips as you slice down the breast bone and take half of the turkey and plop it on your plate.

That’s your fair share, according to our economic system. One-twentieth of the people has half of the wealth.

Your relatives object loudly: “Why do you get half? We grew the veggies, raised the turkey, cooked the meal, baked the pies, and set the table! You didn’t do a thing except go upstairs to talk to your broker!”

“And most of all because I came up with the slogan: ‘Prime Free One-Day Delivery.’”

Be thankful I don’t take it all

You tell them not to worry so much. There’s still half of an extra-plump turkey left on the platter!

So you carve off the remaining breast and put it on your brother’s plate. He manages your farms, your factories, and your free one-day delivery. “He gets one-sixth of the bird as the second richest person at the table,” you say.

Then you put the remaining thigh on your aunt’s plate, the drumstick on grandpa’s plate, and the wing on your cousin’s. And so on, as you cut off the remaining meat and parcel out ever-smaller morsels around the table.

Most of what’s edible is gone after you’ve served just half the crowd.

Over at the other table, the other 10 relatives will have to share a few bites: A little skin here, a little meat there, some gristle, and some fat. And your uncle gets to gnaw on the wishbone while you put three-quarters of what was on your plate into Tupperware for a late-night snack.

That’s what Thanksgiving dinner would be like if it were played by the rules of capitalism.

Ask your uncle if it seems to fair to him that you got half the turkey and he got the gristle. Or maybe he’d prefer the socialist way that most families approach Thanksgiving: Everybody eats, or no one does.