Home
Stocks
Semiconductor stocks are bubbly, as companies’ sales are worse than most investors think
Prev Article Next Article

U.S. corporate earnings have been declining yet quarterly “beats” are celebrated and being duly rewarded.

As companies continue to clear low hurdles, stocks and their related ETFs are sent soaring. Nowhere is this more evident than in the semiconductor sector. This is especially troublesome when company management in large part is forecasting another flat to negative year across the board.

There are outliers, but the materials sector as a whole is reporting a 19% decline in earnings, while the iShares PHLX Semiconductor ETF SOXX, +2.21%  is up 45% this year. According to Philip van Doorn, 12 of 30 semiconductor companies are expected to return to growth next year, up from three this year. However, he provided 12-month price targets on Oct. 8, and semiconductors have already blown past those targets since the analysis was published, leaving little room for upside.

Keep in mind that most of the double-digit sales growth expected next year will be regaining lost ground to get back to 2017 levels — before the U.S. trade conflict with China. Meanwhile, because of flat earnings, the stocks are much more expensive than they were in December.

Digging a little further, sales of $19.19 billion were up slightly from $19.16 billion a year earlier — essentially flat — while the company’s gross margin narrowed to 58.9% from 64.5%. The stock is currently trading near a 52-week high.

With that said, Intel’s buybacks are impressive, with a $20 billion increase in its stock-repurchase program. In the third quarter alone, the company used $4.5 billion to repurchase 92 million shares.

The other side to buybacks for tech leaders is they risk losing ground. In April, Intel lost a battle to Qualcomm QCOM, +0.71%  in 5G chips. Many investors are also aware Advanced Micro Devices AMD, +2.19% is nipping at Intel’s heels for the CPU-powered cloud-data center. Silicon Valley is now throwing its hat into the ring with startups such as Nuvia, a team of chip designers who received $53 million in funding to take on Intel and AMD.

Buybacks for tech companies in a highly competitive space is a backward approach, as the money should be spent on innovation. Intel is at a critical junction for macro trends, such as the 5G ramp-up and cloud-data-center push, and should be spending to maintain its lead. During the company’s earnings call, CEO Bob Swan said the world had become more competitive and “[Intel] is going to compete to protect our position and expand the role we play” — most likely referring to AMD.

Intel’s $4.5 billion in share buybacks last quarter were higher than the company’s $3.2 billion in R&D spending, proving the company is competing to meet consensus earnings estimates rather than to increase market share.

AMD is a promising company that executes well against gorilla-sized competitors, with annual revenue of $6.5 billion compared with Intel’s roughly $70 billion.

In July, the company lowered its guidance, which it met for the third quarter. The market is rewarding AMD for regaining lost ground, but the response is teetering on exuberance. The stock is up 124% this year, for the best performance among the S&P 500 SPX, +0.61%. If the company meets guidance, its annual sales will total $6.7 billion, up from $6.48 billion last year.

AMD’s earnings reflect very strong growth quarter-over-quarter. AMD is a growth stock with a forward price-to-earnings (P/E) ratio of 67 and current P/E ratio of 200. The company is posting low-single-digit revenue growth year-over-year and 18% revenue growth quarter-over-quarter. In October, AMD had a 12-month price target of $32.94 based on a 25% expected sales increase in 2020. The company has blown past this target in six weeks off 4% growth this year, and is trading near $40 per share.

Investors should fully expect AMD to return to customary growth levels at some point, but if investors are already paying 67 times earnings for the stock, there is little room for the valuation to reflect the growth. Eerily enough, AMD’s forward P/E ratio is the same as it was before the stock’s market capitalization was cut in half during the selloff in the fourth quarter of 2018. Perhaps more precarious, AMD is also priced where it was before the dot-com bust. 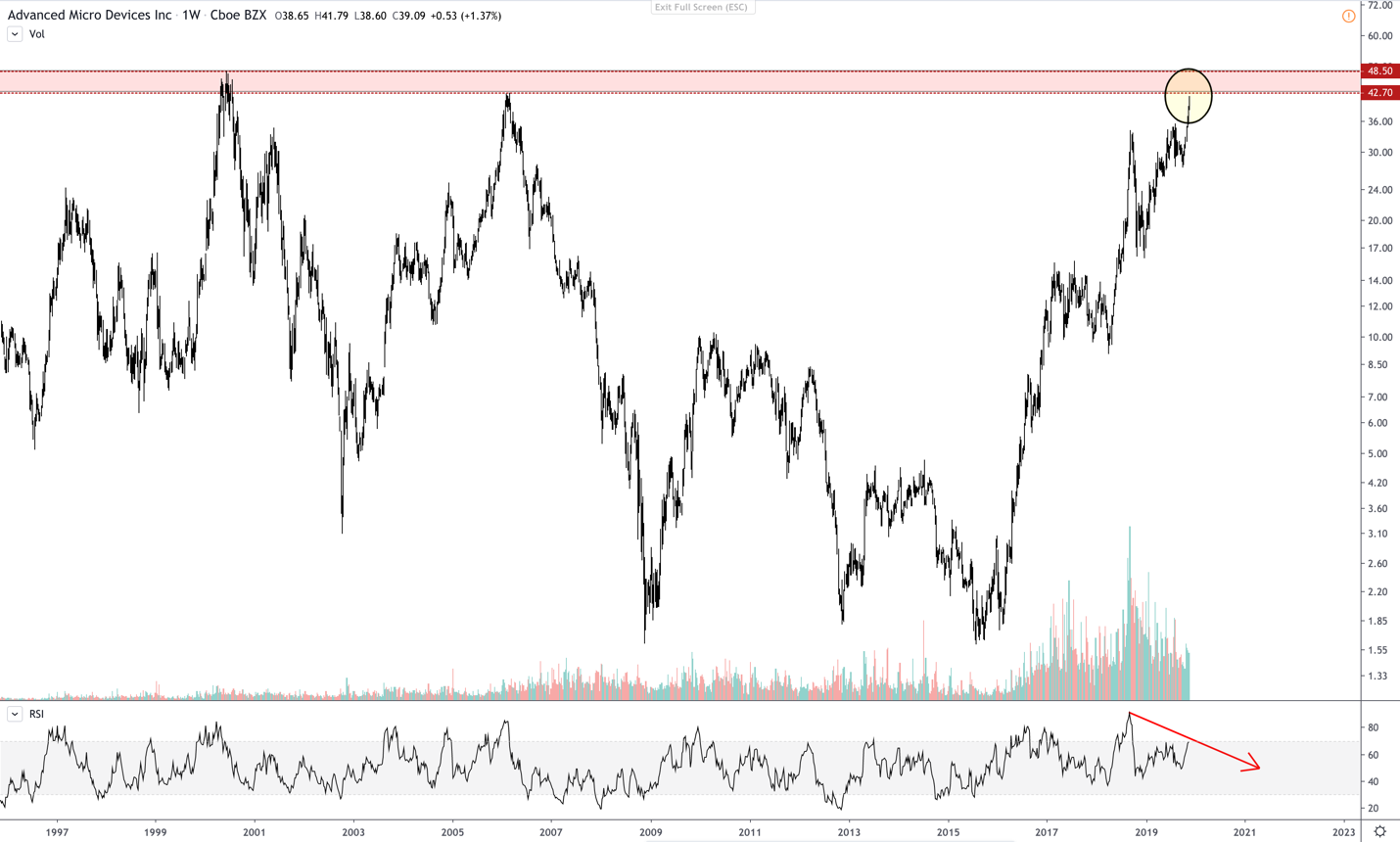 In the chart above, we see AMD’s price today at the same levels it was before the dot-com bust and 2008 crash.

KLA reported sales growth of 30% year-over-year and 12% quarter-over-quarter for its fiscal first quarter ended Sept. 30. The company supplies process-control and yield-management systems for the semiconductor industry. Yet again, the company has blown past the 12-month consensus price target, making future gains more difficult to achieve.

Lam Research, a supplier of water-fabrication equipment for the semiconductor industry, proved that revenue growth is out of fashion while buybacks are driving prices in the current market. The company is guiding to a 10% decline in sales this year, with expected 5% growth next year.

In addition to the flat earnings reported this quarter and flat earnings guidance for next quarter, there were a few semiconductor companies that missed earnings estimates while blaming the trade war. Texas Instruments TXN, +1.68%  reported an 11% year-over-year decline in third-quarter sales, while lowering its fourth-quarter sales guidance to a range of $3.07 billion to $3.3 billion, from $3.6 billion. Xilinx XLNX, +0.67%  reported a 12% increase in sales for its second quarter from a year earlier, but a 2% sequential decline in sales.

A few months ago, cloud software stocks were considered to be in a valuation bubble. Now we see semiconductors taking the lead on gains and reaching record-high valuations. Chip makers do not report triple-digit revenue growth the way some cloud companies do. Then again, in contrast, semiconductor manufacturers are more mature and have positive margins and income.

The problem is that earnings growth is minimal for such high valuations, and many of the companies are caught in the middle of the trade tensions. While this risk should not hold investors back entirely, any near-term tremors will affect semiconductor valuations. Exuberant prices are fun for a bit, but sell-offs can be compounded when fear sets in.

Investors who were holding semiconductor stocks were given a pleasant surprise, one that few would have forecast a few months ago as the expected rebound in 2020 has become a premature resurgence. Meanwhile, those who are buying at these valuations are playing for high stakes — stock valuations in this industry have historically not lasted long at these levels.

Disclosure: The writer has no holdings in any securities mentioned in this column.

Beth Kindig is a San Francisco-based technology analyst with more than a decade of experience in analyzing private and public technology companies. Kindig publishes a free newsletter on tech stocks at Beth.Technology and runs a premium research service.