President Trump shared a photo of the Special Forces dog that became a national hero earlier this month, when it was revealed that a Belgian Malinois was injured while helping to chase down ISIS leader Abu Bakr al-Baghdadi, who died after detonating an explosive vest.

The dog’s name was originally kept classified, but Trump introduced the paw-some patriot live to the world on Monday afternoon.

“So this is Conan, right now probably the world’s most famous dog,” said Trump, adding, “I don’t think I have to use the world ‘probably.’” 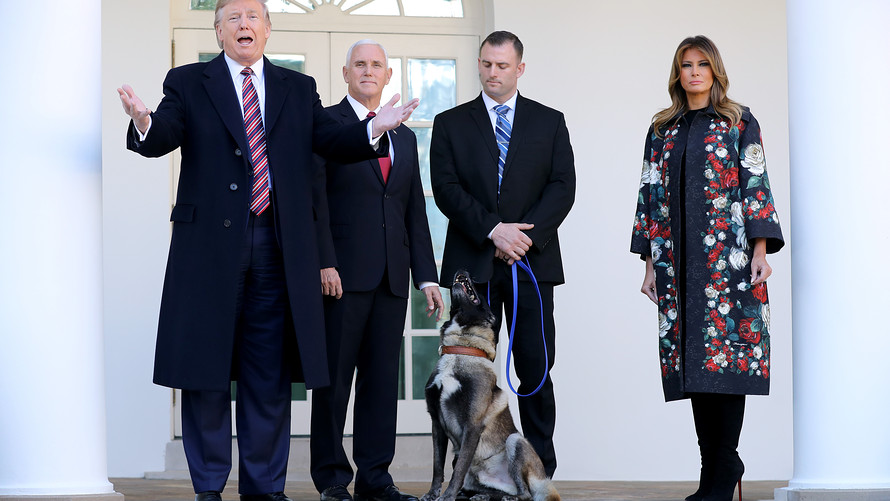 And although the president used the “he” pronoun once or twice in describing the four-legged war hero, a White House source confirmed to MarketWatch that Conan is actually female. And a White House correspondent issued the following correction to the press pool: “Your pooler retracts the earlier comment that Conan was a very good boy. Conan is apparently a very good girl. Good girl, Conan.”

The president gushed over the military working dog, who is reportedly the veteran of more than 50 missions, as “so brilliant, so smart.”

NEW: Pres. Trump says Conan, dog injured in raid that led to the death of ISIS leader al-Baghdadi, has been given a medal and a plaque. https://t.co/JsAo4rT8TM pic.twitter.com/yzaZDw4vza

Conan also received a medal and a plaque at the White House on Monday, as well as plenty of pats from Vice President Mike Pence during the presser.

“I actually think Conan actually knew what was going on,” said Trump. “This is a dog that is very, very special.”

Trump went on to praise Conan and her human handlers for a “flawless attack” on al-Baghdadi. “It’s an incredible story. I learned a lot about this particular type of dog,” Trump said, “and it’s trained that if you open your mouths, you will be attacked. You want to be very, very careful.”

Conan didn’t appear fazed by all of the attention on Monday, however. She wagged her tail as she was led out, and kept nuzzling Pence, or looking up with a doggy grin on her face.

Trump raved that Conan is “really strong, tough, fighter,” and a strong man (without a gun) would have “no chance” against her when she’s in full attack mode. “You’re very lucky he’s not in a bad move today, Jeff,” Trump said to the press pool, possibly referring to Reuters reporter Jeff Mason.

The Belgian Malinois breed is valued by the U.S. military for its ability to sniff out explosives, find people buried under rubble, locate enemy forces, and to guide and protect troops. They can cost anywhere from $1,500 for a show dog puppy to over $30,000 for a fully trained protection dog, the New York Times reported. And it has been increasingly hard for the U.S. military to find enough Belgian Malinois dogs to meet their needs, as many of the best dogs stay in Europe or go to customers who pay more premium prices, according to a recent American Veterinary Medical Association report.

Trump also noted that these dogs are “very hard to get, this particular dog” during the press conference.

“I love this dog,” Trump added.

And so does the internet, as Conan began trending almost immediately on Twitter.

me to my dog tonight:

“Conan kills terrorists! Wtf do you even do?”

But not everyone was totally smitten. When someone in the media pool asked First Lady Melania Trump whether she wanted to adopt Conan for son Barron, she simply responded “No!”

It was a wild day at 1600 Pennsylvania Avenue. The White House Christmas tree was delivered by horse-drawn carriage earlier in the day. And the White House turkeys, one of which will be officially pardoned by the president (and thus escape the Thanksgiving table) on Tuesday, also arrived at the Willard Hotel in the morning.

The Presidential Turkeys have arrived in DC! After their trek from North Carolina, the two birds are settled in at The @WillardHotel and are resting up for the ceremony on Tuesday.

Tune in tomorrow at 11 a.m. ET to learn their names and vote for which bird should be pardoned! pic.twitter.com/bSHd7gjwhM