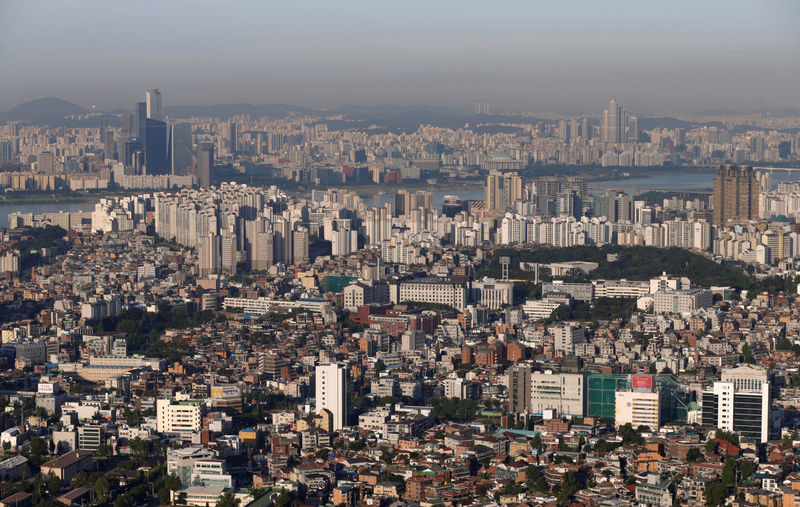 © Reuters. FILE PHOTO: The skyline of central Seoul is seen during sunrise in Seoul

SEOUL (Reuters) – The Seoul city government said on Tuesday that it has approved the long-delayed construction of Hyundai Motor Group’s new headquarters in the affluent district of Gangnam, which is set to be South Korea’s tallest skyscraper when completed in 2026.

The 569-meter building will break ground in the first half of 2020, Seoul city said in a statement.

The construction, originally scheduled to commence in 2016, was delayed partly due to security concerns raised by South Korea’s air force, which said the building would interfere with radar and military operations, a Seoul city official said.

Hyundai signed an agreement with the defense ministry to resolve operational restrictions until the construction of the building has reached around 260 meters high, the official said, adding that the construction can be suspended should Hyundai fail to do so.

The building, consisting of 105 floors, will house not only offices, but a car theme park, a hotel, a concert hall and a convention center, according to its 2014 plan. It will be home to 18,000 employees from 30 affiliates of the conglomerate, it said at the time.

Hyundai Motor said in March that it was in talks with potential investors to share additional investment costs worth about 3.7 trillion won needed to develop its new headquarters, following a call by U.S. hedge fund Elliott Management Corp to drop the controversial project.

Hyundai Motor is trying to rebound from its sixth consecutive annual profit declines, while accelerating its investments in future technologies.

Hyundai said it “will continue to work closely with the Seoul Metropolitan Government to proceed with the project in compliance with the administrative procedures.”