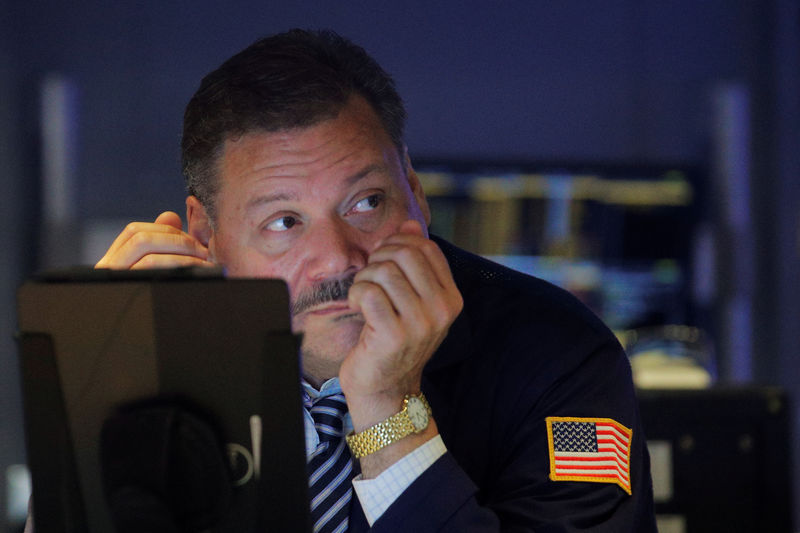 © Reuters. FILE PHOTO: Trader works on the floor at the NYSE in New York

By April Joyner and Lewis Krauskopf

NEW YORK (Reuters) – Wall Street stocks have leap-frogged over a host of concerns, including a stall in corporate earnings and political controversy in Washington, on their way to record highs this month.

Some market observers have attributed investors’ glass-half-full outlook to periodic inklings of progress toward a trade agreement between the United States and China. The , the and the Nasdaq all closed at records on Monday as China’s Global Times newspaper reported that Beijing and Washington were “moving closer to agreeing” on a “phase one” trade deal.

But other factors have helped U.S. equity investors look past risks such as the possibility of the first year-over-year decline in quarterly earnings since 2016 and disruptions from the impeachment inquiry on President Donald Trump’s dealings with Ukraine and the 2020 presidential election.

The prospect of renewed economic growth and favorable monetary policy have arguably played greater roles than trade optimism in fueling the rally in U.S. shares, some say.

“I’m under the strong belief that trade is a side show,” said Jonathan Golub, chief U.S. equity strategist at Credit Suisse (SIX:) in New York.

ECONOMIC INDICATORS ON THE UPSWING

Soft manufacturing data led to a drop in U.S. stocks over the summer, but certain measures suggest the sector is set for a rebound. IHS Markit’s widely followed U.S. manufacturing index has moved off its August lows.

The rate of change in the Conference Board’s Leading Economic Index, which is made up of 10 components, including manufacturers’ new orders and building permits, likewise points to the beginnings of a turnaround, Ryan Detrick, senior market strategist at LPL Financial in Charlotte, North Carolina, wrote in a recent blog post.

(For a graphic on ‘Economic indicators bottoming?’ click https://fingfx.thomsonreuters.com/gfx/mkt/12/9122/9034/Pasted%20Image.jpg)

The Fed’s 2018 regime of rate hikes fueled sharp equity declines last December. But this year brought a pause and then an about-face, with three rate cuts in July, September and October.

Last month, the Fed also said it would start buying some $60 billion a month in Treasury bills. It has characterized these purchases as distinct from quantitative easing, or QE, its bond purchases to keep interest rates near zero during and after the financial crisis a decade ago. But some analysts say they have similarly boosted financial markets.

“No matter what the Fed wants to call it, it is QE,” said Robert Phipps, director at Per Stirling Capital Management in Austin, Texas. “It’s quite supportive for equity prices going forward.”

With the steep climb in Treasury prices this year, the S&P 500 dividend yield has outpaced the benchmark . That has made stocks indispensable for investors in search of steady income from their holdings, even though earnings multiples for stocks are higher than their long-term average.

“We think this speaks to the relative attractiveness of equities,” John Linehan, a portfolio manager at T. Rowe Price, said at the firm’s global market outlook briefing last week. “The reality is for investors, given where fixed income is, there really are no real attractive alternatives to equities.”