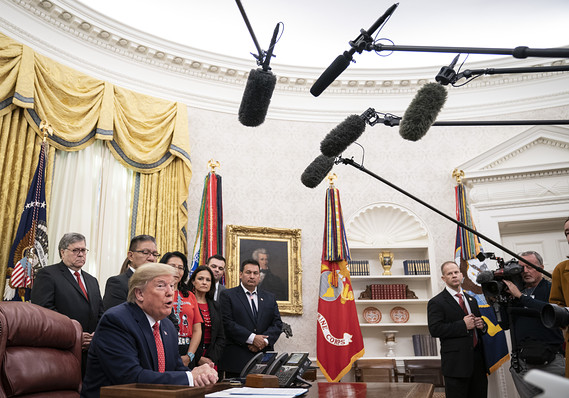 President Donald Trump speaks Tuesday during a signing ceremony for an executive order establishing the Task Force on Missing and Murdered American Indians and Alaska Natives.

President Donald Trump on Tuesday said the U.S. and China were nearing a trade deal, while at the same time offering support for Hong Kong after pro-democracy parties scored victories.

After top U.S. and Chinese officials agreed on talks toward a preliminary “phase one” agreement, Trump told reporters at the White House, “we’re in the final throes of a very important deal, I guess you could say one of the most important deals in trade ever.”

The president continued, according to Reuters: “It’s going very well but at the same time we want to see it go well in Hong Kong.” His comments came at a signing ceremony for an executive order addressing violence against Native American women.

Trump, meanwhile, hasn’t said if he’ll sign a bill in support of Hong Kong protesters that was passed by both chambers of Congress last week.

On Twitter, Trump said he’d “love” for senior administration officials to testify in the impeachment inquiry — but claimed they are being prevented from doing so in order to protect the presidency.

The president’s tweets came a day after a judge ruled that former White House counsel Don McGahn must testify before Congress. McGahn appealed on Tuesday.

“The D.C. Wolves and Fake News Media are reading far too much into people being forced by Courts to testify before Congress,” Trump tweeted. “I am fighting for future Presidents and the Office of the President. Other than that, I would actually like people to testify.”

The White House has argued that McGahn and other witnesses have “absolute immunity” from testifying.