Home
Breaking News
Bamboo Airways to take delivery of first Boeing Dreamliner this month
Prev Article Next Article
This post was originally published on this sitehttps://i-invdn-com.akamaized.net/trkd-images/LYNXMPEFB20RP_L.jpg 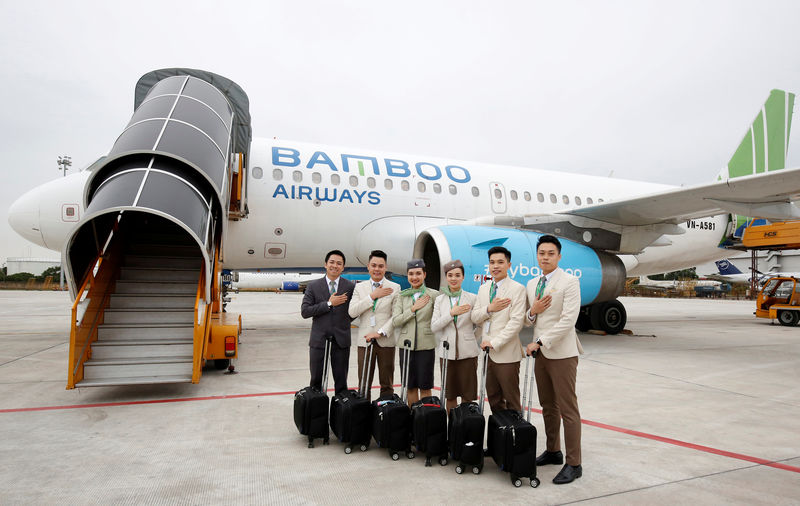 HANOI (Reuters) – Vietnamese startup Bamboo Airways said on Tuesday it will take delivery of a Boeing 787-9 Dreamliner (N:) this month, its first wide-body aircraft, and aims to start direct flights to the United States by early 2021.

“The new wide-body aircraft will enable us to launch our direct flights to the United States, in late 2020 or early 2021,” Thang told a press conference. The Dreamliner is due to be delivered on Dec. 22, he said.

The airline, owned by property and leisure company FLC Group (HM:), began flying in January. It aims to expand its fleet to 30 by the end of the first quarter of 2020, Thang said, a mix of Airbus (PA:) and Boeing planes including four Dreamliners under deals previously announced.

Bamboo now flies to major cities in Vietnam and destinations in Taiwan and South Korea, and Thang said it will add more international destinations next year, including Australia, Czech Republic and Germany.

Bamboo, which earlier this year signed deals to buy 30 Boeing 787 Dreamliners worth $5.6 billion, aims to expand its fleet to between 40 and 50 including leased planes by the end of 2020 and 100 by 2025, Truong Phuong Thanh, deputy chief executive, told the same press conference.

Bamboo said in September it will launch an initial public offering next year to raise around $100 million for its expansion plans.

“We will carefully select investors from Japan, the United States and Europe for the IPO,” Thang said on Tuesday.