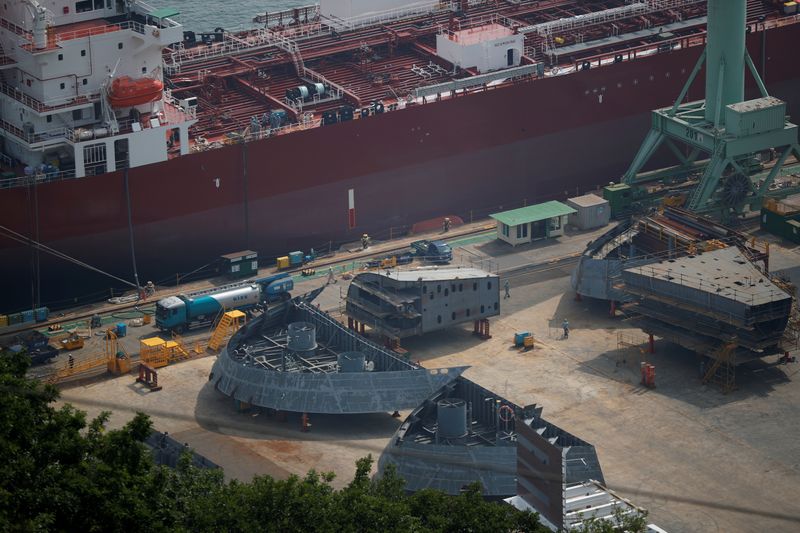 © Reuters. FILE PHOTO: Parts of the structure of a ship are seen at Hyundai Heavy Industries’ Shipyar in Ulsan

Hyundai is seeking to reinforce its position as the world’s biggest shipbuilder partly in response to overcapacity in the industry. The merged company would have a 21% market share,

The European Commission said it had serious concerns about the deal, confirming a Reuters story on Dec. 9.

“Cargo shipbuilding is an important industry for the European Union,” Margrethe Vestager, vice president of the European Commission, said in a statement.

Much of the EU’s internal and extend freight trade went by sea and European shipping companies regularly purchased vessels from Hyundai and Daewoo.

“This is why we will carefully assess whether the proposed transaction would negatively affect competition in the construction of cargo ships, to the detriment of European consumers,” Vestager said.

The Commission will decide by May 7 whether to clear or block the deal. The shipbuilders will likely have to offer concessions to address the concerns.

It said its concerns centered on the markets for large container ships and carriers of oil, liquefied and liquefied petroleum gas, markets with high barriers to entry where competition could be reduced.

However, to forestall regulatory worries, the shipyards have already said they will compete independently after merging, with each company able to negotiate their own contracts with customers and suppliers.

They also want the EU to take into account the competitive threat from the merged China Shipbuilding Industry Corp (CSIC) and China State Shipbuilding Corp Ltd, other sources said previously, an entity with sales more than three times its own.

Competition regulators in South Korea, Singapore, China and Japan are also reviewing the deal, which has been approved in Kazakhstan. Singapore earlier this month voiced its concerns.