Home
Stocks
Need to Know: Why it may be too late to chase defense stocks as Iran strikes U.S. bases
Prev Article Next Article
This post was originally published on this site

Traders certainly have shown no reticence to profiteer from U.S.-Iranian tensions.

Since December 27, when a rocket attack killed an American contractor in Iraq, the aerospace and defense sector has been the best performing S&P 500 industry group, according to analysts at research service Bespoke Investment Group. 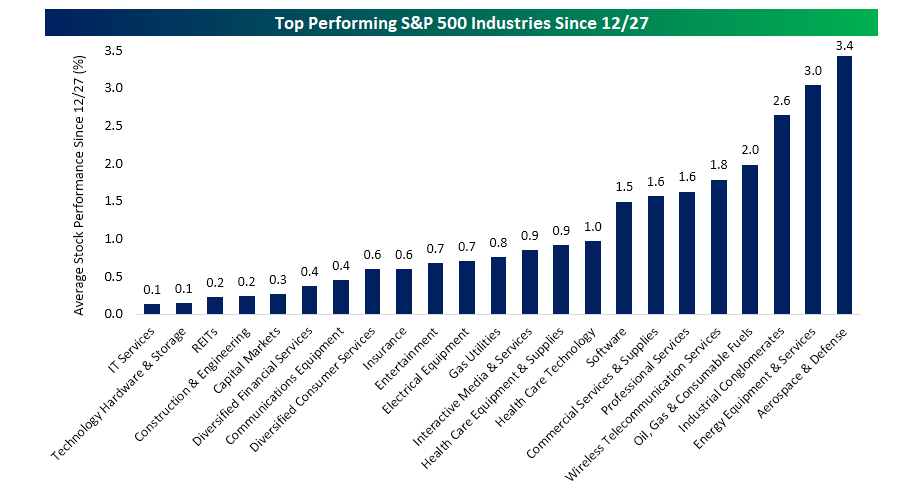 Historically, when aerospace and defense stocks make that big a move without doing so in the prior three months, returns are typically weak — Northrop Grumman, for example, has underperformed by 11.8 percentage points when similarly overbought, compared to its typical move. Defense stocks are also at the top of Bespoke’s overbought industrials list.

“In summation, while the U.S./Iran fight over the past couple of weeks has sent aerospace and defense stocks flying, we would caution against jumping on this momentum trade at this point because downside mean reversion usually occurs after the group gets this extended,” they advise.

The focus was on Iran launching missiles at two bases in Iraq with U.S. forces, which didn’t cause any American casualties. The good news in a sense was that Iran stated that was the extent of its retaliation for the killing of top general Qassem Soleimani.

A 3-year-old Boeing BA, +1.06%  737 — not the 737 MAX aircraft that crashed twice and has been grounded — suffered a fatal crash shortly after takeoff in Tehran en route to Kyiv, killing all 167 passengers and 9 crew on board. Ukraine’s embassy in Iran initially said technical problems were at fault but then deleted the statement.

Former Nissan chairman Carlos Ghosn is due to hold a press conference, his first public appearance since fleeing Japan for Beirut.

On the economics front, the ADP private-sector jobs report for December and consumer credit data in November are due for release. Overseas, Germany reported a 6.5% drop in factory orders in the 12 months ending November.

The Atlantic has a dispiriting, if fascinating, story about how bots are destroying political discourse.

Scientists have discovered a cannabinoid 30 times more potent than THC.

Former First Daughter Chelsea Clinton has had a lucrative career serving on the IAC/InterActiveCorp IAC, +0.63%  board.

Getting a bit too crazy here? A NASA satellite has found a potentially habitable planet, just more than 100 light-years away.