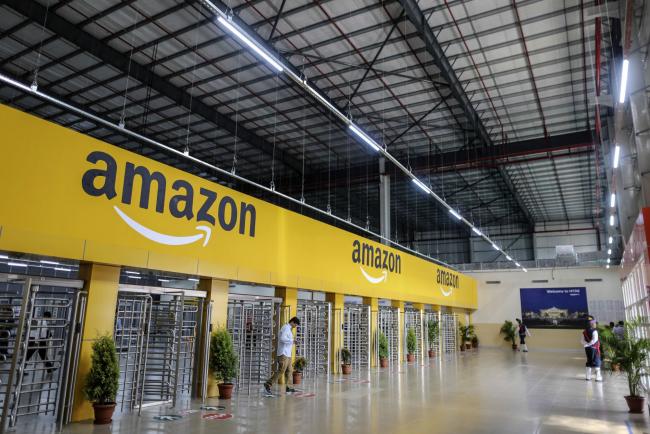 Trade minister Piyush Goyal delivered a stinging rebuke two days after Bezos arrived in New Delhi and touted his efforts to help digitize small and medium enterprises. The investment would bring Amazon’s bet on the Indian market to about $6.5 billion. Goyal told a gathering of foreign ministers from around the world he welcomed an investigation into the company’s alleged “predatory pricing and unfair trade practices.”

Bezos has attracted significant opposition during a tour of India intended to underscore its importance as a growth driver for Amazon. The country’s antitrust regulator initiated a formal investigation hours before his arrival, and retailers affiliated with the Confederation of All India Traders organized sit-ins and public rallies in multiple cities to protest Amazon’s traditional cut-price approach and exclusive-selling practices.

Outside the venue of Amazon India’s annual event for small retailers Wednesday, demonstrators held banners proclaiming “Amazon, go back!” and with Bezos’ face crossed-out. The CEO has sought a meeting with Prime Minister Narendra Modi but that hasn’t come through.

Amazon has sought to counter the negativity with a PR offensive. From Delhi, Bezos went on to Mumbai where he visited a neighborhood store. It’s these small stores that are up in arms against the retail behemoth. The chief executive then rubbed shoulders with Bollywood personalities — Amazon is plowing money into creating Bollywood-dominated content for its Prime Video service to lure movie-mad Indians. On Friday, the company declared it planned to create a million jobs within the country by 2025. The retail giant said it had already created 700,000 jobs in six years of operating its marketplace there.

Still, Goyal’s comments were an indication that Modi’s government is trying to safeguard the interests of smaller Indian traders, the traditional voter base of his Bharatiya Janata Party, as elections approach in the state of Delhi, home to the country’s capital.

Soon after Goyal spoke, the chief of his party’s foreign cell, Vijay Chauthaiwale, tweeted barely-veiled criticism of the Washington Post, which is owned by Bezos. The U.S. newspaper has been criticized by the BJP and its allies for its coverage of the Modi government’s increasingly right-wing policies.

The flare-up suggests India is turning increasingly hostile to the monopolistic practices of foreign e-commerce players that dominate the burgeoning market. Responding to widespread complaints, India restricted foreign direct investment in multi-brand retail and this has forced Amazon and Walmart (NYSE:) Inc.’s Flipkart, the two biggest e-commerce players in India, to overhaul business models to comply with new rules introduced in December 2018.

In 2016, New Delhi had said foreign-owned e-commerce platforms could operate as marketplaces — facilitating transactions between sellers and consumers — but not sell directly. Flipkart and Amazon had established wholesale networks to reach their customers. But the more recent regulations target this workaround, banning foreign e-commerce sites from selling goods from companies in which they own a stake or have commercial arrangements with.

Yet resentment toward Amazon and Walmart lingers. On Thursday, Goyal also questioned why an e-commerce marketplace should make losses.

“Anybody who tries to use the e-commerce marketplace model to get into the multi-brand retail space surreptitiously will have to be questioned, will have to be investigated,” Goyal said.

(Updates with job creation in the sixth paragraph)