Home
Stocks
Outside the Box: What do the world’s most successful people do when it’s time to retire?
Prev Article Next Article 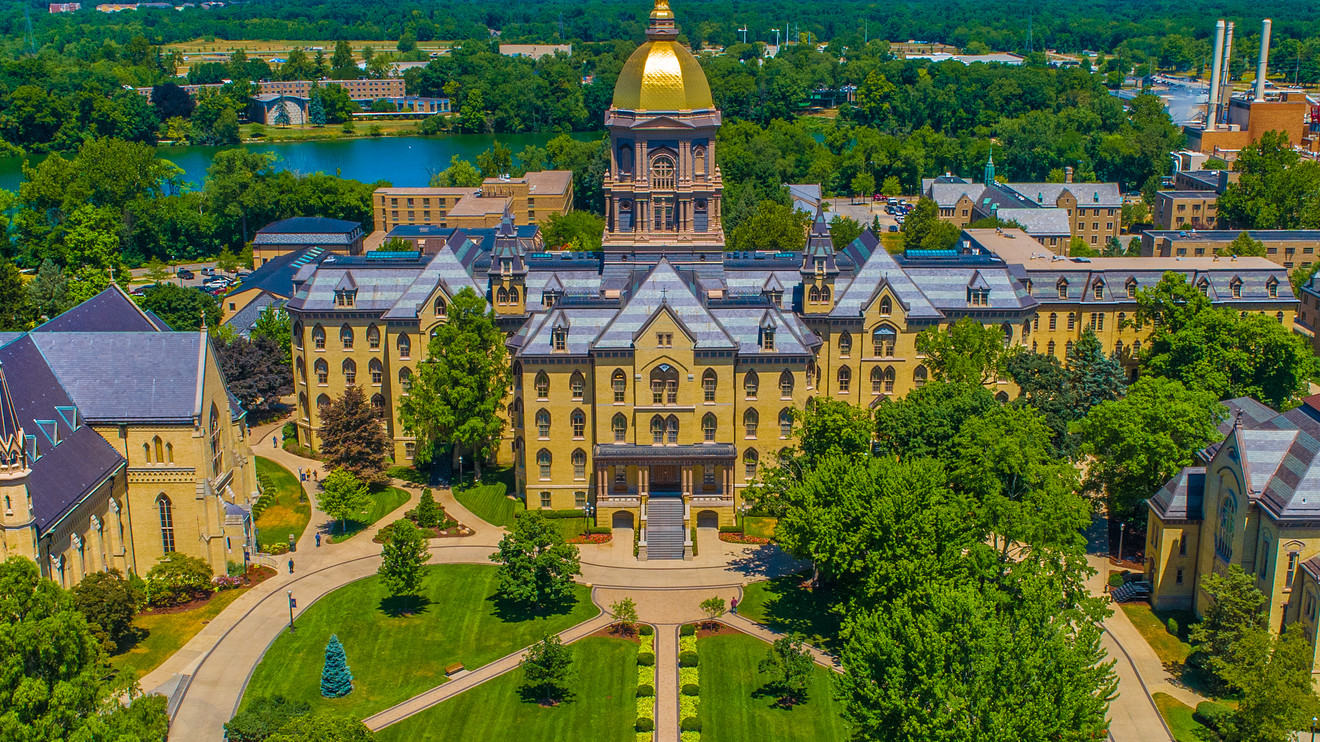 You say retire. I say refire.

When Thomas Schreier Jr. graduated from the University of Notre Dame more than three decades ago, he never envisioned that in his late 50s he’d be teaching a class there called Designing an Inspired Life and regularly walking the South Bend, Ind., campus as the founding director of the university’s Inspired Leadership Initiative.

The initiative, now in its second year, consists of 15 accomplished individuals who have wrapped up two or three decades in successful careers and are eager to devote an academic year to studies at Notre Dame. They can audit classes, attend lectures, work on projects with undergraduates, and travel internationally to Notre Dame’s global hubs, while they reflect on what’s next. For the 2020-21 academic year, the plan is to ramp enrollment up to 25 fellows.

Notre Dame’s joins similar programs at prominent institutions pioneering this concept: the Stanford Distinguished Careers Institute, operated in partnership with the Stanford Center on Longevity, and Harvard’s Advanced Leadership Initiative, a yearlong program for corporate executives and professionals interested in applying their skills to social problems. Other recent arrivals include the University of Texas at Austin, which offers the nine-month Tower Fellows Program, and the University of Minnesota Advanced Careers Initiative, launched in 2017. These programs typically cost $50,000 to $60,000. Minnesota’s program is less costly at $16,000. Fortunately, many of these programs, like Notre Dame’s, offer “scholarships” to ensure that the fees aren’t an obstacle for those whose careers brought rewards other than monetary ones.

I was honored to be invited to speak to this year’s cohort of Inspired Leadership Initiative fellows and others on the campus of Notre Dame about what I’ve gleaned along the way about midlife entrepreneurship and career pivots.

It was also a chance to lace up my sneakers and wander the blustery campus walkways on a winter’s day. I nestled alongside a giant fireplace inside the Duncan Student Center soaking up the buzzy vibes. That was inspiring, too, even if it was for just a fleeting visit.

Some of the fellows I had the chance to exchange ideas with included Cathy David, who recently retired as the executive vice president of merchandising at Pier 1 Imports PIR, -5.82% ; Gloria Fleming, who led a successful career in senior positions in pediatric physical therapy for 42 years in hospitals in the Philadelphia and South Jersey areas; John Gallagher, an international finance executive, who has lived and worked on three continents, Asia, Europe, and North America; Cari Shein,who owns Shein Realty, where for the past 30 years she has acted as principal in manufactured- and modular-home subdivision and park development, and in the rehabilitation and trade of small commercial properties; Michael Thieneman, who retired several years ago from his position as executive vice president for North American and global operations at Whirlpool WHR, +0.09% and then spent three years sailing around the world; and Juliana Otieno, who grew up on a Kenyan sugarcane farm and spent her three-decade career in public health, retiring in 2018 as chief executive officer of Western Kenya’s largest public teaching and referral hospital.

Schreier could easily be a fellow himself. His own career in finance stretched over 30 years. In 2016, he retired from his position as chairman of Nuveen Asset Management, which at that time had in excess of $225 billion in assets under management, and vice chairman of the parent company’s money-management firm.

He was heading in that direction. In his quest to find his what’s next, he applied to be a fellow at both the Stanford Distinguished Careers Institute and the Advanced Leadership Initiative at Harvard University.

“I found myself in 2016 too young to retire and desiring to do something very different than what I was doing before,” Schreier said. “I came to the realization pretty quickly that there weren’t a lot of resources out there to kind of help you discern what is right and to equip yourself for that.”

He was captured by the concept of helping individuals make the transition. “When I learned about the Harvard program, I said, ‘Wow, what an intriguing idea to be thoughtful about what you want to do, and actually spend some time immersing yourself in it, to find a way to align your passion with something as a next act.’ I find the hunger to this to be incredible.”

But his pursuit took a new direction when he dropped his daughter off at Notre Dame to start her freshman year. It began innocently, in a chat with one of his former classmates, Notre Dame’s vice president for university relations, Lou Nanni. Nanni told him that Notre Dame was in the initial stages of ramping up a similar program to the Harvard and Stanford ones, and he floated the idea that Schreier would be a good leader for it.

The idea gained traction with administrators and Jack Brennan, chairman of the board of trustees and former head of the mutual-fund company Vanguard. Together, they convinced Schreier that he was the man to lead the charge.

His second act began by meeting with the heads of the existing programs at Harvard, Stanford and Minnesota and sitting down with Notre Dame faculty to get ideas and feedback on how they might benefit from such a program. “My closest friends will say it took me 35 years to figure out what I really should have been doing,” Schreier said.

The timing was spot-on. Lifelong learning aimed at giving adults the tool kit to redeploy in a new direction is the future. “Today’s longevity is historically unique,” said Elizabeth Isele, founder and CEO of the Global Institute for Experienced Entrepreneurship.

“There is no blueprint for what to do with an additional 20 to 30 years, entrepreneuring seniors around the globe are designing their way into new lives, optimizing their life and work experience in nontraditional career paths and creating businesses of their own — from micro- to multimillion-dollar ventures — in unprecedented numbers.”

And as Marc Freedman, founder and CEO of Encore.org and the author of “How to Live Forever: The Enduring Power of Connecting the Generations,” shared with me: “Longer lives bring with them extraordinary opportunities to do some of our most creative and joyous work,―including new ventures that involve working side by side with younger generations.”

Today’s 60-year-old might reasonably plan to work at least part-time for another 15 years, figures Freedman. “That changes the entire equation about what you want to do, what’s possible to do,” he said.

And showing retirees what is possible is precisely what Schreier has designed along with his co-founder, Christopher Stevens (another encore-career convert), and Joan Martel Ball, the program director.

Asked Schreier: “When you are done with your professional career like I was, but you aren’t done, what do you do? I wasn’t going to say I was retired. I was 55 years old.”

Here are excerpts from my conversation with Schreier in his DeBartolo Hall office on the Notre Dame campus:

Kerry Hannon: What did the work transition mean to you?

Tom Schreier: What it has meant most powerfully at the center is I really do feel I am doing something with purpose. I am able to do and offer something meaningful from all the different things I learned throughout my career. I call it consilience.

I give credit to Provost Thomas G. Burish for recognizing that. My initial vision was to be chair of an advisory board for something like this. … Someone with my background would do that. You wouldn’t actually run the program. I didn’t have powerful academic credentials that the heads of the other similar programs have, but I was flattered to be asked.

Hannon: Were you confident you were doing the right thing? Any second guessing?

Schreier: I didn’t have any second thoughts, but there are moments when you realize you need to make some changes and think, “Oh my gosh, we have serious work to do.”

Hannon: What have been the biggest rewards?

Schreier: I put it into two categories. The daily reward is I walk campus and there is nothing that brings a bigger smile to my face than walking through the student center and seeing one of our fellows sitting with a few students working on a project. It is almost a physical manifestation. They are wearing a hoodie, jeans, knapsack, baseball cap. It’s fun to witness that.

The overarching reward is when I do one-on-one conversations with the fellows and witness this transformation when they realize the capabilities they have that they haven’t tapped into, and they really start to think, “Wow, I can do things I didn’t think I had the capacity to do.”

Finally, there is the reward of watching the 15 very different people forge bonds and friendships with one another. This community element may be the single biggest thing, the power of that is so overwhelming. To have a group like this, where you really have deep dialogues, and you are all at this stage of life and have elected to immerse yourself. It is crazy powerful.

Schreier: The geographic component has been the most difficult. I go back and forth between my home in Minneapolis and campus. When my business career was centered elsewhere from where I lived, I got kind of used to that, but I didn’t think I would be doing this at this stage of my life.

And it has been a balancing act. I do sit on some boards. (Schreier serves as chairman of Allina Health, a leading health-care system based in Minneapolis with over $3.4 billion in annual revenue; as a board member of Piper Sandler Cos. PIPR, -0.33%  , a financial-services firm; and as a trustee of the Minneapolis Institute of Art. He is a member of the Applied Investment Management Advisory Board for the University of Notre Dame and a founding investor in Granite Global Ventures.)

The world of academia is very different from the world of commerce, and it operates differently, so I have to adjust to the two worlds in a way I never had to in the past.

Hannon: Are there any books or resources you turned to or recommend to others seeking a second act?

Schreier: I have read more books in the last 3½ years than I did my entire career. I would start with Richard Rohr’s “Falling Upward: A Spirituality for the Two Halves of Life.” That book is, in essence, [in] the first half of your life you’re creating your vessel, and [in] the second half you figure out what the most enriching way to leverage that boat and fill it.

“Creative Confidence: Unleashing the Creative Potential Within Us All,” by Tom Kelley and David Kelley, is another top choice. Finally, I recommend “Designing Your Life: How to Build a Well-Lived, Joyful Life,” by Bill Burnett and Dave Evans.