Home
Stocks
Caroline Baum: Could Apple be the canary in the coal mine for coronavirus?
Prev Article Next Article 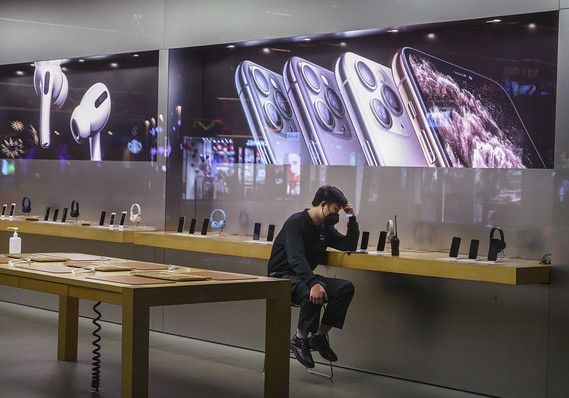 A masked employee sits alone in an Apple store in Beijing that was closed because of the coronavirus threat.

On Monday, Apple became one of the first U.S. companies to warn that it would miss its current-quarter revenue target as a result of the coronavirus, which has constrained iPhone production and curtailed demand for its products in China.

Until now, at least based on the stock market’s “what, me worry,” attitude, the disease, now designated COVID-19, was expected to dent first-quarter growth not only in China but in countries across Asia and Europe, and in the U.S., followed by an rapid bounce back in the second quarter.

But as time passes, the number of infected people and deaths mounts, the level of uncertainty over the accuracy of information emanating from China’s centrally controlled economy grows, and the breadth of the effect on global supply and demand becomes obvious, it may be that markets are too optimistic about the hit to growth from the coronavirus and the likelihood of a swift rebound.

It was only last week that the Dow Jones Industrial Average DJIA, -0.56%  , Standard & Poor’s 500 Index SPX, -0.29%   and Nasdaq Composite COMP, +0.02%   all set records. Yes, the stock market has had a handful of bad days on news related to the spread of the coronavirus but then went back about its business.

No head of steam

The enthusiasm is curious, to say the least. It’s not as if the global economy barreled into the first quarter of 2020 with a head of steam. The eurozone grew a scant 0.1% (not annualized) in the fourth quarter. Germany, Europe’s manufacturing powerhouse, posted no growth. The virus will further hurt German exports, which were already hammered by trade tensions last year.

Japan, the world’s third largest economy after the U.S. and China, just reported an annualized 6.3% decline in real gross domestic product in the fourth quarter, whacked by a triple whammy of a sales tax increase, the aftermath of Typhoon Hagibis, and trade tensions.

Add to that the hit from the coronavirus to its exports to China, Chinese tourism in Japan, and manufacturing output from a dearth of Chinese parts, and Japan could be looking at a dismal first quarter.

Some analysts are even expecting an outright decline in first-quarter GDP growth in China, despite what will be reported. (China’s GDP numbers have been historically challenged on their accuracy.)

Auto factories in China have been slow to restart production. Workers in Wuhan are still under quarantine. Auto makers in other countries are constrained by the disruption to supply chains and lack of parts from China.

To date, more than 70,000 have been infected with the coronavirus while more than 1,800 have died around the world. Most of the deaths have been in Hubei province, the source of the outbreak believed to have originated at a live animal market in Wuhan.

More than half of China’s population — some 780 million people — has some sort of restrictions on its comings and goings. Since China is a major source of both world supply — everything from cars to computers to clothing — and world demand (Chinese consumers have become big spenders), it has the power to inflict a double whammy on global growth.

While companies have been reluctant to quantify the expected effect of the coronavirus on their revenues, Wall Street analysts have started to mark down their earnings forecasts for the first quarter of calendar year 2020 and for the entire year on concerns about supply-chain disruptions, according to Jim Bianco, president of Bianco Research.

Apple is highly dependent on China as both a supplier of its products to the world and as a consumer of those products. So the effect on other companies may be smaller than that on Apple.

But it is not likely to be as minor as the stock market anticipates, given China’s long and far-reaching tentacles.

China has tried to downplay the seriousness of the virus all along, using propaganda and state control to silence those who speak the truth.

At the same time, physicians and scientists outside of China are warning about the increased risk to the rest of the world.

Dr. Robert Redfield, director of the U.S. Center for Disease Control, said the virus could be around for at least another year. And Dr. Anthony Fauci, director of the National Institute of Allergy and Infectious Diseases, said it would take a minimum of a year before a vaccine to prevent COVID-19 could be available.

The U.S. may be the world’s largest economy, but the coronavirus has made it clear that China is the energizer bunny when it comes to manufacturing, accounting for more than one-quarter of global output. It has also become an increasing source of demand, thanks to its growing middle class.

In other words, what happens in China doesn’t stay in China.