Home
Stocks
In One Chart: Obama takes credit for the economic boom and Trump attacks him for it — here’s why they’re both wrong
Prev Article Next Article

Barack Obama generally takes the high road — at least publicly — when it comes to his feelings toward Donald Trump, but there was plenty of subtle shade thrown in the president’s direction this week when this tweet hit the internet:

Eleven years ago today, near the bottom of the worst recession in generations, I signed the Recovery Act, paving the way for more than a decade of economic growth and the longest streak of job creation in American history. pic.twitter.com/BmdXrxUAUf

Did you hear the latest con job? President Obama is now trying to take credit for the Economic Boom taking place under the Trump Administration. He had the WEAKEST recovery since the Great Depression, despite Zero Fed Rate & MASSIVE quantitative easing. NOW, best jobs numbers….

Plot twist: Jeff Snider of Alhambra Investments says both Obama and Trump got it wrong and would perhaps be better off letting the other guy “win” this one.

“An economy that on the tablet of history actually falls somewhere in between the Great Inflation and the Great Depression?” he wrote in a recent research note. “Yes, the two worst periods in the modern economic chronicle. It really is that bad and these guys are arguing over who’s responsible.”

Snider said that the two men, along with George Bush, should actually “hang their heads in shame” over what’s happening to the economy.

“Obama said he started it, made it, kept it going when the ‘stimulus’ bill was signed,” he wrote. “Trump fired back that Obama’s terms were economic disasters (true) and that he was the one who changed everything around (very much untrue).” He said the real con is the measuring stick, and that the BLS’s report showing a hefty economic winning streak is misleading.

“Compared to each and every modern business cycle case the latest one seriously, significantly, obviously under performs every time. And not by a little… The gap is enormous,” Snider explained. “Even though the current ‘win’ streak is up to 112 months, and those prior cycles were punctuated by additional recessions, the earlier examples come out way, way ahead every single time.”

What matters, he said, is the elevation gained when the economy is growing, now how many times it might fall back in between.

“Growth is not a succession of avoiding minus signs,” he wrote. “There can be no more irrelevant measure of economic success.”

From there, Snider posted a series of charts, like this one, to illustrate his point. 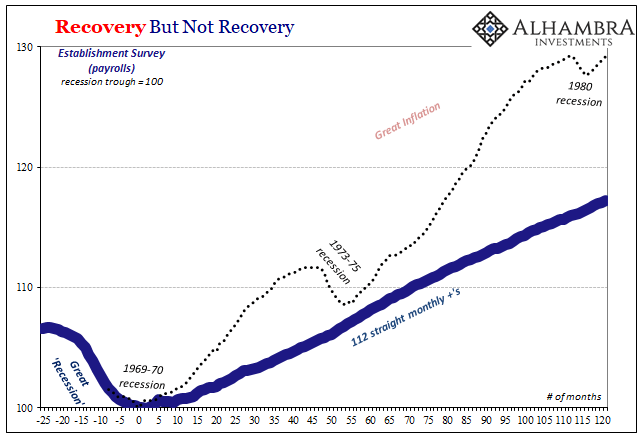 He even included this one from 1950s, “when there were three pretty substantial recessions all taking place within 10 years.” 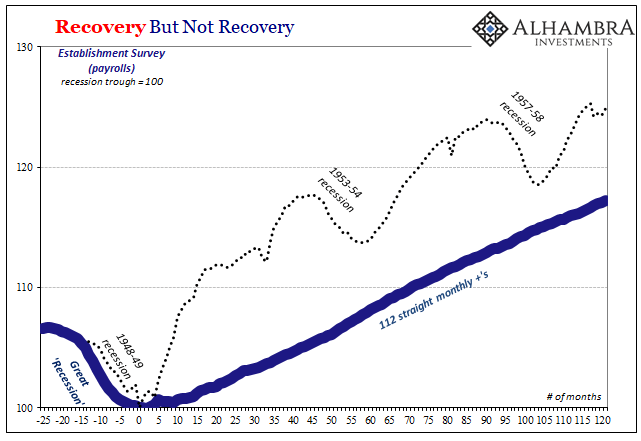 Snider said that, in reality, perhaps the recent economic streak would be better served by some additional recessions sprinkled in along the way, “because that would’ve meant actual growth in between them instead of the dead, lifeless but heavily smoothed ‘recovery’ we actually have experienced.”

Now, he says, the same lack of growth that delivered us President Trump might end up bringing us President Bernie Sanders.

“Everyone says the economy is booming but it actually isn’t, and it hasn’t for such a very long time people have largely forgotten what a boom looks like (it doesn’t look anything like this),” Snider wrote. “Therefore, claims like these go unchallenged. Everyone just nods their angry heads and gets back to finding their way to overturn the whole ‘booming’ system.”

And there you have it: “American’s infatuation with populism and socialism.”