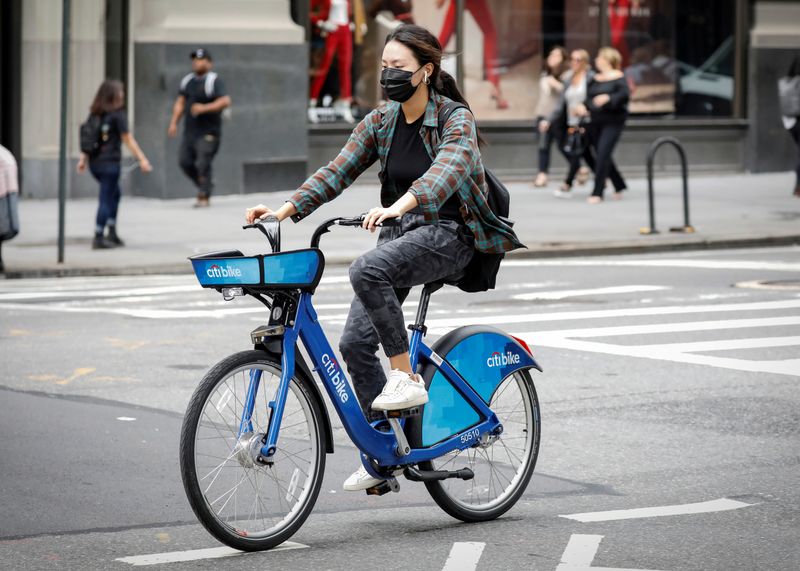 NEW YORK (Reuters) – Lyft Inc (NASDAQ:) will roll out a fleet of several hundred electric bikes for rent across New York City, the company said on Wednesday, 10 months after it pulled them following complaints and injury reports.

The bikes will be available at any of the city’s nearly 900 Citi Bike stations for a per-minute fee, versus a flat rate for non-electric shared bikes.

New York, the most populous U.S. city with over 19 million people, is an attractive market for transportation providers. The city signed an exclusive deal with Lyft to operate its bike-share system after Lyft acquired the previous operator in 2018.

Named after program sponsor Citibank, the blue bikes have experienced surging demand since their debut in 2013. Last year, nearly 21 million trips were completed on about 12,000 bikes, up more than 18% from the previous year, according to city data.

Uber Technologies (NYSE:) Inc, which also operates a bike-share fleet, and electric scooter company Lime have criticized the city for its exclusive relationship with Lyft. Under New York law, throttle-powered e-bikes and e-scooters are not permitted outside the Citi Bike program.

Lyft voluntarily pulled its e-bike fleet in April after what the company at the time said were “a small number of reports from riders who experienced stronger than expected braking force on the front wheel.”

Lyft said it has since switched battery suppliers and changed the bikes’ brake setup.

“We are confident that the return of these sought-after bikes will allow our partners at Lyft to build on the record-breaking ridership Citi Bike saw last summer,” New York City’s Department of Transportation Commissioner Polly Trottenberg said in a statement.