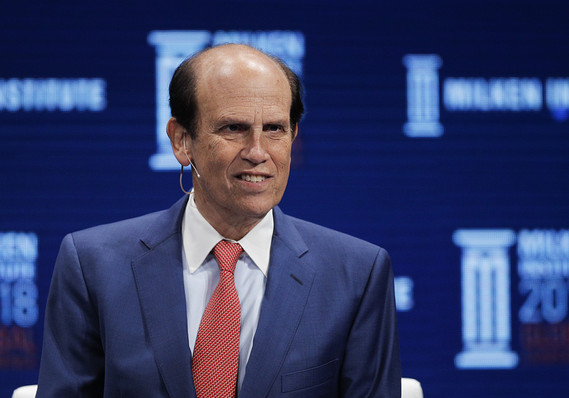 Presidents have an unlimited supply of “Get Out of Jail Free” cards. Donald Trump handed out a bunch of them Tuesday, pardoning or commuting the sentences of a slew of big name felons.

There was Rod Blagojevich, an ex-governor of Illinois (and proud alum of “Celebrity Apprentice”) who solicited bribes to fill political offices, most notoriously the Senate seat vacated by Barack Obama after he was elected to the presidency in 2008.

Trump also pardoned Bernard Kerik, the former New York police commissioner, who pleaded guilty in 2009 to eight federal crimes, including tax fraud. He also pleaded guilty to accepting tens of thousands of dollars in gifts from a New Jersey firm accused of having mob connections, and intriguingly, he was also a close pal and former business partner of former New York Mayor Rudy Giuliani.

There are others, but to me, the biggest bum of the lot is Michael Milken. The disgraced junk bond king was one of the sleazier faces in a series of financial scandals that rocked Wall Street back in the 1980s.

Related: Here’s everyone that Trump granted clemency to on Tuesday

I say this because while Blagojevich and Kerik’s crimes were meant to benefit themselves personally, Milken’s crimes not only did that, but also undermined the integrity of U.S. financial markets. Working from behind his famous X-shaped desk at Drexel Burnham Lambert, once a huge investment bank, he engaged in insider trading, helped arrange illegal takeovers, and defrauded customers. When it all came crashing down, Drexel was wiped out, erasing thousands of jobs, and Milken, whose scheming had made him a billionaire, was thrown in prison.

You might not remember any of this ancient history. But if you’ve ever seen the movie “Wall Street,” the sleazy Gordon Gekko character was modeled on him. “Greed is good,” Gekko said. Milken’s greed led to federal convictions on fraud and conspiracy charges, though since leaving prison in 1993, he has partially redeemed himself through his philanthropic work, which has focused on cancer and education.

Why would President Trump—his re-election campaign shifting into high gear—help these men and in doing so expose himself to criticism that he’s soft on white collar crime?

The answer is one I’ve given before: Donald Trump’s own life and actions suggests that he doesn’t consider white-collar crime to be a big deal. You’ve got to remember that for his entire adult life—the 50 years before his election to the presidency—Trump lived in a world of non-accountability, a world where he could do as he pleased. He witnessed a loose culture in which white collar criminals generally got away with their crimes. Tax evasion, bribery, money laundering dabbling with mobsters and more. It’s probably no coincidence that Trump himself has been accused of each of these things as well. Most folks consider these things to be serious crimes, but my guess is that Trump doesn’t.

It’s also worth noting a few other things. First, Trump—who said that he now considers himself America’s “chief law enforcement officer”—made these moves over the objections of his own While House lawyers, the same ones who just got the president acquitted in his Senate impeachment trial. Meanwhile, we’ve learned that Trump, in recent weeks, got pushback—even from some normally deferential Republicans—who said the pardons were politically risky, particularly in an election year.

Plus, there is this: Trump—who has famous said that he always surrounds himself with only the very best people—has seen many of his hires and friends be convicted of sleazy felonies themselves—not dissimilar from what landed Blagojevich, Kerik and Milken in prison. Trump’s first national security advisor Michael Flynn is awaiting sentencing for making false statements to the FBI. Roger Stone was convicted of witness tampering and perjury. Michael Cohen, Trump’s longtime lawyer, is behind bars now, after pleading guilty to eight felonies, including tax fraud and bank fraud.

Again: White-collar crimes, in Trump’s world view, are not “real crimes.” He is laying the groundwork for the eventual pardons of at least Stone—he has called for his conviction to be tossed out—and Flynn. The only issue in his mind is timing. Were he to spring them during this election season, it would cause an uproar. But if we’ve learned anything in the Trump era, it is that the outrageous behavior all blurs together; a pardon of these sleazy men would be just another unsavory ingredient stirred into this toxic stew of a presidency. No, better to wait until after election day.