Home
Stocks
The Conversation: Both liberals and conservatives tell the wrong story about free speech on college campuses
Prev Article Next Article

When it comes to understanding disputes over free expression on college campuses, such as speakers getting disinvited or having their speeches interrupted, conservatives tend to blame liberal professors for indoctrinating students and ostracizing those who don’t agree with liberal viewpoints. One prominent conservative organization, Turning Point USA, has gone so far as to create a database of faculty it says “discriminate against conservative students and advance leftist propaganda in the classroom.”

Liberals, in contrast, argue that concerns about free speech on college campuses are overblown. They also accuse conservatives of co-opting the language of free speech proponents in an effort to falsely position themselves as victims.

Our research indicates that each of these narratives is flawed. We are researchers who study political behavior, as well as strategies for business.

For the past year, we have been studying free expression issues at the University of North Carolina at Chapel Hill, a campus that has had a number of flare-ups related to free expression in recent years. We wanted to look beyond single episodes and better understand the typical student’s experience concerning free expression.

We found that students who identify with the political right do indeed face fears of being ostracized that students who identify with the left do not. However, we also found signs that right-leaning students worry at least as much about reactions from peers as from faculty. Much of this plays out silently in classrooms at Chapel Hill and — we believe — at other colleges and universities throughout the nation.

It’s not about professors

For our research, we sent surveys to all 20,343 students — the entire undergraduate population at Chapel Hill. Two-thousand of these students (randomly selected) were offered a $10 incentive to participate in the survey. This feature helped ensure we heard from a representative cross section of students. We received 1,087 complete responses. About half of those respondents were those who got $10 for their participation.

For each student who responded, we randomly chose one class from their schedule and asked — for that particular class — how many times during the semester they kept a sincere opinion related to class to themselves because they were worried about the consequences of expressing it. We found a large liberal/conservative divide — 23% of self-identified liberals said they censored themselves at least once, while 68% of self-identified conservatives did so. 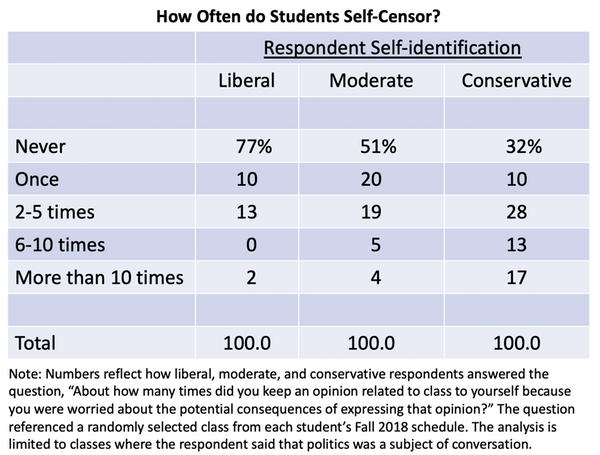 You might presume that behavior by instructors is to blame for this stark difference. But the evidence we gathered does not seem to support this view. 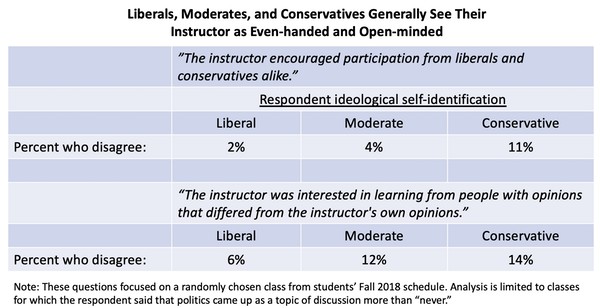 Pressures that disproportionately affect right-leaning students were evident outside the classroom as well. We asked how often students hear “disrespectful, inappropriate, or offensive comments” about 12 social groups on campus. Students — even those who identify as liberal — acknowledged hearing such comments directed at political conservatives far more often than at any other group. 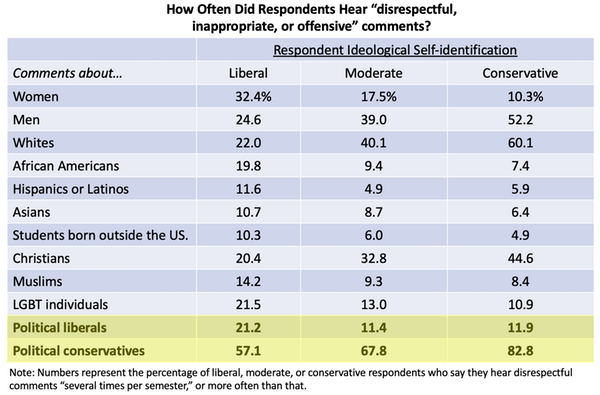 We also examined whether liberal or conservative students might be more inclined to employ obstructionist tactics, such as blocking the entrance to a public event that featured a speaker with whom they disagree. To do this in an evenhanded way, we presented students with a list of 10 political opinions. Then we asked them to choose the opinion that they find most objectionable. We chose a slate of opinions that really exist at UNC, such as ones concerning affirmative action, LGBT rights, and Silent Sam — a Confederate monument that is subject of a long-running campus controversy.

In order to better understand the typical experience of a university student, we believe it’s important to go beyond singular dramatic confrontations. The deeper story about free expression on campus, as our study shows, is not just about the shouting that takes place during high-profile incidents on campus. It’s also about what students say — and feel compelled to keep to themselves — in lecture halls and classrooms throughout the school year.