Home
Stocks
The Margin: It’s a bird, it’s a plane… it’s a guy in a jetpack soaring 6,000 feet over Dubai
Prev Article Next Article 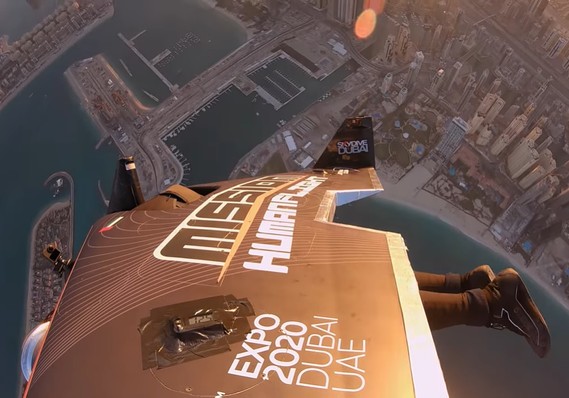 A road-less world seemed pretty fantastical when Doc uttered that line from the 1985 classic, “Back to the Future.” But after watching this video, in which pilot Vince Reffet flies a jet-powered carbon-fiber suit above Dubai… well, not so much:

The video, courtesy of Jetman Dubai, came out on Friday and has already racked up more than a million views. Reffet is shown flying some 6,000 feet in the air with speeds approaching 250 mph.

If it looks familiar, it’s because another video went viral five years ago showing Reffet and his fellow pilot Yves Rossy performing an aerial spectacle in the same city. This time around, however, the video shows the pilot taking off from a standing position before hovering and shooting off into the sky.

“It is the first time that a Jetman Dubai pilot could combine hovering safely at a limited altitude and flying aerobatics at high altitude in the same flight,” the company said in a note accompanying the vide. “Controlled from the ground by the human body, the equipment enables Jetman Dubai to reach speeds of 400 kmh, as well as hovering, changing direction and performing loops.”

Jetman Dubai is still working on how to land — seems kind of important — but for now, they’re pleased with the progress they’re making.

“We are so happy we achieved this incredible flight. It’s the result of extremely thorough teamwork, where each small step generated huge results,” Reffet said in a statement. “Everything was planned to the split second, and I was overjoyed by the progress that was achieved. It is another step in a long-term project.”