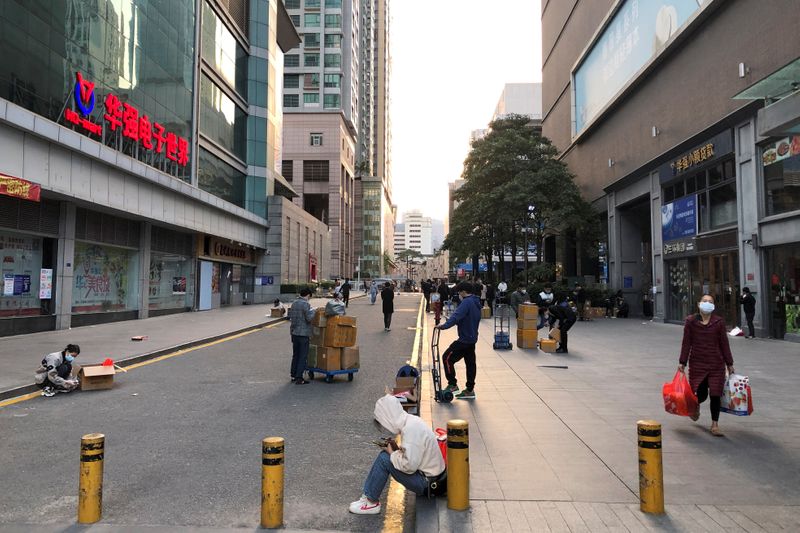 SHENZHEN, China (Reuters) – While coronavirus fears curtail much of China’s bustle, traders are getting back to business at the world’s largest electronics market, buying and selling from bags and suitcases on the streets outside their shut premises.

The Huaqiangbei area in the southern city of Shenzhen is home to dozens of multi-storey malls housing around 38,000 trading desks packed with reels of microchips, phone parts, and other components. The markets remain closed this week, with vendors uncertain of when formal business will resume.

But word traveled across groups on the WeChat messaging platform that some were doing business on the streets. By Tuesday afternoon, hundreds of traders had gathered.

“I think it’s pretty funny, and the atmosphere here is great,” said Xu Peng, a microchip trader in a crowd of about 30 traders outside one of the market buildings.

Many of the traders clutched bags full of electronic wares as they scanned their phones and waited for buyers or suppliers.

“This place is finally starting to wake up,” he said, before taking a supplier’s call.

Shenzhen is one of the cities hardest hit by the coronavirus outside of Hubei province, with over 400 confirmed cases. Many apartment blocks have banned visitors and require residents to obtain permission slips before going outside.

Yet so far, police have left the traders at Huaqiangbei alone. An employee at the local government department responsible for virus safety inspections said the traders were not breaking any rules.

Huaqiangbei acts as the major matching hub for companies across the world and the factories of southern Guangdong province. Many factories are closed and suppliers are unable to return to the market, worrying traders.

The virus outbreak is having a big impact, Cheng Weiling said through her facemask while checking her phone.

“Lots of people are still trapped in their hometowns and so lots of places can’t open,” she said.

“There’s lots of demand, but some people just can’t get hold of the inventory,” he said.

Traders lose significant income while the shutdown continues, said Donny Zhang, CEO of Sand and Wave, a hardware consulting and sourcing company based in the Huaqiangbei area.

“A small counter might only be one meter wide in size, but their yearly revenue could be 10 million yuan ($1.43 million),” he said.

There are signs that China is starting to return to normal, with more traffic in major city streets this week than last. Over half of large-scale enterprises in Guangdong have returned to work, the provincial government said on Tuesday.