Home
Stocks
As Democratic candidates debate Obamacare and Medicare for All, Americans say their biggest concerns are cutting health-care and drug costs
Prev Article Next Article

It didn’t take long for the candidates at Wednesday night’s Democratic presidential primary debate to turn their attention to health care.

Sen. Bernie Sanders, a Vermont independent, said that he would never sign a bill that would reduce benefits enjoyed by Las Vegas’s powerful culinary union. The union has expressed reservations over “Medicare for All,” which Sanders backs. Medicare for All, which is also backed by Sen. Elizabeth Warren of Massachusetts would in effect replace the current health-insurance system with a single-payer national health insurance program.

New polling taken in the runup to the debate suggests that Americans are listening. The cost of health care and prescription drugs — rather than wholesale policy reform like Medicare for All or combating issues like climate change — rank highest among Americans’ concerns as the presidential primaries get under way.

About eight in 10 people — 89% of Democrats and 76% of Republicans — polled for a new Politico-Harvard T.H. Chan School of Public Health survey said it was “extremely” or “very” important to take steps to lower health-care costs, while 75% of respondents said the same of driving down prescription drug costs.

Drug prices have also risen over time, and nearly one in four Americans who take prescription medication say they have trouble affording their drugs, according to the Kaiser Family Foundation. Forty-eight out of 49 common brand-name prescription drugs in the U.S. increased in price from 2012 to 2017, according to a 2019 JAMA study. The top-selling drugs’ prices rose by a median of 76% over those six years, with most increasing once or twice a year.

Meanwhile, putting in place a Medicare buy-in program ranked No. 6 out of 22 priorities presented to poll respondents. Implementing Medicare for All, which would eliminate private health insurance in favor of a government-run system, was ranked at No. 10. Addressing the threat of climate change through regulation and spending, backed by 52% of respondents, was No. 11, according to the survey of more than 1,000 adults from Jan. 21 to Jan. 26.

The poll’s results were published just as Sanders who has made Medicare for All a central part of his bid for the Democratic presidential nomination, saw a substantial boost in his polling numbers ahead of Wednesday night’s Las Vegas debate. Sanders now commands a sizable lead at 32%, according to the new Washington Post-ABC News DIS, +1.55%  poll of Democratic and Democratic-leaning voters, outstripping longtime frontrunner Joe Biden’s 16% and billionaire Mike Bloomberg’s 14%. 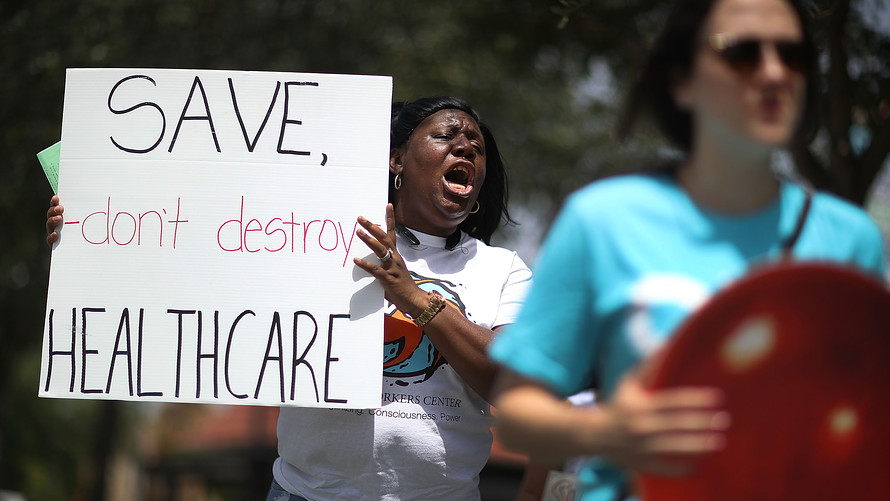 About eight in 10 people in a new poll said it was ‘extremely’ or ‘very’ important to take steps to lower health-care costs.

Warren, another Medicare-for-All advocate, landed in fourth place at 12%. Former South Bend, Ind., mayor Pete Buttigieg, who supports a public option he calls “Medicare for all who want it” alongside private insurance, received 8% of support, while Minnesota Sen. Amy Klobuchar received 7%. Biden, Bloomberg and Klobuchar also support offering a public option while keeping private insurance in place, as well as improving on the Affordable Care Act.

The average annual premium for work-sponsored family health insurance hit $20,576 a year in 2019, a 5% increase over the previous year, according to the nonprofit Kaiser Family Foundation. Workers paid $6,015 of that cost, on average, with employers covering the rest.

Meanwhile, the share of people in families with problems paying medical bills in the past year fell to 14.2% in 2018 from 19.7% in 2011, according to recent data from the National Health Interview Survey. Respondents who were black, younger than 18 and female were all more likely than other groups to say they or their family had trouble with medical bills.

“Even among Democrats, the top issues are pocketbook issues — not the big system reform debates,” Robert Blendon, a professor at the Harvard T.H. Chan School of Public Health who worked on designing the recent poll, told Politico.