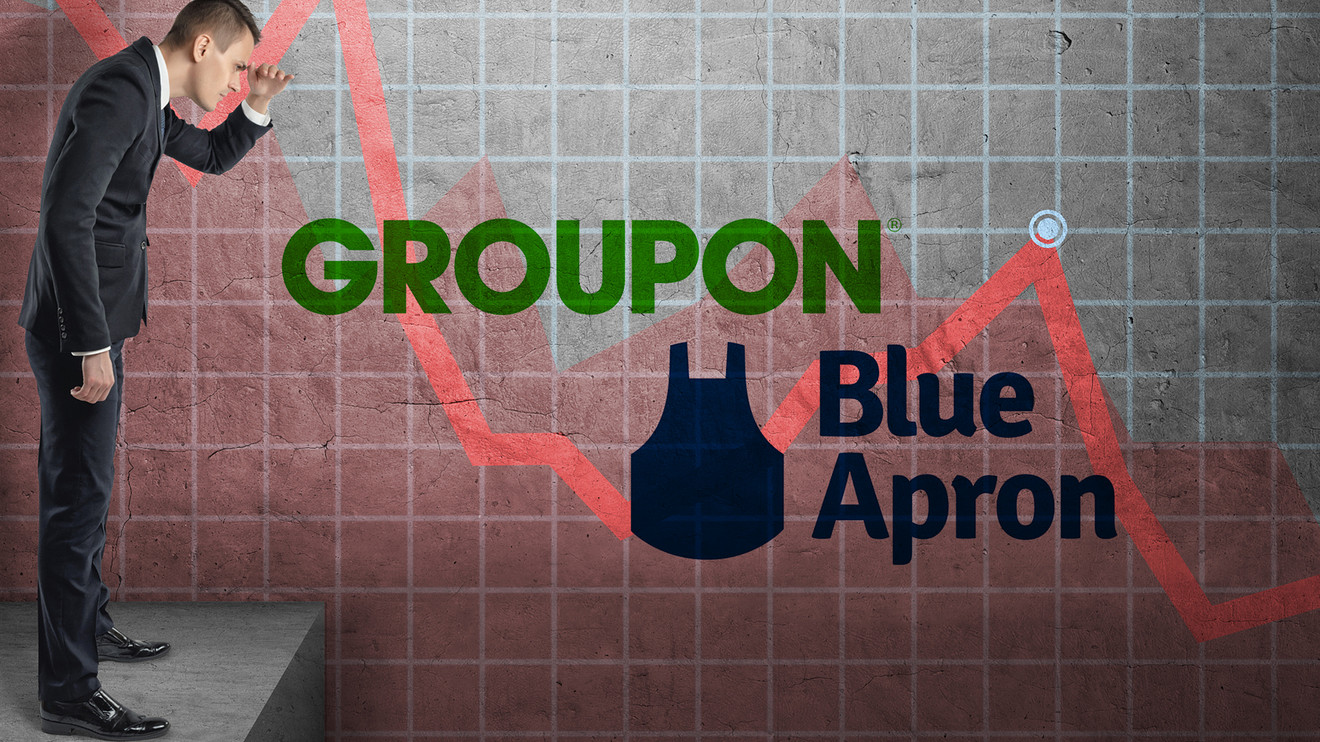 Groupon Inc. shares slid 43% Wednesday and Blue Apron Inc. was down 22%, after far weaker-than-expected earnings from both companies revived concerns about the sustainability of their business models.

Groupon’s GRPN, -44.26%  decline marked the biggest one-day selloff since its 2011 IPO and came in heavy volume of 119 million shares that made it the most actively traded stock on U.S. exchanges. The company said late Tuesday it plans to exit from the Goods category to focus on the $1 trillion “local experiences” market.

The news came as it reported a 23% decline in quarterly revenue, named Melissa Thomas as new chief financial officer, and said it plans to pursue a reverse-stock split to boost the price of its stock.

Wedbush analyst Ygal Arounian said the decision to exit Goods was the right one and would remove a significant drag on value.

“We see the 4Q results (and the exit of Goods) as increasing the likelihood of a takeout/merger (which we’ve written about previously), with our view that Groupon and Yelp YELP, -1.53%  would make a value-creating combination and that IAC IAC, -0.35% can be a trusted steward to manage,” the analyst wrote in a note to clients, reiterating his neutral rating on the stock.

Groupon’s business model has been the subject of critical academic research, ever since the company first started its daily deal coupon business back in 2008, offering everything from spa and beauty treatments to restaurant deals.

That business involves signing up merchants that are willing to offer sometimes deep discounts on goods and services aimed at local consumers in the hope they can upsell them other services to make up the price shortfall. Groupon makes money by taking a commission from the discounted price.

For consumers, the draw was the perceived benefit of group buying. As long as enough people wanted the same thing, Groupon could help them get a good price. For merchants, the downside became apparent when the service mostly attracted bargain hunters, who were unwilling to spend more than the face value of the coupons. Some of the small-business owners that used the platform found themselves overwhelmed operationally when a deluge of customers took up the coupon offer.

“Some businesses were just ill-prepared to handle the service and support of this wave of low-quality, low-margin customers coming in the door,” said Jonathan Treiber, chief executive of RevTrax, a platform that manages special offers and discounts. “Groupon does drive traffic, but merchants have a love/hate relationship with it.”

David Reibstein, professor of marketing at The Wharton School, said there was never a compelling reason for Groupon to exist.

“There are two things that possibly happen with Groupon,” he said. “One is you have a customer that was paying full rate, but is now paying less and is just cutting margin away from the merchant. The second is that the people who are signing up are now occupying spaces that full-paying customers were going to use.”

Customers become unhappy when a Groupon service is so popular that suddenly they can’t get an appointment, he said. Merchants are unhappy when dealing with the negative impact of a low-quality customer base, he said. The platform is also vulnerable to changes in the economic cycle, he said.

“To the degree that Groupon is basically dependent on merchants that have excess capacity and want to sell it off, when they are doing better, that capacity goes away,” he said.

Reibstein said he is surprised the company has lasted as long as it has or that so many competing services have sprung up. “Competitors have the same issues and one thing is that they are training customers to wait for the deal, which is not good either.”

Blue Apron’s APRN, -17.62%  problems lie in its cost structure, with manufacturing and marketing costs elevated by the basic requirements of a business that delivers fresh food ingredients to customers in expensive packaging. The company has never made a profit, hurt by failed partnerships, that include a deal to sell its meal kits at Costco Wholesale Corp. COST, +0.30%, among other issues.

“From the beginning, Blue Apron failed to put in the necessary manufacturing, supply chain, procurement and logistics that would allow them to manufacture meals with low unit costs and be able to consistently meet customer demand cost efficiently,” said Brittain Ladd, founder and CEO of Six-Page Consulting, which specializes in retail and supply chain management.

The company is operating in a highly competitive business but has high customer acquisition costs and low retention rates. The company’s customer count fell to 351,000 in the December quarter from 557,000 in the year-earlier quarter, according to its latest earnings report.

The company’s cost of goods sold (COGS), excluding depreciation and amortization, as a percentage of net revenue, rose 20 basis points (0.2 percentage points). Marketing expense was $12.1 million, or 12.8% of revenue, in the fourth quarter, compared with 14.4% or revenue a year ago, while product, technology, general and administrative (PTG&A) costs fell 22% to $35.3 million, mostly due to staff cuts.

“While we’re confident that Blue Apron will drive leverage in COGS, marketing, and PTG&A expenses in FY:19, we believe visibility into the timing of a potential reacceleration in customer growth remains limited as many of the company’s new initiatives are just beginning to ramp up,” said Stifel analysts led by Scott Devitt, reiterating their hold rating on the stock.

The company’s subscription model is another problem, according to Six-Page Consulting’s Ladd. “They didn’t do enough to offer flexibility, they need more quality food, more recipe options and a better subscription model,” he said. “Customers simply stopped using them as they were underwhelmed.”

The meal-kit business can work, as evidenced by Blue Apron competitors such as Hello Fresh, Home Chef and others who have succeeded, he said. But the trend is slowly being replaced by healthy ready-to-eat meals as consumers clamor for greater convenience.

Blue Apron said it is evaluating its strategic alternatives, including a partnership, a capital raise either through the public of private markets, or a sale of the company. Ladd said its best hope is to be acquired, and named several potential acquirers, including food companies like Kraft Heinz Co. KHC, -0.07% and Campbell Soup Co. CPB, -0.85%, delivery service Instacart and even Starbucks Corp. SBUX, +1.02%.

See: Blue Apron stock soars as news of Beyond Meat menus sparks a round of short covering

Starbucks would acquire a team that has expertise in creating tasty meals and could help bolster the coffee shop chain’s food offering, he said. And Blue Apron is cheap too, after it conducted a reverse stock split that saved it from being delisted but reduced the number of shares available. “It has no capital value so they could buy it for pennies on the dollar,” Ladd said.

Treiber from RevTrax said Blue Apron would be a strong takeover candidate for Walmart Inc. WMT, -1.63%, as it expands in grocery delivery and online grocery, or Target Corp. TGT, -0.37%, which is lagging in food.

“Target doesn’t have a strong online grocery business,” he said. “It could catapult them into being a real player, where over time, they could augment meal delivery with other services.”