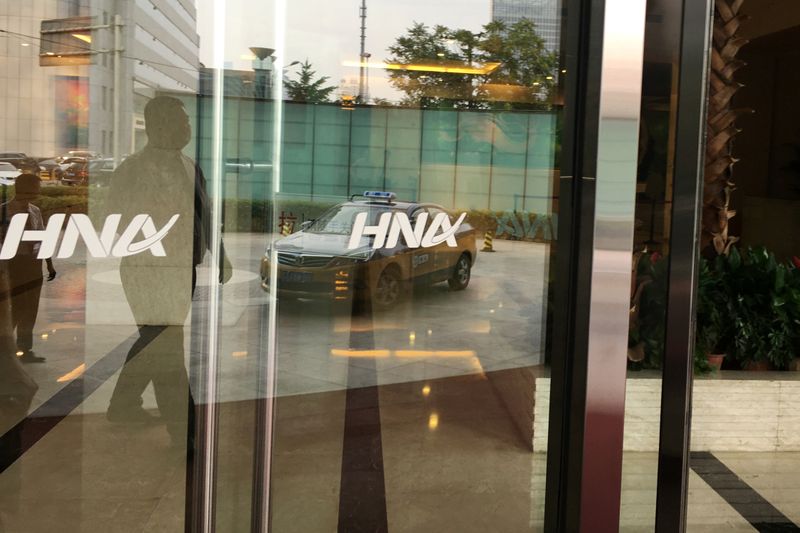 By Zoey Zhang and Brenda Goh

BEIJING/SHANGHAI (Reuters) – Shares in affiliates of HNA Group surged on Thursday following a news report that China plans to take over the debt-laden conglomerate as the coronavirus outbreak has further hit its ability to meet financial obligations.

The government of the southern province of Hainan, where HNA [HNAIRC.UL] is based, is in talks to take control of the group and sell off its airline assets, Bloomberg said on Wednesday, citing people familiar with the matter.

HNA, which controls or holds stakes in a number of domestic carriers including its flagship Hainan Airlines (SS:), did not immediately respond to requests for comment on the report.

China’s aviation regulator said last week it would support restructuring or mergers to help airlines cope with the fallout of the epidemic, which has prompted carriers to cancel thousands of flights.

Air China and China Eastern are prepared to hold talks, but a deal could take time as the industry also battles the fallout from the virus outbreak, a source with direct knowledge of the matter told Reuters.

Air China and China Eastern did not immediately respond to requests for comment. China Southern declined to comment.

Shares in Hainan Airlines, HNA Innovation (SS:) and HNA Investment Group (SZ:) closed up by their 10% daily limit after the news report of the planned takeover.

Heavily indebted HNA Group has restructured jet orders with Europe’s Airbus (PA:) in a deal that includes an order for dozens of A330neo jets, two people familiar with the matter told Reuters.

HNA Group was once one of China’s most aggressive dealmaking firms, spending $50 billion on acquisitions that included stakes in Deutsche Bank (DE:) and Hilton Worldwide (N:), and prime property in New York, Sydney and San Francisco.

Its total borrowings were 706.7 billion yuan ($100.6 billion) as of the end of June, data filed to the government shows.

“HNA does have money to pay back but the money is actually within its subsidiaries, which they cannot draw on to pay back the bondholders,” said Warut Promboon, head of credit research at Bondcritic.

“There are still bonds coming due and if the government is taking it over, we believe they have to honour the debt.”

HNA began unwinding many acquisitions to focus on its core airlines and tourism businesses after racking up high levels of debt and drawing regulatory scrutiny.

But the prices HNA has sought and the complex structures, loans and other business bonds among its holdings have made it tough to unwind them, bankers said.

In December, Chairman Chen Feng said the firm had delayed some salary payments in 2019 because of cash flow shortages, but vowed to resolve liquidity risks in 2020.

However, the virus outbreak has pressured its core airline business this year, with Hong Kong Airlines, part-owned by HNA, announcing a plan to cut 400 jobs this month.