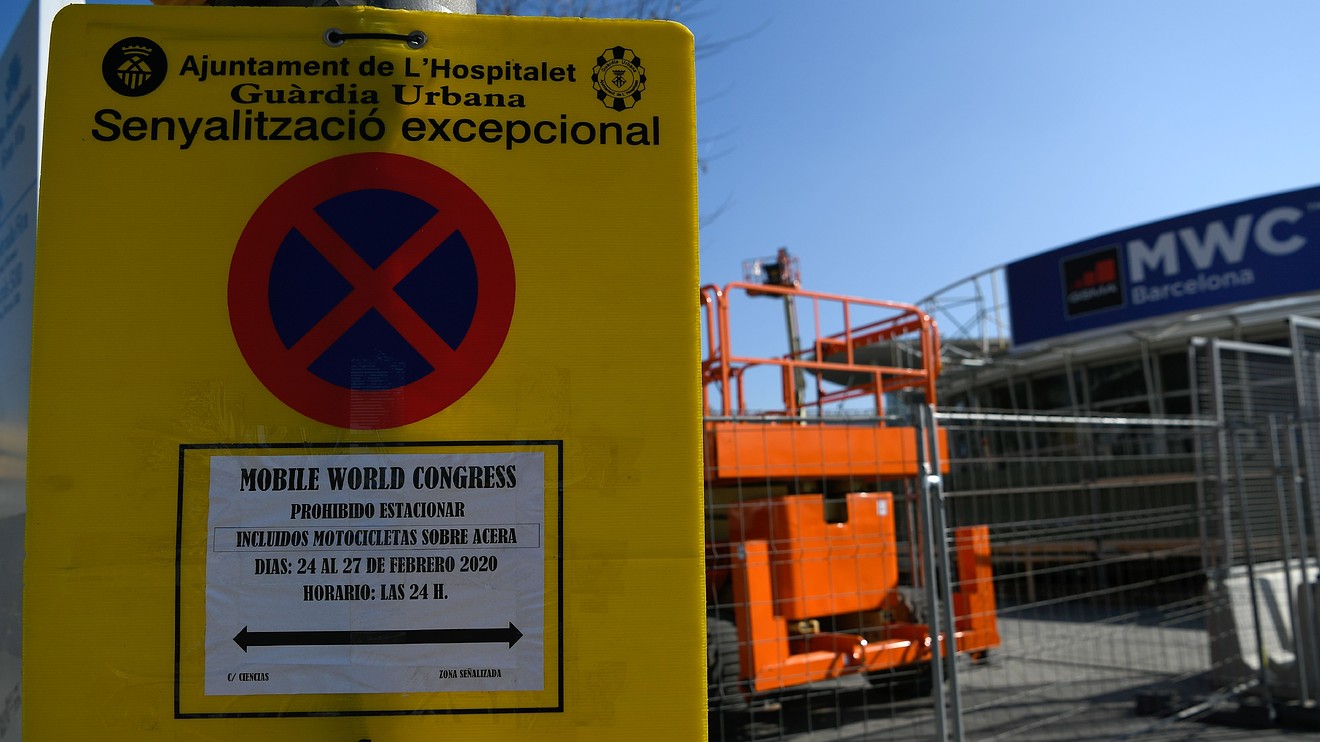 For months, Metawave Corp. eagerly anticipated one of its most important events of the year: 20 one-on-one meetings with key business partners that would launch the San Diego-based startup’s business plans into 2020.

Those meetings were set at a private suite in Barcelona, Spain, to coincide with the influential Mobile World Congress convention. When that show was canceled due to fears about the COVID-19 outbreak, Metawave was forced to traverse the U.S. to make good on all of its MWC appointments.

“It was an inconvenience because it created more work for us in terms of travel,” Metawave Chief Executive Maha Achour told MarketWatch in a phone interview. “I’ll need to go to Silicon Valley and New York for meetings. The rest will be over Zoom ZM, +0.36%  .”

Achour, whose company focuses on radar sensing for automated driving and wireless solutions for 5G deployments, was one of a handful of startup CEOs who agreed to broach the topic of the effects of MWC’s cancellation. Most declined to discuss their plans to make up for the lost week of face-to-face time with potential customers and partners.

And it could just be the beginning. On Thursday, AT&T Inc. T, +0.16%  said fears of COVID-19 led it to pull out of RSA, one of the largest security conferences in the world, which takes place next week in San Francisco. International Business Machines Corp. IBM, +0.13%  dropped out of RSA last Friday, the same day Facebook Inc. FB, -1.45%  canceled a March marketing summit in San Francisco.

See also: What Apple, Walmart and other U.S. companies are saying about the coronavirus outbreak

RSA organizers, whose show in San Francisco next week is expected to draw more than 40,000 people, said the event will proceed as scheduled. A spokeswoman for the show referred to its website.

“Since our last update, the number of individuals, including those from AT&T Cybersecurity, who have canceled their registration is approximately 1.2 percent of the total number of expected attendees,” the organization’s website said, adding that 13 companies, including six from China and six from the U.S., have canceled so far.

The abandonment of a show as big as MWC — which draws more than 100,000 attendees from 200 countries — stings economically for the host city, mobile industry and entrepreneurs from across the globe who attend in hopes of doing deals. Indeed, companies who poured money into setting up elaborate booths and paid fees to exhibit are out of luck. In an email to MWC attendees on Wednesday obtained by MarketWatch, show` organizers GSMA said it was not granting refunds, citing a “force majeure” clause in its standard agreements with exhibitors and sponsors.

MWC’s cancellation bodes darkly for a slew of trade shows in coming months if the outbreak continues into the spring. Organizers of the international technology summit EmTech Asia last week announced the event, scheduled for March 24-26 in Singapore, had been postponed until August because of coronavirus concerns.

The conference season especially kicks into high gear soon in Silicon Valley. The Game Developers Conference, planned for March 16-20 in San Francisco, is also proceeding, though without Chinese participants. On its website, show organizers said about 2% of planned attendees were from China and they were affected by the Trump administration’s temporary ban on foreign nationals who have been in that country within the past 14 days.

A Facebook spokeswoman said it is monitoring the situation closely but “there are no changes to F8 planned at this time.” Microsoft, which is attending RSA, is expected to proceed with Build. Google and Apple did not respond to email messages seeking comment.

We may see more shows go by the wayside or scale back, says Ralph de la Vega, the former AT&T vice chairman who consults startups and introduces them to larger companies at trade shows.

“It’s crazy to promote events with a world-wide attraction,” he said. “It was wise of Mobile World Congress to shut it down. You can miss an event and make up for it with video calls. For a company employee to be infected has a much-longer impact on a business.”

Click here: For the latest on the economic effects of COVID-19

Videoconferences and individual meetings cannot typically replace what a conference provides, however. MWC, RSA and private events help tech companies roll out their products and business strategies to kick off the year, offering a blueprint on where they are headed. Think of it as a nerdy State of the Union address.

“It’s a painful loss of investment for smaller companies who devoted a large percentage of their budgets to attend,” telecommunications analyst Roger Entner told MarketWatch in a phone interview. “Many of them go to shows with the idea of walking the show floor for a chance meeting with a $50 billion company or to see and feel the pulse of a conference.”

A hole in the tech conference calendar could also hinder the development of new technology. This year’s edition of MWC, for example, was expected to highlight new 5G phones from nearly every major Android vendor, as well as updates about the networks running the ultrafast connectivity and what it means for consumers and enterprises. Now, there are concerns about a slowdown in the spread of 5G.

“The delayed product releases that will occur as the result of this show, as well as the supply side challenges surrounding the coronavirus’ broader impact in China, could potentially delay the smartphone industry’s return to growth into 2021 if the current state of flux is not settled soon,” Futuresource Consulting analyst Stephen Mears warned.

Larger companies should survive with little to no repercussions. Samsung Electronics Co. Ltd. 005930, -0.33% and Cisco Systems Inc. CSCO, -0.17%  are typically two of the biggest names at MWC, but they announced products before MWC, as is typical. Samsung announced new foldable and 5G phones at an event in San Francisco in early February, while Cisco shared its new products and services at a conference in San Jose in December.

“It’s not really that big a deal for us,” Cisco Chief Financial Officer Kelly Kramer told MarketWatch in a phone interview.

But what about a startup without the resources of a Samsung or Cisco that can’t afford a Plan B?

They resort to remote meetings, as Light CEO Kaiwei Tang is doing. His company launched a simplified 4G phone in November and promoted it at CES. But after planned meetings with Rogers Communications Inc. RCI.B, -0.99%  and Vodafone Group VOD, -0.47%  fell through in Spain, he is speaking to them via phone and hopes to conduct more meetings at the South by Southwest show in Austin, Texas, next month.

“Mobile World Congress is where global carriers go. There is no real replacement,” Tang told MarketWatch in a phone interview. “I’m kinda sad they canceled it, but I understand it was the sensible move.”

Software company WalkMe last week announced the radical solution of a nine-hour virtual conference Feb. 26 in lieu of MWC that will let dozens of startups and large companies present their products online. In all, 120 have expressed interest in participating, including AppsFlyer and OpenLegacy Inc.

“We toyed around with the idea of presenting ourselves, but decided to invite others,” Rafael Sweary, co-founder and president of WalkMe, told MarketWatch in a phone interview. “We put $200,000 into a booth that won’t be used. This is a big thing that is difficult for everyone.”

Read: How the stock market has performed during past viral outbreaks

The cities that host these events could face problems as well. Facebook’s canceled marketing conference typically brings about $11 million in spending to San Francisco, with about 5,000 attendees expected to stay at 10 hotels, according to San Francisco Travel Association, which also lamented other losses. Mobile World Congress, by comparison, is estimated to be worth about $540 million to Barcelona and provides 14,000 part-time jobs for local workers.

“Naturally we are disappointed by [IBM’s] decision. A short-term cancellation will have an impact on hotels, restaurants, retail stores and attractions,” Joe D’Alessandro, president and CEO of San Francisco Travel, said in a statement.

Facebook and Apple hold their conferences at the San Jose McEnery Convention Center. According to Team San Jose, F8 and WWDC helped contributeto the more than $130 million that conferences and events brought to San Jose hotels, restaurants, shops, and attractions in 2018.