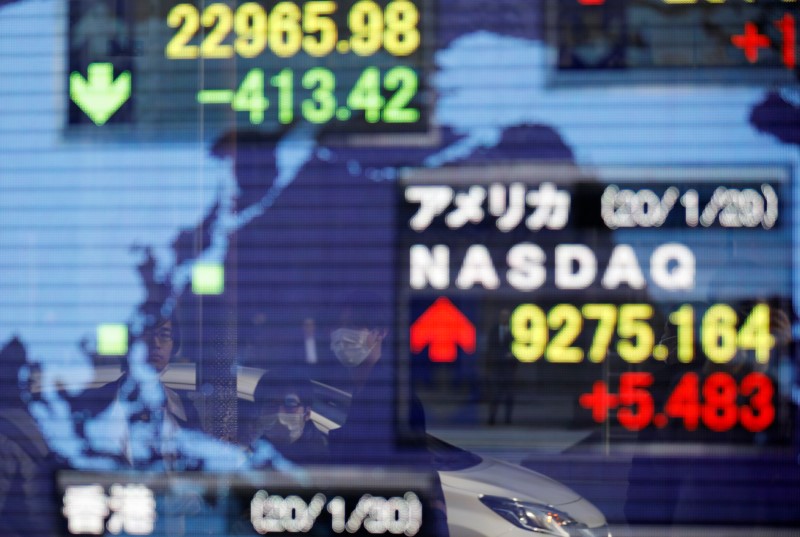 © Reuters. Pedestrians wearing facial masks look at an electric board showing stock averages of Japan’s Nikkei and the U.S. Nasdaq outside a brokerage at a business district in Tokyo

SINGAPORE (Reuters) – Asian stocks struggled to find their footing in volatile trade on Thursday, as the latest promise of stimulus from the European Central Bank propped up sentiment while the world struggles to contain the coronavirus pandemic.

MSCI’s broadest index of Asia-Pacific shares outside Japan () dipped 0.25% amid choppy trade throughout the region, with Australia’s benchmark () running as much as 3% higher before returning to flat and Korea’s Kospi () gyrating.

The ECB will buy 750 billion euro ($820 billion) in bonds through 2020, with Greek debt and non-financial commercial paper eligible under the program for the first time.

“It’s given us a shot in the arm,” said Michael McCarthy, chief market strategist at brokerage CMC Markets in Sydney, but he added he expects it to be short-lived.

“This is about the impact on demand and the disruption of global supply chain…(bond buying) is not speaking directly to the key problem for markets. I doubt very much this is a turning point,” he said.

Underlining the fragility of sentiment

Overnight on Wall Street, the S&P 500 () fell 5% and is down nearly 30% over a month. Household-name blue chips plunged, with General Motors (N:) and Boeing (N:), each symbols of U.S. industrial might, losing more than 17% in a single day.

Benchmark U.S. 10-year Treasuries (), usually a haven in times of turmoil, suffered their sharpest two-day selloff in nearly 20 years. Gold is down 3% for the week and oil fell to an 18-year low as quarantine lockdowns spread across the globe.

In currency markets, the dollar is king and jumped to a three-year high overnight amid a rush for the world’s reserve currency in times of crisis.

On Wednesday, the virus outbreak worsened. Italy reported the largest single-day death toll from coronavirus since the outbreak began in China in late 2019.

It has killed more than 8,700 people globally, infected more than 212,000 and prompted emergency lockdowns on a scale not seen in living memory.

“It is serious. Take it seriously,” German Chancellor Angela Merkel told her nation in a televised speech amid the shutdown of almost everything except bakeries, banks, pharmacies and grocers.

But so far none of it has been able to put a floor under dire sentiment, and some $15 trillion in shareholder value has been wiped out in little more than a month of heavy selling.

The U.S. economy could shrink 14% next quarter, a JP Morgan economist said on Wednesday, one of the most dire calls yet on the potential hit to the United States.

“I’d say the market is uninvestable at this point,” said Daniel Cuthbertson, managing director at Value Point Asset Management in Sydney. “Until we get a containment of global contractions, the market is just going to be directionless.”

On Thursday, the Reserve Bank of Australia pumped a record $7.4 billion into the banking system and is due to make an out-of-cycle policy announcement at 0330 GMT.

Investors are also looking to a March German sentiment survey due at 0900 GMT and U.S. jobless figures due at 1230 GMT for early signals on how the virus is hitting two of the world’s economic powerhouses.