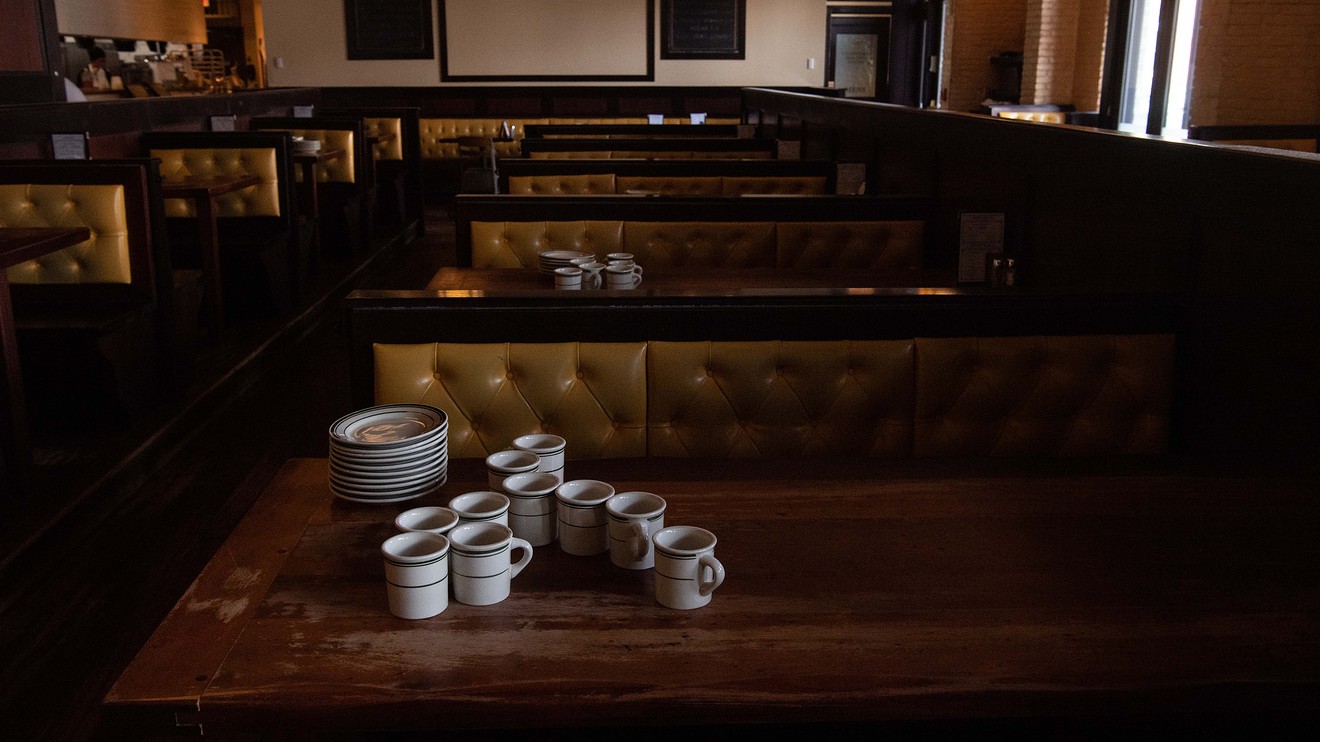 Consumer interest in restaurants and nightlife has taken a nosedive in the new coronavirus economy, new Yelp data shows, as some state and local governments have forced temporary closures of bars and dine-in service in the name of social distancing.

The data, released Friday by Yelp YELP, +6.94%, revealed that consumer interest had declined 54% for restaurants and 69% for nightlife venues. Cafes, French restaurants and wineries decreased their share of daily consumer actions (down 66%, 47% and 44%, respectively) compared to a week earlier.

In contrast, grocery stores (up 102%), fruit and vegetable shops (up 102%), fast-food joints (up 64%) and pizzerias (up 44%) all had a greater share of daily consumer actions versus a week earlier.

Report author Carl Bialik, Yelp’s data-science editor, said “consumer interest” was measured by “daily U.S. counts of a selected set of the many actions people take to connect with businesses on Yelp, such as viewing their business page or posting reviews.”

“To pinpoint how the coronavirus is affecting the economy, we looked at which types of businesses (categories) have risen or fallen in interest relative to others in the same general line of business (root categories),” Bialik wrote. “So, for instance, we compare French restaurants, dim sum places, and pizzerias to each other, in terms of their share of all interest for restaurants.”

A study by J.P. Morgan Chase pegged the median cash buffer for a small business at just 27 days.

Consumer interest in bowling, yoga and martial arts, which tend to involve groups of people, declined by a respective 43%, 38% and 33%, according to the report. On the flip side, interest in home fitness equipment surged 344%, and interest in parks rose 53%. Interest was up 360% for buying guns and 166% up for buying water; breweries were down 61%.

Yelp announced a series of actions Friday aimed at boosting local businesses, including a $25 million relief effort for local restaurant and nightlife businesses “in the form of waived advertising fees, and free advertising, products and services.”

Lawmakers in a number of cities and states, including New York, New Jersey, California and Pennsylvania, have ordered the temporary closure of restaurants and bars to help slow the spread of the COVID-19 disease, which had sickened at least 14,631 people and killed at least 210 in the U.S. as of Friday afternoon. Takeout and delivery services are generally still allowed for businesses that can offer them.

“The changes, like the pandemic that spawned them, haven’t hit all of the U.S. in the same way: California and New York, sites of two of the biggest outbreaks, have shifted in line with the national moves much more than Oklahoma and North Dakota,” Bialik wrote of the Yelp data. “Regionally, the impact is biggest near the coasts, particularly the Northeast, and more muted in the Midwest and Southeast.”

As public-health officials urge Americans to stay home as much as possible, small businesses have taken a substantial hit. A 2016 study by J.P. Morgan Chase JPM, -2.39%  pegged the median cash buffer for a small business at just 27 days.