Home
Stocks
Market Extra: Investors are cashing in from following the Fed this chart shows
Prev Article Next Article

Investors are sticking to the mantra of follow the Fed – buying any securities and assets eligible for the central bank’s asset purchasing and emergency lending programs set up to combat the coronavirus pandemic. 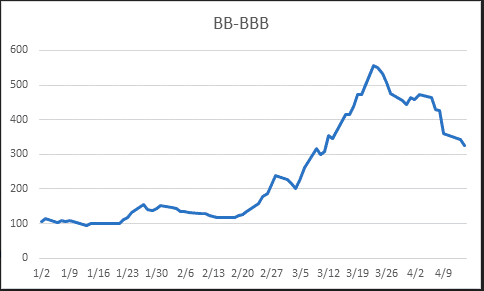 The gap between investment-grade and junk tightens

Bond-market strategists at BCA Research say the gap between BBB and BB-rated corporate debt remains “the best indicator to follow to see if the Fed’s extension of its bond purchase program to high yield is working to reduce borrowing costs for lower-rated U.S. companies.”

Last Thursday, the Fed expanded the scope of its corporate debt lending facilities to buy BB-rated bonds to help companies that fell from investment grade to “junk,” or fallen angels. The worry was failing to extend aid to these cohort of businesses could create a cliff-edge effect, where borrowing costs for some of these larger borrowers like Ford could surge and tighten credit conditions.

Though the Fed’s corporate bond-buying program only got off the ground on March 23, the spread between BBB and BB bonds have nearly halved to more than 3 percentage points since they widened to around 5.50 percentage points in mid-March, based on indexes tracked by Bloomberg.

The Fed can buy exchange-traded funds targeting a broader universe of junk debt beyond fallen angels, but the size of the facility makes it unlikely that the Fed will hold a significant chunk of U.S. sub-investment grade debt.

Moreover, the central bank’s guidelines for the lending program says the Fed will buy such ETFs only when their are gaps between their price fall far below the value of their underlying securities.

Opinion: These stocks may bounce as the Federal Reserve buys junk bond ETFs, according to Jefferies

Either way, investors are making hay.

The iShares iBoxx $ High Yield Corporate Bond ETF HYG, -0.41% is up 4.5% this month, but down more than 8% for the year. Equities have also soared on the combined lending and aid packages deployed by the Fed and the federal government, with the S&P 500 SPX, +0.56% gaining 8.3% in April.

“Historically, [following the Fed] is usually a good bet. You saw that in the U.S., and you did see that over in the last decade in Europe,” said Jeffrey Cleveland, chief economist at Payden & Rygel, in an interview. “Investors learn from those lessons until they don’t work.”