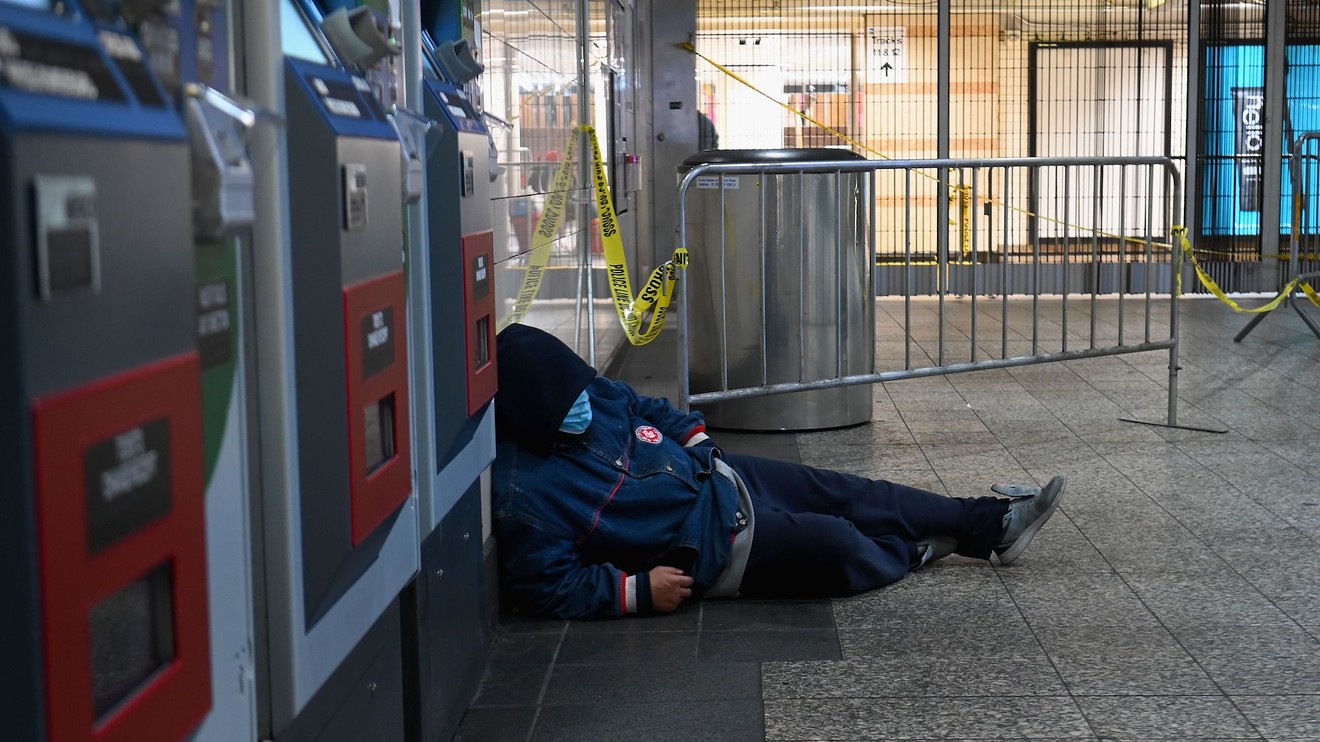 New York’s shelter-in-place mandate has pushed millions of New Yorkers inside. But for the city’s homeless population, that’s meant a choice between crowded shelters, the street and, increasingly, the subway system.

Both Mayor Bill de Blasio and Gov. Andrew Cuomo on Wednesday called for action to help address overcrowding in shelters and worsening conditions on public transit. That includes outreach on trains and temporary lodging for homeless individuals, but some advocacy groups say it’s not enough.

Transit officials also issued new guidelines for subway riders later on Wednesday, according to the New York Times. New restrictions ban wheeled carts from the system and limit riders to one hour in a subway station.

They also can’t remain on the train or platform after a train has been taken out of service.

“I want to be clear the status quo has been completely unacceptable,” Sarah Feinberg, the interim president of New York City Transit, which operates the subways and buses, told the Times. “It’s my job to make sure everyone who rides our system feels safe and secure and that our workforce feels safe and secure.”

The MTA did not immediately respond to requests for comment.

As city officials have worked to relocate homeless individuals from trains, they are also working to expand temporary housing options.

More than 6,000 homeless people have been moved to hotels from shelters in New York City, de Blasio announced on Wednesday morning. The city plans to relocate another 1,000 this week, he added.

“There’s going to be a constant effort to evaluate all shelters, and wherever there are social distancing problems, continue to take people out of the shelters and into hotels,” he said.

In addition, the city is prepared to move up to 1,000 individuals per week going forward as shelters struggle to provide housing for its more than 57,000 residents while maintaining physical distancing protocols. However, many shelter residents benefit from services provided there, making the shelter a better option than a hotel, de Blasio explained.

“But we’ve got to make sure there’s enough space…[and] that we strike that balance,” he said.

In New York state, 299,691 cases of the coronavirus have been reported, with close to 165,000 of them reported in New York City, according to the state’s health department. More than 18,000 people have died throughout the state, and there have been 12,774 fatalities in the city.

De Blasio also announced Wednesday that health services will be expanded at shelters. New York City Health + Hospitals Corporation will be providing medical oversight at all city Department of Homeless Services sites, and will start testing all residents for the coronavirus.

Anyone testing positive for the virus will immediately be isolated and receive medical attention, according to the mayor.

“This initiative will begin this week and…the goal is to reach the entire shelter system by the middle of May,” he said.

At the same time, the city and state are working to address the “deterioration of the conditions in the subways,” where growing numbers of homeless people are living. Cuomo called the situation “filthy” and “disgusting” in his daily news conference Wednesday.

With ridership down during the state’s shelter-in-place mandate, homeless people are taking over train cars to sleep and store all their possessions, he said. And despite overall ridership having decreased 90%, crime rates on the subway have increased, he said.

Indeed, the number of robberies in the subway system was 51 in March, up from 33 for the same month the previous year, the New York Police Department reported last week.

In response to these deteriorated conditions in the subways, Cuomo said he has asked the Metropolitan Transportation Authority (MTA) to come up with a plan to disinfect every subway car once every 24 hours.

“Any essential worker who gets on a train should know that that train was disinfected the night before,” the governor said. The MTA plan is due on Thursday.

Meanwhile, Cuomo announced the state will test 1,000 transit workers for antibodies to help further determine the spread of infections among frontline workers. Antibody tests are also being provided for first responders and other essential workers.

De Blasio has also recommended closing 10 end-of-the-line subway stations nightly to thoroughly disinfect the spaces and allow police and city outreach workers to meet homeless individuals as they are getting off trains.

“It will change the pattern that has existed for decades in this city where a homeless individual could ride a subway line back and forth and back and forth,” de Blasio said. Current conditions are a “clarion call to help them, to do more to get them out of the subways, off the streets, into long term shelter, into affordable housing.”

“During this pandemic, many homeless New Yorkers are rightfully afraid of crowded congregate shelters, where COVID-19 continues to spread,” Giselle Routhier, policy director at Coalition for the Homeless, said in a statement. “More policing won’t stop homeless individuals from taking refuge in the subways because it doesn’t address what people actually need: safe, private space so they can take the advice of health officials to maintain social distance.”

The way to combat the situation is to continue to put homeless individuals in area hotels, Routhier and de Blasio said.

“The city could open up thousands of hotel rooms and offer every single person on the subway access to them, if only Mayor de Blasio had the political will,” Routhier added.