Home
Stocks
Autotrader: What it’s like to drive a Tesla Model Y
Prev Article Next Article
This post was originally published on this site 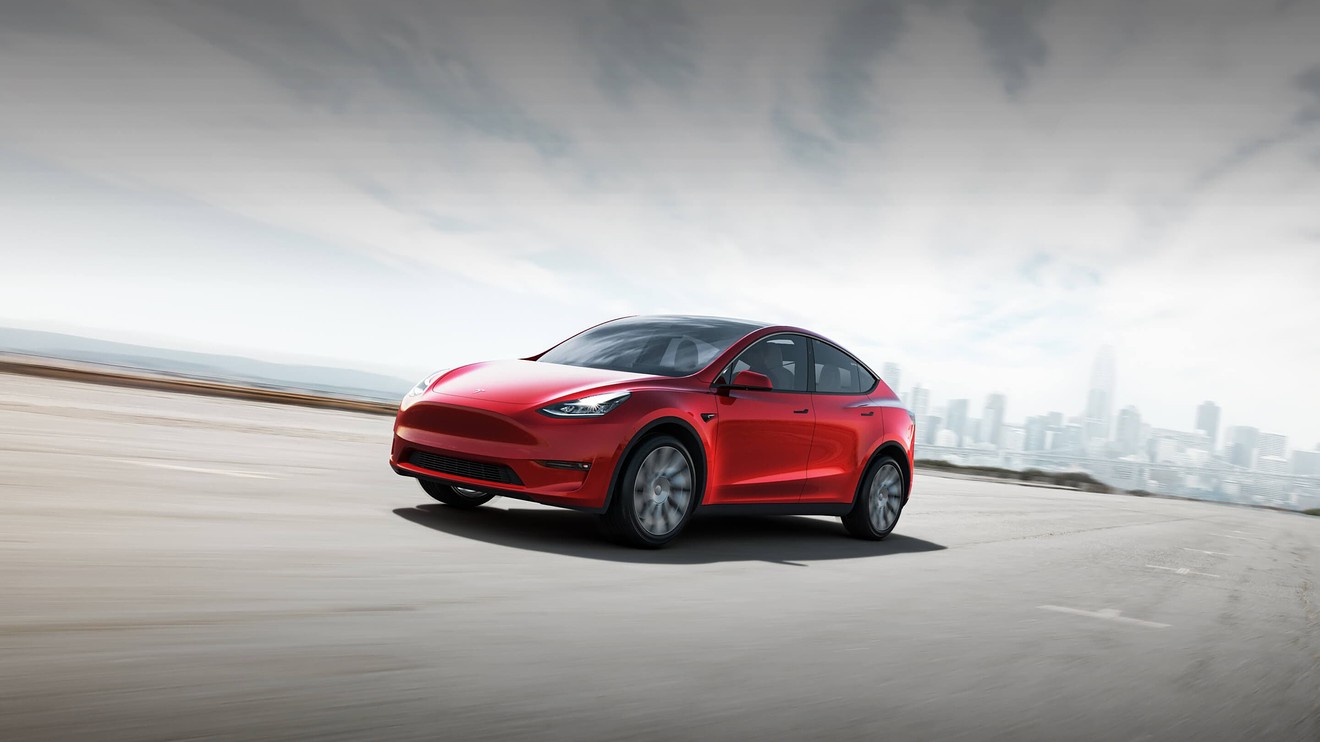 The 2020 Tesla Model Y is a premium all-electric crossover/SUV that shares its fundamental structure with the Model 3 sedan. However, it is taller, with more interior space, has seating for up to seven and it costs $4,000 more than the Model 3. Like many small crossover vehicles, the Model Y has family-friendly functionality via reclining rear seats, a roomy cargo area and a hatchback design.

Price aside, the 2020 Model Y is impressive thanks to lots of electric thrust, over-the-air vehicle updates and a tech-rich driving experience. Like the Model 3, the Model Y uses one big touchscreen for nearly all secondary vehicle controls. Is that good thing? It’s a split decision — some Autotrader editors say yes, others say no.

The Model Y Long Range has about a 316-mile range. The Performance version reduced that estimate by just one mile. Both use two motors with all-wheel drive. Power comes from a 75-kWh lithium-ion battery pack.

You can charge the Model Y via a standard household-style outlet but a 240-volt home charger is quicker. Tesla owners also have access to the company’s Supercharging facilities, where a full charge can take about an hour. This is free for Tesla customers.

Since the Long Range model is first to be released (Tesla says a less expensive 2-wheel drive version is coming later), a 300+ mile-range is standard for 2020. A keycard or phone access is part of the Model Y experience, too.

Related: How to choose trim levels and options when buying a new car

The 19-inch wheels come standard, while 20-inch are a $2,000 option. Tesla also offers a “performance upgrade” for the Model Y Performance trim. Choosing that option adds a lowered suspension, 21-in wheels and performance brakes to the exterior roster.

Inside, there are 12-way power front seats, heated front and rear seats, 4 USB ports, a glass roof and large 15-in touchscreen/info display. That display has a native navigation system, games and the ability to stream YouTube, Hulu and Netflix NFLX, -3.38% .

Pearl White is the standard color, but four others are offered as added cost options. A tow hitch is available for $1,000.

Leather and wood-look interior is standard, but the seats are covered with an animal-free artificial leather. The Tesla order form allows only the choice of a 5-seat interior, but a 7-seat option is noted but cannot be selected. Essentially, this is a third row of seating. The price for that option will be $3,000 when it’s available.

A standard range model will arrive later. This should be priced closer to the $40,000 mark than the Long Range model that’s available first. No word on the range, but we’re guessing about 225-250 miles.

The Model Y has not been crash-tested.

Like most electric cars, the Model Y delivers brisk acceleration on par with a typical performance car. If you haven’t experienced the immediate and unrelenting thrust of electric power, and if that sounds intriguing to you, you should give it a try. Like all Tesla vehicles, the 2020 Model Y is propelled solely by electric motors. If it were a gasoline-powered car, horsepower would be in the 450 range.

Read: The top trends in automobile technology to look for in 2020

The Tesla Model Y is also fun on freeway onramps, where its low center of gravity (thanks to the floor-mounted battery) and quick steering ratio impart it with a sporting feel uncommon among most crossovers. In this way, it’s probably more similar to a Mazda, MZDAY, +5.69% and we totally mean that as a compliment. The ride can be a bit firm, but it’s not punishing.

Beyond steering efforts, Model Y owners can customize acceleration, regenerative braking intensity and vehicle-creep when the driver’s foot is removed from the brake.

Among the stopping modes, we prefer “hold.” Its heavy regenerative deceleration makes shifting your foot to the brake pedal generally unnecessary while also bringing the vehicle to a perfectly smooth stop every time.

Also see: These 3 EVs are the lowest cost to own over 5 years

We have mixed feelings about the large touchscreen. It’s a nice feature to have and clearly one of the biggest screen in any new car. We also like how it’s oriented in a horizontal fashion rather than the usual “portrait” or vertical orientation. However, we don’t like how every secondary function runs through that one screen. Tesla fans like to point out that voice controls can accomplish almost everything you can do with the touchscreen. However, using voice controls with people in the car or if you’re on a hands-free phone call is awkward. Just a few more hard buttons or gauges would really make the car feel more well-rounded.

Other cars to consider

2020 Jaguar I-Pace — With a starting price of just under $70,000, the I-Pace is pricier than the Model Y. Is the I-Pace a better car than the Model Y? Maybe. It’s not as quick but the interior comes off as more refined and more buttoned-down – in a word, it’s more luxurious.

2020 Audi e-tron – Audi‘s range is on the low end of the spectrum. Just over 200 miles isn’t much compared to the Model Y’s 300+. In fairness, Tesla suggests owners not charge their battery over 90 percent of full capacity. Still, even the Nissan Leaf can beat the e-tron‘s range. Where the Audi shine is interior quality. The Model Y feels quicker than the e-tron, so that’s something to consider.

2020 Lincoln Aviator Grand Touring – It’s not fully electric, it’s partly electric. For about 20–25 miles, the Aviator plug-in hybrid electric runs on just electricity. When the small battery pack is depleted, it turns into a more conventional gas/electric hybrid. In that configuration, the Aviator packs 494 hp and 415 lb-ft of torque. It is more expensive than the Model Y, but it’s the most impressive luxury 3-row SUV we’ve driven.

Used Tesla Model X – A 2016 or 2017 Tesla Model X is about the same price as a new Model Y. Generally speaking, it will be a Model X 75D with 40,000 to 70,000 miles. We can’t make any promises about the reliability of those gullwing rear doors, but the Model X is bigger. Is bigger better? You have to decide.

We think the Standard Range Model Y is the most compelling version given the expected price and a fairly generous driving range compared to other EVs. If you absolutely have to have the newest, latest Tesla, then you probably don’t care about getting a bargain or how it stacks up against an Audi. Although pricey, the Long Range Model Y has everything we love about the Model 3 but with a bit more interior space.