Home
Stocks
‘My abusive soon-to-be-ex-husband is withholding my half of the stimulus check.’ Why some domestic-violence survivors still haven’t gotten relief payments
Prev Article Next Article 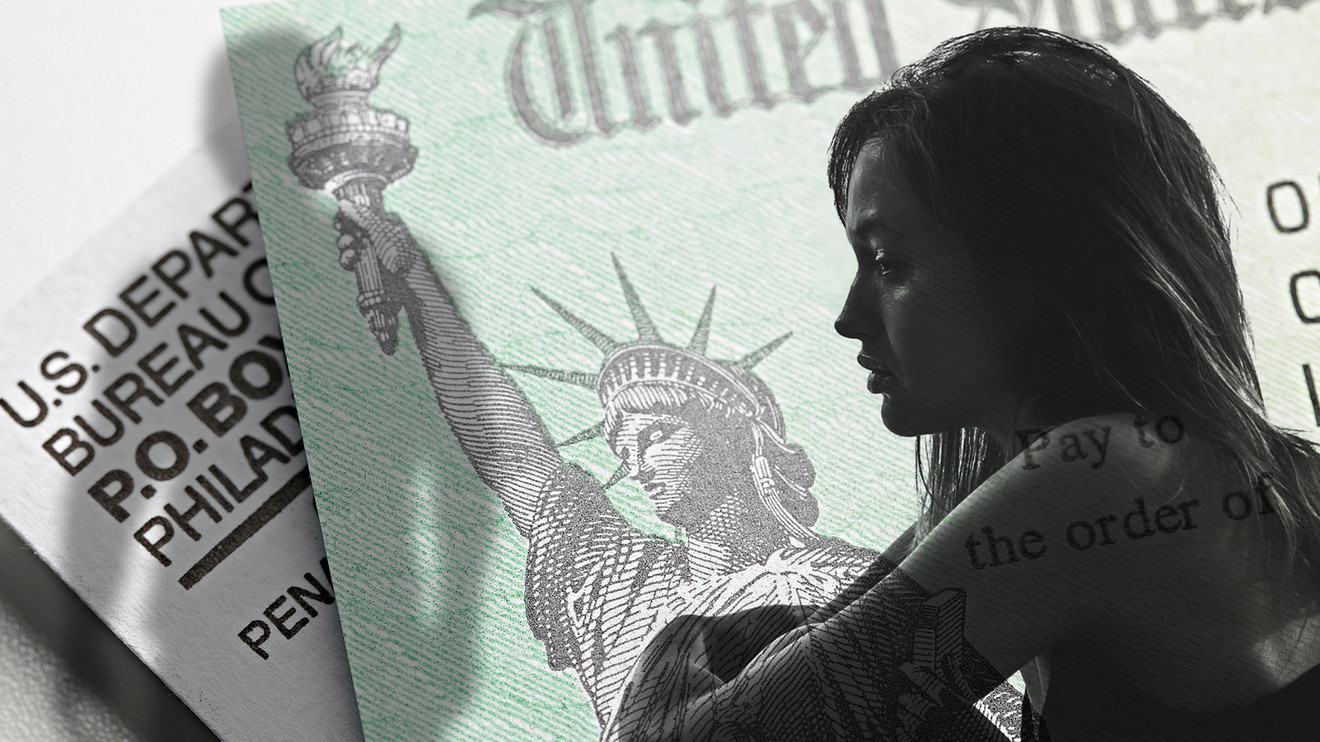 While millions of Americans have saved, spent or invested their stimulus checks, some domestic-violence survivors have found themselves deprived of the financial lifeline and often saddled with the knowledge that their abuser has the money.

Now, senators and advocates are pressing the Internal Revenue Service to send replacement checks to survivors and set rules that would prevent abusers from intercepting the cash if there’s a second round of stimulus checks.

“ ‘A stimulus payment can make a huge difference in financially easing the burdens many survivors and their children are facing with remaining safe and secure economically.’ ”

“A stimulus payment can make a huge difference in financially easing the burdens many survivors and their children are facing with remaining safe and secure economically,” said Sonya Passi, the founder and CEO of FreeFrom, an organization focused on increasing domestic-violence survivors’ financial security.

Without access to the money they’re entitled to, some survivors are forced to rely on their abusers’ financial support to support their children — and, Passi said, they worry that could one day be used against them in court. “The pandemic has caused many survivors to fall further into debt and placed even more limitations on their ability to financially seek safety from abuse and harm,” she told MarketWatch in an email.

It’s tough to quantify how many victims are missing out on the $1,200 payments and potential $500 payments per child. But it has happened frequently enough for tax lawyers and domestic-violence advocates to offer anecdotal evidence. Passi, who said her organization had heard from at least 40 survivors unable to access their stimulus payments, shared two such accounts.

“ ‘My abusive soon-to-be-ex-husband is withholding my half of the stimulus check as another way to control me.’ ”

“My abusive soon-to-be-ex-husband is withholding my half of the stimulus check as another way to control me,” one person said, according to Passi. “Due to this I am struggling to pay for fees that would allow me to move into a new place.”

“My ex-husband claimed me as a dependent on his taxes even though I made $11,000 of my own money in 2019, and provided child care for our toddler,” said another. “Now we are separated, and not only did I not receive any of the tax return, but I wasn’t eligible for the stimulus check either.”

These are just the people who were aware of the payment. “Harm-doers typically have access to survivors’ identifying information and bank accounts and use them to abuse, monitor and control survivors,” Passi said, “so if a stimulus check is deposited, the survivor may never actually see it.”

“ One survivor calling the National Domestic Violence Hotline said an abuser claimed $60 was half the stimulus check. ”

The National Domestic Violence Hotline’s advocate log reveals similar stories, turning up at least three specific mentions of stimulus-check trouble. One abuser tried convincing a survivor that $60 amounted to half the check, according to excerpts shared with MarketWatch. Another abuser refused to share the money for a divorcing survivor’s rent and car payment. Still another cashed the payment and bought a motorcycle, leaving the survivor to look after debts and two children.

A national COVID-19 economic-impact survey of 608 U.S. direct-service providers conducted by the Center for Survivor Agency and Justice and other partner organizations, meanwhile, estimated that about 40% of domestic and sexual-violence survivors served by those groups had mentioned concerns about stimulus checks.

Given that the vast majority of abuse victims report also experiencing financial abuse, “we can reasonably expect perpetrators who leverage financial dependency as a form of control are taking advantage of this additional opportunity,” said Teal Inzunza, the program director for economic empowerment at the Urban Resource Institute, a New York-based service provider for domestic-violence survivors.

Passi identified a handful of survivor populations that have encountered structural hurdles to receiving stimulus checks: those who lack a permanent address and/or are experiencing homelessness; those who weren’t involved in tax filing, who were unable to claim the kids as dependents because their abuser did, and/or whose financial abuse included tax fraud; unbanked survivors who used check-cashing services that took a cut of their check; and undocumented survivors, who were excluded from eligibility.

‘One more way the abuser is exerting control’

As it quickly cut stimulus checks, the IRS looked at 2019 tax returns to determine eligibility. If those returns weren’t yet filed, it looked at 2018 returns.

That means the agency could have been relying on outdated information and sending a stimulus check to an account controlled by an abuser or an address the survivor had left.

“ Sometimes the abuser is unilaterally filing a joint return and pocketing both stimulus checks. ”

Nancy Rossner, a senior staff attorney at the Community Tax Law Project, has seen this scenario unfold. Other times, the abuser and survivor have separated but the abuser unilaterally filed a joint return and pocketed both stimulus checks.

“This is one more way that the abuser is exerting control and power over the victim,” Rossner said.

She’s worked with approximately 15 domestic violence survivor clients who have been deprived of their stimulus check. But there’s no clear answer on how to fix the problem, she said, let alone do it quickly.

Rossner had advised clients to submit “superseding” tax returns by July 15. Those returns, treated as the most up-to-date version, can change the filing status to married, filing separately or head of household. Most importantly, they can include new bank account or mailing address information.

“ A taxpayer may be able to change bank account and mailing address information in a superseding tax return. ”

Even if someone missed the deadline, Rossner said they could still mail in a superseding return and a letter explaining the circumstances. This would at least trigger an IRS review of the original return and give a survivor an opportunity to dispute the first return’s validity, she said.

At the very least, a superseding return could set up survivors to receive the second payment, she said.

Sen. Catherine Cortez Masto, a Democrat from Nevada, and 35 of her colleagues sent a letter to the IRS last month urging the agency to make sure survivors get the money to which they are entitled. That followed a similar letter that Sen. Joni Ernst, a Republican from Iowa, sent the IRS in April.

The Cortez Masto letter contained recommendations, including a dedicated hotline where survivors could report misdirected stimulus checks, guidance about superseding returns and public explanations telling taxpayers what they should do if they aren’t with their spouse anymore. (The American Bar Association’s taxation section also wrote the IRS in May with suggested ways to help survivors, such as dividing money into separate bank accounts when underlying tax returns had paperwork instructing a split refund.)

During a late-June Senate Finance Committee hearing, Cortez Masto asked IRS Commissioner Charles Rettig what his agency had been doing “to get replacement checks to victims of domestic violence who are in desperate, desperate need right now.”

“ ‘Our people care, and they care a lot. …To have a victim of domestic violence also not be able to receive the payment, particularly at this time of need, does not sit well with us.’ ”

Rettig said the issue was a priority. “Our people care, and they care a lot,” he said. “To have a victim of domestic violence also not be able to receive the payment, particularly at this time of need, does not sit well with us.”

The IRS did not elaborate on any further steps it will be taking when reached for comment Tuesday.

A spokesman pointed to instructions for people to trace a stimulus check that has been issued but not received. Taxpayers can call the IRS, though they may experience long wait times. They can also start a trace by mailing a form — but if they’re married, both spouses need to sign.

‘The bottom is literally falling out from underneath people’

Advocates have been sounding the alarm since March over the pandemic’s potential to exacerbate conditions for domestic-violence survivors, citing early shelter-in-place orders that left many survivors confined in close quarters with abusive partners. Experts also warned about the specter of recession, which some studies have linked with increases in domestic violence.

Between March 16 and May 16, 24% of contacts to the National Domestic Violence Hotline mentioned experiencing economic or financial abuse. But financial or economic abuse was already fairly common among domestic-abuse survivors: In one frequently cited 2008 study of 103 survivors, “almost every woman had been involved with a partner who controlled her use of or access to economic resources and/or took advantage of her economically.”

Economic and financial control can be just as debilitating as physical abuse, Karma Cottman, the executive director of Ujima, Inc.: The National Center on Violence Against Women in the Black Community, told MarketWatch. “You pile on this public-health emergency, and it exacerbates the ways in which an abuser can exact financial control and economic abuse,” she said.

“ ‘[Survivors] can put money down on a deposit; they can rent a U-Haul or buy a plane ticket.’ ”

Domestic-violence survivors often use cash infusions — like tax returns — as a springboard toward safety, said Kim Pentico, the director of economic justice for the National Network to End Domestic Violence. “They can put money down on a deposit; they can rent a U-Haul UHAL, +0.89% or buy a plane ticket,” she said.

The $1,200 payments can make a significant difference in many survivors’ lives, said Kavita Mehra, the executive director of the New York-based domestic-violence organization Sakhi for South Asian Women, but that’s especially true when viewed within the current economic context of widespread food and housing insecurity. Of the survivors Sakhi works with who are employed, 90% are hourly-wage workers who live paycheck to paycheck, she said.

“ ‘The bottom is literally falling out from underneath people, and that money could provide longer-term support.’ ”

“The bottom is literally falling out from underneath people, and that money could provide longer-term support,” Mehra added.

One reason many survivors remain with their abusers is insufficient means to financially support themselves and/or their kids, advocates say. Some 73% of domestic-violence survivors report staying with an abusive partner longer or returning to that partner due to financial problems, according to a 2018 Institute for Women’s Policy Research survey of 164 individuals in 11 states and Washington, D.C.

‘There’s more for all of us to do’

Advocates urged policymakers to keep domestic-violence survivors in mind from the beginning, rather than addressing their needs as an afterthought.

“ ‘We’ve got to listen to survivors when we create policies.’ ”

“We’ve got to listen to survivors when we create policies — and if not survivors, then their advocates — so we can head some of these issues off instead of trying to do cleanup,” Pentico said.

The best resource right now for a survivor who hasn’t received their stimulus payment is community support, Passi said, including resources shared among survivors and fundraising by the broader community “to get money directly into the hands of survivors.” Survivors should reach out to community-based organizations and the domestic-violence hotline for help developing financial and physical safety plans, Cottman added.

People who aren’t in danger or dire financial straits must also do their part, Passi said: Her organization’s COVID-19 response guide suggests specific ways for communities and individuals, religious organizations, banks, employers, attorneys and other entities to support survivors.

“Survivors should not have to figure this out on their own,” Passi said. “There’s more for all of us to do.”