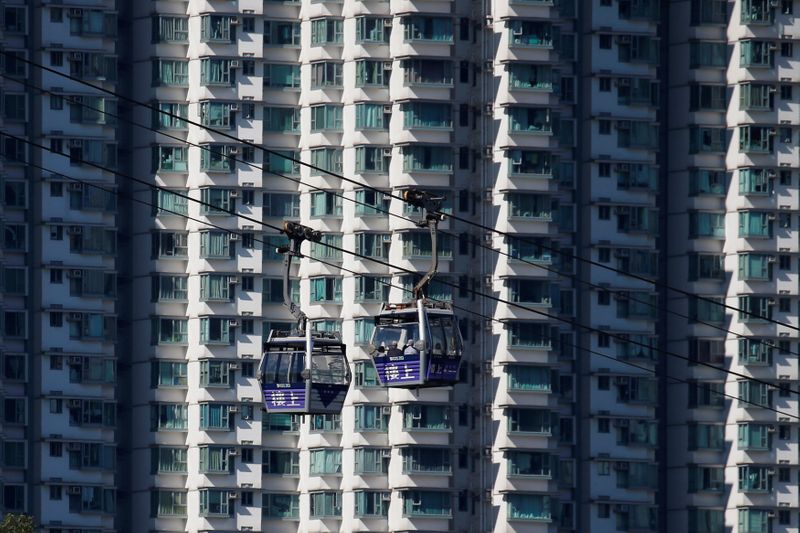 HONG KONG (Reuters) – Commercial lenders in Hong Kong say they are concerned about a 30% drop in building values over the past 12 months and will consider calling in or restructuring loans if values fall much further.

If lenders demand repayment of loans or try to tighten terms, it could set off a wave of property sales that might depress prices even further in the Chinese-run territory, which is already stuck in a recession due to the U.S.-China trade spat, violent street protests last year and the new coronavirus.

“The market is not going to get better in the next half to one year,” said a real estate investor who provides financing in the city. “If you’re in the Hong Kong market, I’d say de-risk if you can. Get your money back.”

Banks and non-bank lenders – the array of brokers and investment firms that make up the unregulated ‘shadow bank’ sector – have lent billions of dollars over the last few years in the world’s most valuable real estate market.

Lenders and borrowers were happy when prices were rising, but there is now widespread concern as values decline.

Mezzanine investors, firms which lend money in generally shorter time frames and at higher interest rates, are seen as most at risk.

Under Hong Kong Monetary Authority rules, banks cannot lend more than 40% of the asset value to commercial property buyers in order to minimize the damage caused by defaults. Mezzanine investors and other shadow banks are not bound by that.

“There are mezzanine investors that are overly aggressive in providing exceptionally high loan-to-value (LTV) at circa 80% against underlying assets’ true value,” said Ryan Chung, managing director at Huatai International, a major mezzanine investor in the city.

“Given office rental has retreated roughly 10% first half (of this year) and occupancy rate is on the soft side, it definitely impacts the asset valuation and potentially triggers financial covenants,” said Chung, referring to the conditions of loans.

Chung said some lenders are now demanding new property valuations in order to check that the latest value does not breach the LTV limit set out in the covenant.

Goldin sold a residential land plot this week for HK$3.5 billion in order to repay the debt, taking a HK$2.75 billion loss on its original investment. The creditors that lent the senior debt took possession of the 27-storey property.

Goldin bought the tower in 2018 from its chairman for HK$17 billion, making the total LTV ratio 60%. Goldin said this month the property had a market value of between HK$15 billion and HK$16.5 billion, but some valuers and creditors told Reuters that even a valuation of HK$15 billion – which would put the LTV ratio at 68% – was too high.

Falling valuations are worrying banks, which are discussing internally the gap between “economic realities and market valuations,” one executive at a major foreign bank with significant mortgage business in Hong Kong told Reuters.

Defaults have already happened, said the financing investor who predicted no improvement in the market, but banks are not disclosing them. “Everyone is rolling over (extending the loan due date) in hope things will get back,” the person said. That could work for another three to six months, he said, but after that the situation could be more serious.

Alfred Lam, chairman of the Hong Kong General Chamber of Property Finance, said his members were not yet calling in loans but there was rising worry.

“Our members are concerned,” he said. “Some of them previously lent at high LTV, if prices drop another 10%-20%, then even if you receive the asset you can’t cover the costs.”