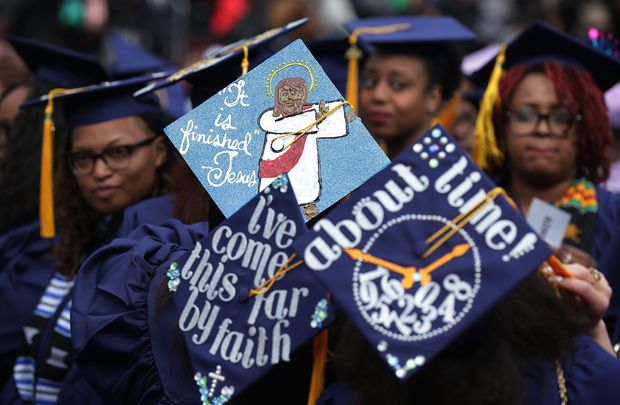 New research from New York City’s Department of Consumer and Worker Protection is the latest evidence documented the disproportionate impact of student-debt on Black borrowers. (Photo by Alex Wong/Getty Images)

Creating a life of financial security in New York City is notoriously daunting. A new report suggests that the effort New Yorkers are putting into that goal isn’t paying off equally.

At all levels of education, Black residents earn less than their white counterparts, according to an analysis released Wednesday by New York City’s Department of Consumer and Worker Protection. Black New Yorkers whose highest level of education is a bachelor’s degree earn $42,800 a year on average compared to $64,700 for their white counterparts — an annual gap of $21,900.

The report is the latest in a growing body of evidence that the promise of a college degree to work as an equalizer remains elusive. What’s more, America’s debt-financed higher education system is actually exacerbating racial inequality. Earlier research from the agency has found that in New York City neighborhoods that are predominantly Black or Hispanic, 16% of student-loan holders have debt in collections, compared to 8% of borrowers in predominantly White and Asian neighborhoods.

That concentration of high levels of student-debt collection in majority Black and Hispanic neighborhoods is replicated in other major U.S. cities. The gap in student-loan outcomes both in New York and elsewhere has reinforced the financial segregation baked into our credit markets by decades of discriminatory policies.

“This issue of student-loan debt and student-loan debt in collections is connected to the racial wealth gap, the quality of schools that Black residents in New York City attend and what Black New Yorkers face when they enter the labor market,” said Nicole Perry, the agency’s deputy commissioner of the Office of Financial Empowerment. “This is an issue that is connected to decades-long systemic disparities in those areas.”

Centuries of exclusion from wealth-building

Centuries of exclusion from the resources white Americans have used to build wealth mean that Black families have fewer assets to tap when paying for college, so Black students tend to borrow more. In addition, historic disparities in education funding both at the college and kindergarten through 12th grade level mean that Black students are more likely to attend colleges that have fewer resources to get them to and through school than white students. College admissions policies that reinforce these inequalities also play a role in this dynamic.

Decades of predatory recruiting of Black students by for-profit colleges mean they’re also more likely to end up at these schools, which often are more expensive and have worse outcomes than their public or private counterparts.  Finally, well-documented discrimination in the labor market means that Black graduates tend to be paid less than their white counterparts with similar credentials, making that student debt more difficult to pay off.

“It’s almost like a cycle, they went to college, they did the thing we as a society tell them to, they’re not getting the benefits, but they still have the debt,” said Dominique Baker, an assistant professor of education policy at Southern Methodist University. “That can just sort of spiral. I can imagine in a place like New York, you’re going to still have the labor market discrimination that we see across the United States,” but a significantly higher cost of living, she added.

The disparate impact of student debt in New York City

All of these trends are evident in the Department of Consumer Affairs report. Black families in New York City have less access to housing wealth, a resource families sometimes tap to pay for college — the Black/white gap in home ownership in New York City is 15 percentage points, according to the report. Even when Black New Yorkers do own homes, other research cited in the report indicates that their houses are likely worth less than similar houses in predominantly white neighborhoods.

The report notes that Black college applicants’ limited access to wealth may also make it more difficult for them to access high-quality kindergarten through 12th grade schools, which in turn could impede their access to a high-quality college education. Four of the colleges in New York City with the highest share of Black students have some of the lowest rates of degree completion among New York City colleges, the report found. Five of the colleges with the highest share of Black students have student-loan repayment rates that are among the lowest in New York City.

All of these dynamics mean that Black New Yorkers struggle more to repay their student debt than their white counterparts.

The agency has been increasingly focused over the past few years on the impact of student-debt on the city’s residents and its disproportionate effect on certain communities. Wednesday’s report is the latest in a series of research officials have published on this topic. In 2018, the agency launched clinics to help New Yorkers get accurate information about their student loans and targeted the placement of those clinics in neighborhoods the research showed to be struggling disproportionately with their debt.

Student debt is “standing in the way of New Yorkers being able to build long-term financial health and to build wealth,” said Lorelei Salas, the commissioner of the Department of Consumer and Worker Protection.

Low-income New Yorkers may have to choose between paying a household bill or their student loan, Perry said, and if the debt falls into delinquency it can have a negative impact on their credit.

Perry feels fortunate to have been able to stay current on her student loans, but the roughly $135,000 in debt that she’s carrying from college and graduate school has forced trade offs over investing and saving for a more secure retirement.

Part of Perry’s calculus when she took on the debt both for room and board as an undergraduate — a scholarship covered tuition — and for graduate school was that it would be an investment in her economic mobility. In particular, when Perry was choosing where she would pursue her MBA, she considered the impact that centuries of systemic racism and inequality could have on her future.

Perry, who graduated from The Wharton School at the University of Pennsylvania, wanted to attend a graduate school that would both help her build her skill set and have the type of brand that would increase the odds that someone would pick up the phone when she called or take a look at her resume. She wanted to go somewhere that would create, “the same opportunities my peers would have regardless of race,” she said.