Interest rates have just as much a chance of declining as rising. Many of you will have difficulty accepting this. The almost-universal narrative these days is that, because U.S. rates are at record lows — close to zero, in fact — their path is undoubtedly up. Bonds in turn will suffer.

But this widely-held narrative fails to take into account both inflation and taxes. Once you do, it becomes clear that interest rates now aren’t even close to being at all-time lows — as you can see from the chart below. 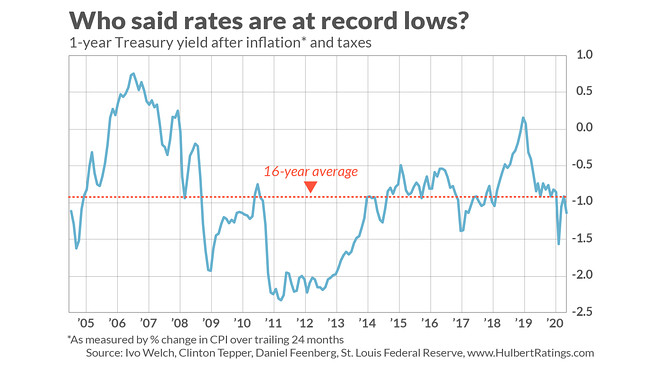 So if you’ve been avoiding bonds in the belief that rates will rise, you may want to reconsider.

Read: Here are your odds that stocks will outperform bonds over the next 20 years

These conclusions emerged upon my applying the insights of research circulated two years ago by the National Bureau of Economic Research. Its authors were Daniel Feenberg, a research associate at NBER; Ivo Welch, a finance professor at UCLA, and Clinton Tepper, a Ph.D. student in finance at UCLA. I have updated their analysis with current data.

This isn’t the first time that I have reported the investment implications of their research. The most recent occasion was in early May, when the one-year Treasury yielded 0.16%. The comparable rate today is 0.14%. Other parts of the yield curve also have since declined — a positive for bond investors. Since that early-May column was published, the Vanguard Total Bond Market Index Fund VBMFX, -0.17% has produced a gain of 3.3% while the iShares Core U.S. Aggregate Bond ETF AGG, -0.09% has gained 3.1%.

Most bond investors recognize why it’s important to focus on interest rates on an after-inflation basis, though many do so only when reminded. For example, when contemplating an historical chart of the one-year Treasury rate, most of my clients drool when noticing that in the late 1970s and early 1980s this rate rose to more than 15% — more than 100 times the current level.

Yet they forget that inflation also was in double-digits at that time. In real (after-inflation) rather than nominal terms, the one-year Treasury rate in that earlier era was actually lower than it is today. To overlook inflation is to be guilty of what economists call “money illusion” (or inflation illusion).

Even fewer bond investors focus on the impact of taxes. But the authors of this new research show that the market accounts for taxes when setting yields. So it’s important that we do the same when assessing where rates stand in an historical context.

When applying the researchers’ adjustment methodology, the current one-year Treasury rate on an inflation- and tax-adjusted basis is minus 1.1%. That’s only slightly lower than the past two decade’s average of minus 0.9%. (For the statistically minded: The current after-tax and after-inflation one-year Treasury yield is only 0.29 of one standard deviation below the two-decade average. As a rule of thumb, something isn’t considered significantly different from the average unless it is two standard deviations above or below the mean.)

The corollary of this research is that we shouldn’t be so quick to assume that the bond market is wrong. I am struck by the number of investors who readily concede that they can’t beat the stock market but then confidently predict that interest rates will rise. That is the functional equivalent, of course, of thinking they can beat the bond market.

We should never forget that the bond market is even larger than the stock market and arguably more efficient. Some of the best and brightest on Wall Street are making highly leveraged bets on interest rate movements of less than one basis point (one hundredth of one percent). While it’s always possible that you will be right and the market wrong, you should always ask yourself what you think you know about interest rates that the rest of the bond market doesn’t.

Read: Record negative ‘real yields’ are driving a crowded rally in stocks, gold and everything else

Plus: This stock-market indicator produced a ‘timely’ buy signal in March, and now its message is “sell”