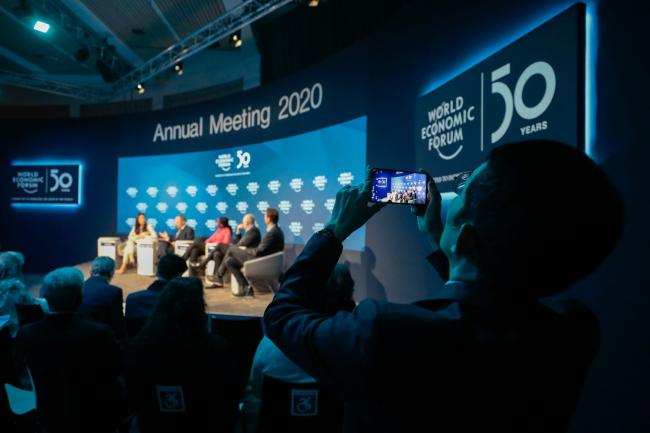 The World Economic Forum said the coronavirus has forced it to delay its high-profile gathering of global business and financial leaders in the Swiss resort of Davos until early next summer.

Normally held each January in the ski town, the gathering has attracted political leaders including U.S. President Donald Trump and German Chancellor Angela Merkel, as well a parade of billionaires, executives and celebrities to debate global challenges.

The most recent installment drew 3,000 participants from 90 countries, plus legions of support staff and hundreds of journalists. Nearby hotels host glamorous receptions to complement the debates held in the town’s conference center.

Next year’s event — titled “The Great Reset” — was intended to discuss how to shape the post-virus economy. Despite the urgency of that conversation, “the advice from experts is that we cannot do so safely in January,” WEF said in a statement on Wednesday.

Founder Klaus Schwab told Bloomberg Television earlier this month that while planning for the event was underway, it wasn’t clear what form it would take or when it would happen.

The Forum now intends to hold a series of digital “Davos Dialogues” in the week of Jan. 25 to allow global leaders to share their views virtually.

It’s not the first time WEF has budged from Davos. Its 2002 meeting was held in New York, to show solidarity following the Sept. 11 terror attacks.

The event has attracted local opposition in the past over the disruption and cost of policing the presence of so many wealthy and high-profile delegates.

Still, the postponement will be an economic blow to the hospitality industry. The event generated an estimated 94 million francs ($103 million) in revenue for Switzerland in 2017, according to a University of St. Gallen study. It garnered 2 million francs in tax revenue for the town.