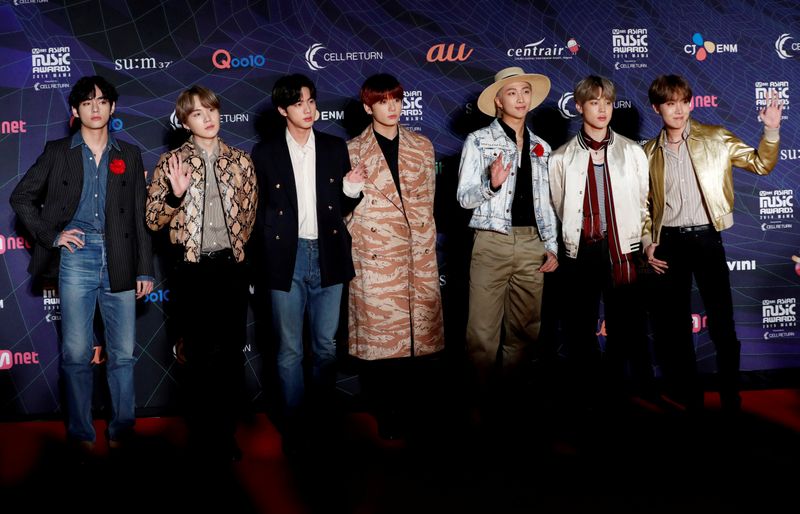 SEOUL (Reuters) – Big Hit Entertainment, the management label for K-pop sensation BTS, saw robust but not spectacular demand in the first of two days of share offerings for retail investors, with sentiment hurt by increasing talk that the band’s members may have to complete military service.

In South Korea, all able-bodied men aged 18 or above are obliged at some point to serve in the military for about 20 months.

But there has also been discussion within parliament that the band, which has just become the first South Korean group to reach No.1 on the U.S. Billboard Hot 100 singles chart with the song “Dynamite”, could be granted an exemption as it has successfully promoted the country’s image abroad.

Individual investors on Monday submitted orders for 89.6 times the amount of stock made available to them worth some 8.6 trillion won ($7.4 billion), said lead arranger NH Investment & Securities.

That is about half the value of bids made on a record first day of retail bids in the recent listing for South Korean game developer Kakao Games.

“Demand is very strong, its just not as earth shattering as some had expected,” said Hwang Hyun-jun, an analyst at DB Financial Investment.

With plenty of liquidity in the market, some analysts had predicted gross bids from retail investors could hit 100 trillion won ($85 billion).

Offering about 20% of the company in its IPO, Big Hit Entertainment, led by CEO Bang Si-hyuk, is set to raise 962.6 billion won ($830 million). In the institutional portion of the offer, investors expressed interest in more than 1,000 times the number of shares on offer.

The label is due to make its market debut on Oct. 15.