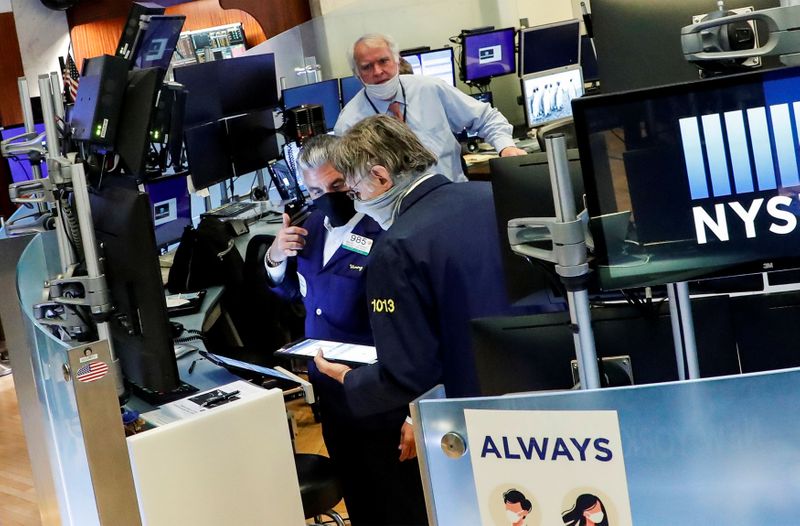 NEW YORK (Reuters) – On Tuesday night, James McDonald plans to sit among 19 computer screens in his Los Angeles office, waiting for the right moment to pounce on what he hopes will be one of his most profitable trades of the year.

That moment will come when the winner of the U.S. election becomes clear, he said.

The chief executive of hedge fund Hercules Investments has set up a trading strategy geared to benefit from a momentary spike in volatility he believes will occur when investors adjust their positions in response to the election result.

Those kinds of gyrations are just the thing that Salem Abraham, president of Abraham Trading Company, is seeking to guard his portfolio against. A ranch owner and fund manager based in Canadian, Texas, Abraham plans to keep two of his firm’s traders on the phone as he watches the election results from home, ready to pare back on U.S. stock futures if markets appear set for a plunge.

With the market swings that followed President Donald Trump’s unexpected victory in 2016 still fresh in investors’ minds, many have spent the last several weeks reducing their exposure across assets and hedging their portfolios against post-election volatility, while a few have developed strategies that could produce handsome profits – provided they work.

“This is one of the biggest events of the year,” said Dennis Dick, proprietary trader at Bright Trading LLC. “The uncertainty here makes the trading interesting.”

On the night of Nov. 8, 2016, U.S. stock futures dropped as much as 5%, the Mexican peso sold off and haven assets such as gold rallied as investors scrambled to reposition their portfolio for a Trump presidency.

The following day, however, the S&P 500 (SPX) gained more than 1% while the Cboe Volatility Index (VIX), Wall Street’s “fear gauge,” plunged more than 7 points from its session high of 21.48.

A night of sharp market moves would suit McDonald just fine. His strategy involves long and short positions on futures on the S&P 500 (SPX) (ESc1) and the Nasdaq-100 Volatility Index <.VOLQ> . As the election results become clear, he expects that half of his investment will produce outsized gains even if the remainder incurs losses, which he seeks to limit using stop-loss orders.

“There’s a big profit opportunity once we know who the president is,” McDonald said. “We want to capitalize on that big inflection.”

Others have prepared strategies that could benefit should volatility persist into Wednesday’s trading.

EAB Investment Group has recommended options strategies on credit and currency exchange-traded funds for clients, said Arnim Holzer, the firm’s macro and correlation defense strategist. Should the race appear tight in battleground states such as Florida and Pennsylvania, he expects high-yield bonds to underperform and the yen and Swiss franc to rally.

Analysts at TD Securities estimate the S&P 500 could climb 3% and 10-year Treasury yields could rise 15 basis points on Wednesday if Democratic nominee Joe Biden wins the presidency and his party wins 51 seats in the Senate, while the benchmark index could rise 1% and 10-year yields drop 10 basis points if Trump wins and Republicans keep control of the Senate.

An unclear election outcome, however, could result in more severe moves that day, with the S&P 500 tumbling as much as 5%and yields on the benchmark 10-year Treasury note falling by 15 basis points.

Some investors will seek to add to their favored positions should asset prices fall.

Garvin Jabusch, chief investment officer of Green Alpha Advisors, raised his cash allocation in order to add to holdings of renewable energy shares should they pull back. Clean energy stocks have soared in the past two months, mirroring Biden’s lead in polls.

“We’re keeping some dry powder to buy back those bargains,” Jabusch said.

Yet some are wary of jumping into the market immediately after the election.

Mike Zigmont, head of trading and research at Harvest Volatility Management, said he had temporarily sold off his portfolio, which includes short options positions, in order to bypass any market whiplash.

“This particular event is so wrapped up in emotion and so complicated and so cloudy that it throws all kinds of risk into the mix that we just don’t usually come across,” Zigmont said.