Home
Stocks
Need to Know: Don’t be a pig — GameStop advice as Robinhood reopens the spigot
Prev Article Next Article

If nothing else, America’s new investing class got a blunt education that brokers can, and do, refuse orders. Robinhood and several other brokerages on Thursday refused or limited trading in GameStop and other stocks that have been surging due to interest from retail investors looking at Reddit and other social-messaging services.

“If your trades are causing the broker to take on ‘unreasonable risk,’ then they will either offer a terrible spread or refuse the order,” points out Tim Vollans of the Macrodesiac blog. “If a retail broker can’t pass the order on there is no trade. It takes two to tango, and the deep pockets decided not to play anymore.”

Robinhood said it had to act to meet its own capital requirements and clearinghouse deposit obligations. (Here’s a good Twitter thread explaining these rules.) But after raising more than $1 billion this week and tapping credit lines from its banks, the number-one app on both the Apple AAPL, -3.50% and Android GOOGL, +1.88% stores in the U.S. says it is ready to allow limited buying again. So is there still time for one last hurrah?

Down 44% on Thursday, videogames retailer GameStop GME, -44.29% was rallying in premarket trade — up 82%– and movie-theater chain AMC Entertainment AMC, -56.63%, another Reddit board favorite, was surging too. It is also the final day of the trading month, so beaten-up hedge funds that have been betting against the company will be less inclined to put fresh money to work.

Jani Ziedins of the Cracked Market blog says both sides of the GameStop trade have been too greedy. “The problem is when these people are sitting on a mountain of profits, rather than thank their lucky stars and lock-in these once-in-a-lifetime profits, they are too busy gloating and taunting the other side. Instead of being satisfied with nearly $500, bulls insist on waiting until this goes all the way to $1,000. And bears that captured a 77% tumble in 120-minutes, rather than jump on this historic move, they demanded it to go all the way to $5.

“And you know what, both sides are equally guilty of holding too long and letting these historic profits evaporated before their very eyes. As the saying goes, ‘Bulls make money, bears make money, and pigs get slaughtered.’ Don’t be a pig and take these spectacular profits when you have them. Because if you don’t, they will almost certainly be gone in a few hours.” 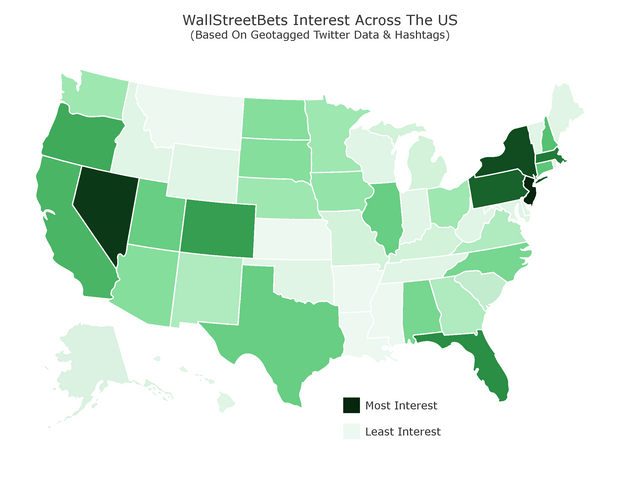 So where are the people who are on the Reddit Wall Street Bets based? According to bitreporter.com, which looked at geotagged Twitter TWTR, +7.01% data over the last month, the two top states are New Jersey and Nevada, where not coincidentally, gambling is legal. That fits with another research paper that finds a connection between actual gambling and so-called stock-market gambling.

Novavax NVAX, +2.16% shares jumped 65%, as the U.S. biotech said its COVID-19 vaccine was effective against coronavirus and the new U.K. strain, though not the South African variant. Johnson & Johnson JNJ, +0.76% traded lower after saying its single-dose coronavirus vaccine was 66% effective in all of its trials and 72% effective in the U.S. — news that sent rival vaccine makers Pfizer PFE, +0.03% and Moderna MRNA, +2.45% higher.

Not everyone is pleased with the sudden interest in stocks.

The inspirational tale of Bud the female parrot, who can fly again after her new owner cut potato chips from her diet.

Streaming service Spotify SPOT, -1.44% has patented technology to suggest songs based on mood.

Want more for the day ahead? Sign up for The Barron’s Daily, a morning briefing for investors, including exclusive commentary from Barron’s and MarketWatch writers.